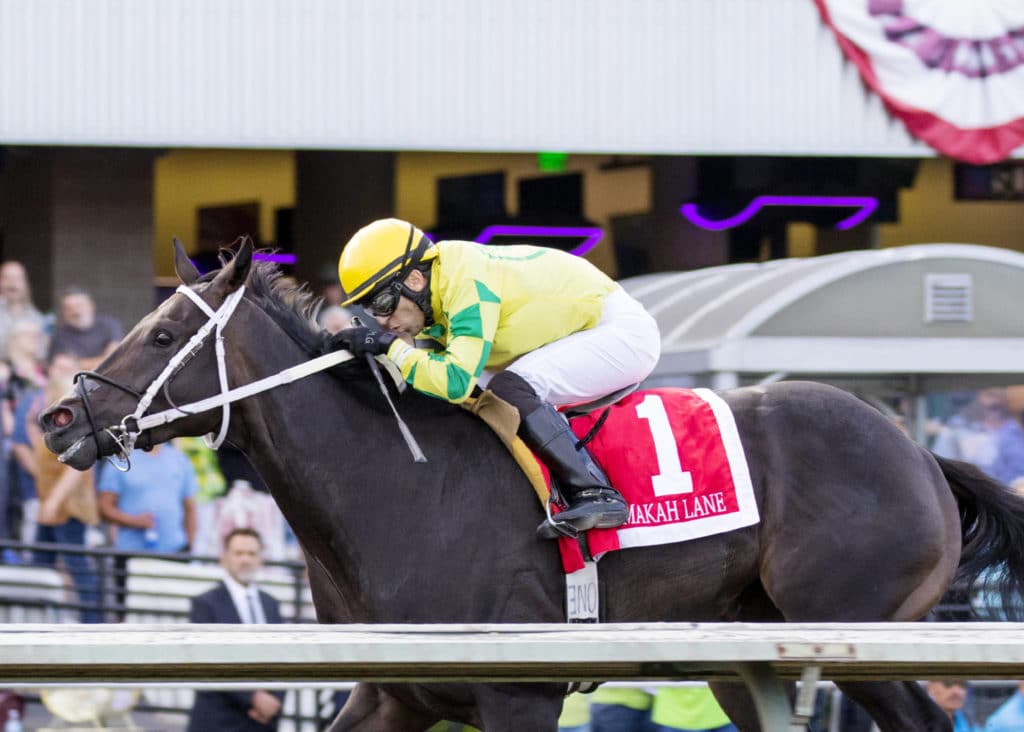 AUBURN, Wash. (September 1, 2019) – Makah Lane put his considerable speed to good use Sunday at Emerald Downs, leading all the way for a 5 ½-length victory over My Grandpa in the $50,000 Washington Cup Sophomore Colt & Gelding presented by Muckleshoot Casino.

Unraced since an eighth in the Seattle Slew Stakes seven weeks ago, Makah Lane was hammered at the windows and a surprising betting favorite over My Grandpa. He didn’t disappoint, dictating the pace through fractions of :23.47, :46.93 and1:10.74, turning back My Grandpa into the stretch and winning with total authority.

My Grandpa, ridden by Jorge Carreno at high weight of 124 lbs, edged Unleash the Tiger by a head for second and paid $2.40 and $2.20. Winner of the Muckleshoot Derby last month, My Grandpa had another awkward break, challenged the winner from the outside into the stretch and gamely held the place.

Unleash the Tiger, ridden by Kevin Krigger at 121 lbs, was a head back in thid and paid $4.60. It was seven lengths back to Time ’n Time Again in fourth place, while El Borracho, Docktarri and Rocket Power completed the order of finish.

For Gutierrez, who rode three winners Sunday, it was his 63rd stakes win at Emerald Downs and record 20th in the Washington Cup. 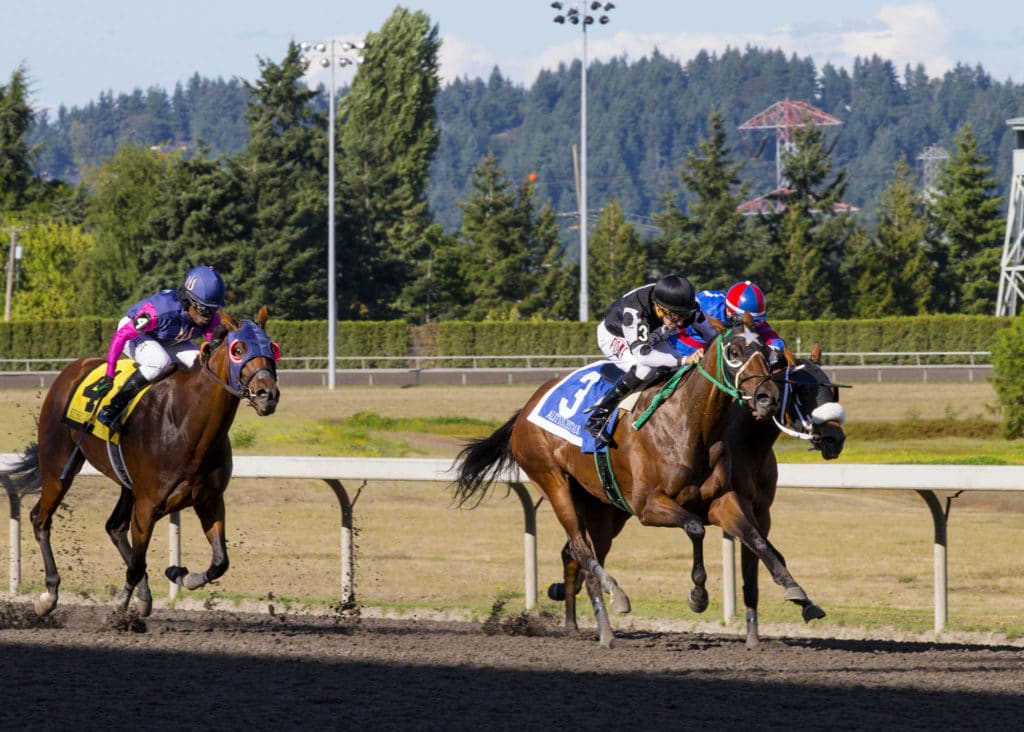 In the $50,000 Washington Cup Sophomore Filly presented by Freight NW, the ultra-consistent Alittlelesstalk asserted her class and edged Magical Spell by a half-length in 1:37.26 for one mile.

The only 3-year-old filly with two stakes wins at the meet, Alittlelesstalk was ridden by Scott Stevens at high-weight of 123 lbs, and paid $2.60, $2.10 and $2.10. Roddina Barrett is the trainer for owners Tim Floyd of Spokane, Kelly Dougan of Mountlake Terrace and Stephanie Loffredo of Las Vegas.

The victory, however, was far from easy, as Magical Spell simply wouldn’t go away. The fillies alternated for command, setting fractions of :23.77, :47.47, 1:11.74 and 1:24.24, racing head and head from start to finish. In the end, though, Alittlelesstalk refused to lose, finally edging away in the final yards.

Magical Spell, ridden by Ryan Barber, paid $4.20 and $2.60. It was quite an effort, considering the daughter of Include had never raced beyond 6 ½ furlongs and was coming off a her maiden victory vs. $25,000 claimers.

Suddenly Awesome, with Kevin Krigger riding at 121 lbs, was three-quarters of a length back in third and paid $2.40 to show. Both the runner-up and third-place finisher are trained by Kay Cooper and bred and co-owned by Rick and Debbie Pabst.

Lulu’s Lightening, Miss Monique and Fortune in Silk completed the order of finish.

The rider of Magical Spell lodged an objection vs. the winner, alleging interference in the stretch, but the stewards disallowed the foul claim.

Stevens, who rides mainly in Arizona, has five wins at the meet including three stakes wins.

NOTES: Trainer Candi Cryderman and owner John Parker combined for two wins Sunday—Kopitar ($4.40) and Cahill Cat ($4.20)—upping Parker to 18 wins in the standings. . .Chad Christensen, who leads with 24 wins, had no starters Sunday. . .Cherokee Louise ($6) won her fourth straight race Sunday, storming from behind to defeat starter allowance foes in race eight. A 4-year-old Nationhood filly, Cherokee Louise races for Dreamscape Farm and trainer Charles Essex. . .The victory on Cherokee Louise was the fourth win Sunday for Gary Wales, and with nine days remaining he owns an 89-58 lead over Kevin Orozco atop the standings. . .Rally Cat ($4.40) wore down Celtic Warrior and prevailed in the $18,200 Joe & Sally Steiner Appreciation Purse for allowance 3-year-olds, running six furlongs in 1:09.22. Trained by Blaine Wright and owned and bred by Fleur De Lis Stables, Rally Cat is 3 for 8 lifetime, and also missed by a neck to stable mate Perfect Dude in the Seattle Slew Stakes. Champagneandcaviar, dam of Rally Cat, won the 2012 Washington Oaks and was the track’s champion 3-year-old filly. . .As part of the Italian Day festivities, owner Dean Mazzuca called Sunday’s second race won by Mika the Mistress ($2.20). . .In winning the $8,000 maiden claimer for fillies and mares 3-year-olds and up, Mika the Mistress equaled the lowest $2 win pay of the meet, accounting for $22,338 of $30,614 in the win pool. . . Hunters Vow ($13.40) edged Johnny Five in race six and gave veteran trainer Sam Dronen his first win of the meet. . .The sixth race was named in honor of long-time trainer George Colello Sr. , who passed away last year at age 78. His son, George Colello Jr., works on the Emerald Downs’ gate crew. . .Former University of Washington Athletic Director Mike Lude, still going strong at age 97, attended Sunday’s races and was interviewed in the paddock by Joe Withee. . .At Canterbury Park, Mr. Jagermeister ($2.80) coasted by 5-¼ lengths in the Minnesota Sprint Championship, running six furlongs in 1:09.87, for his seventh career stakes win. Although bred in Minnesota, Mr. Jagermeister is a 4-year-old colt by Washington sire Atta Boy Roy, who stands at Blue Ribbon Farm in Buckley and also sired Makah Lane. In the post-race interview trainer Valorie Lund said Mr. Jagermeister is headed to the $150,000 Ack Ack, a one mile Grade 3 at Churchill Downs on Saturday, September 28. . .Live racing resumes Friday with first post 6:30 p.m.
–##–