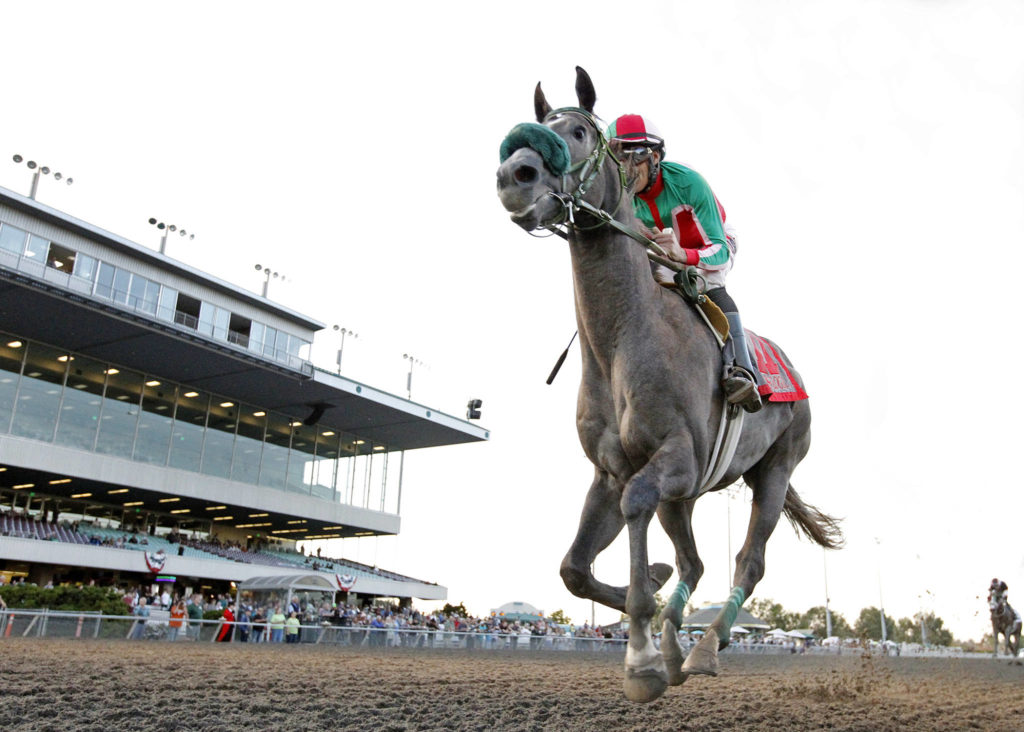 LLOYDS LOGIC ALL THE WAY IN GOTTSTEIN FUTURITY

The moment of truth occurred at the quarter-pole when Chuckanut Bay, the 6 to 5 favorite ridden by Alex Cruz, drew within one length of the leader and appeared to have some momentum into the lane. But Lloyds Logic said no dice, repelling the bid and spurting clear to win easily.

“Tom (Wenzel) said he wanted us to be close, and not be afraid to be on the lead,” Zunino said. “What a great race.”

A gray Kentucky-bred by The Factor that sold for $22,000 as a yearling, Lloyds Logic earned $38,500 and boosted his career total to $60,600. His overall mark is 2-1-1 from five starts including a 5 ¼-length maiden special weight victory in his previous start last month.

The victory capped a four-win day for Wenzel, tying his Emerald Downs’ career-high and put an exclamation point on a fine 2022 meeting for Wenzel and Zunino, who teamed with K D Thoroughbreds Slew’s Tiz Whiz to win the $150,000 Longacres Mile.

“I’ve got to thank my guys at the barn, they don’t get enough credit,” Wenzel said. “The grooms, the gallop boys, all of them do a great job.”

NOTES: Total mutuel handle was $2,260,570 on the 11-race Getaway Day card. . .The complete list of 2022 season award winners and champions will be released Monday at emeralddowns.com. . .Veteran trainer Roy Lumm served as honorary steward for the Gottstein Futurity. . .Wenzel’s previous four-win day was June 24, 2012. . .Kevin Radke rode three winners including stakes triumphs aboard Blazingbellablu and Papa’s Golden Boy. . .Radke led all jockeys with five stakes wins in 2022 while Juan Gutierrez and Jose Zunino rode four stakes winners each. . .Jake Samuels, Eddie Martinez, and Zunino rode two winners each Sunday while Vladimir Jensen won his first race of the season, guiding Beau Rocks to a $36.20 upset in the 11th race finale. . .Blaine Wright led trainers with six stakes wins at the meet, followed by Wenzel with five. . .That’s a wrap for 2022. Have a great winter and see you all in 2023!