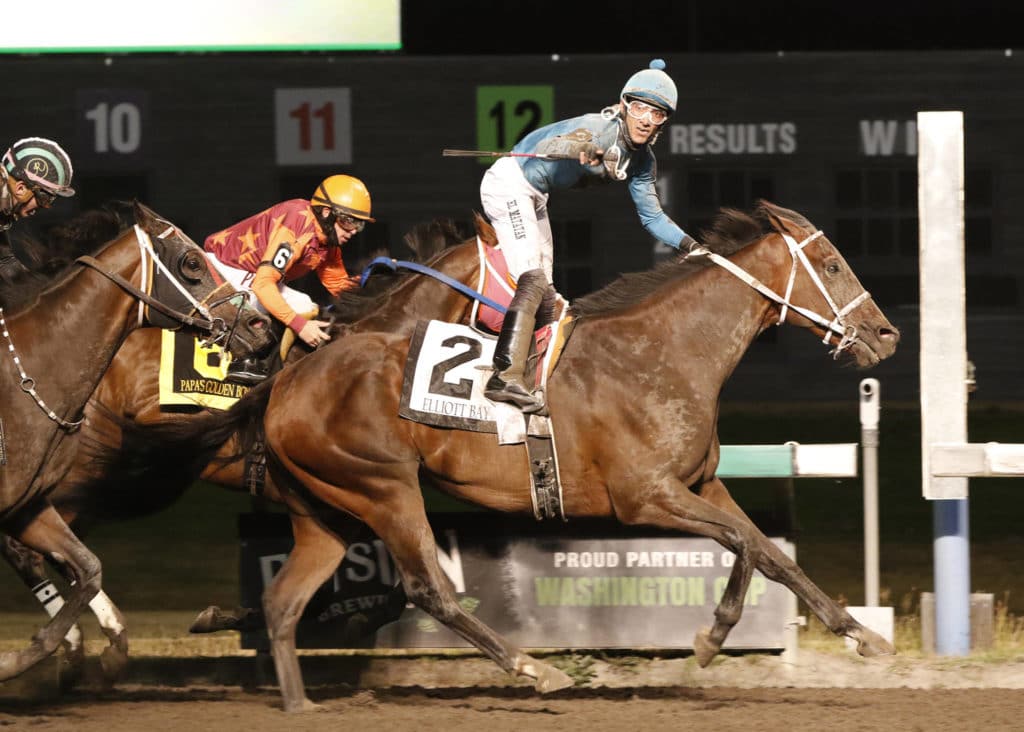 AUBURN, Wash. (August 13, 2020) – Elliott Bay surged late and tagged Papa’s Golden Boy in the final strides for a half-length victory in the $40,000 Mt. Rainier Stakes for 3-year-olds and up at Emerald Downs.

With Eddie Martinez aboard at 121 lbs for trainer Frank Lucarelli and owners Chad Christensen and Josh McKee of Enumclaw, Elliott Bay ran 6½ furlongs in 1:15.35 and paid $11.40 as third choice in the wagering.

The dramatic victory capped a big evening for Martinez and Lucarelli, who also combined forces with 4-year-old filly Killarney Lass for a dominant triumph in the Boeing Stakes for older fillies and mares.

Saving ground throughout, Elliott Bay bided his time before exploding past mid-stretch to collar Papa’s Golden Boy in the shadow of the wire.

Elliott Bay is two for two at the meet and scored his first stakes triumph since the 2017 Gottstein Futurity. A Washington-bred by Harbor the Gold, Elliott Bay is 4-3-4 in 22 starts with earnings of $167,013 including $22,000 for the Mt. Rainier. He was a $50,000 claim by his current connections last year.

Papa’s Golden Boy, ridden by Gary Wales at 120 lbs, opened a commanding lead while setting splits of :21.78, :43.14 and 1:08.16. The 4-year-old gelding was still six lengths clear into the stretch and just failed net his third straight win at the meeting.

Take Charge Deputy was a neck back in third place and was followed by Catfish Hunter, Makah Lane, Rally Cat and Barkley.

Barkley, the 3 to 2 favorite, showed no early speed, raced off the rail through the turn and failed to rally. The 2018 Longacres Mile winner was vanned off the track following the race but appeared to not be in distress. 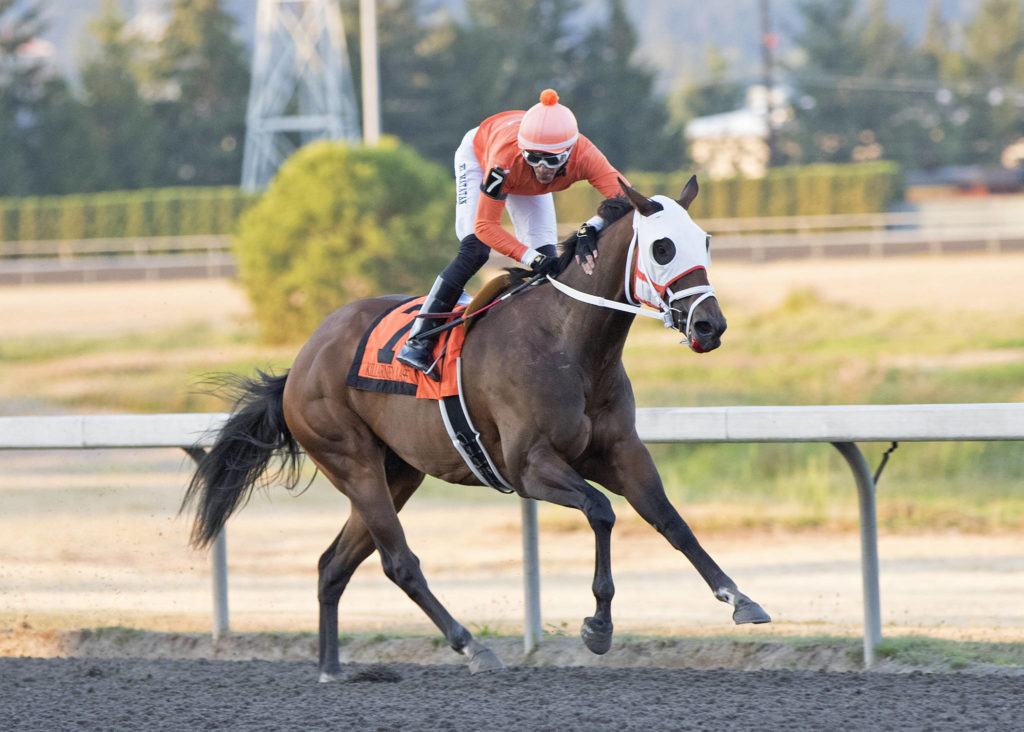 In the $40,000 Boeing Stakes for older fillies and mares, Killarney Lass was never headed while racing to a five-length victory over Alittlelesstalk.

Ridden by Martinez at 121 lbs, Killarney Lass zipped 6½ furlongs in 1:14.74 and paid $10 as third choice in a field of seven. Lucarelli—saddling his 50th career stakes winner at Emerald Downs—is the trainer for owner Dan Sargent of Edgewood.

The winning time is the fastest 6 ½ furlongs of the meeting and three ticks faster than older horses an hour later in the Mt. Rainier Stakes.

Killarney Lass took the lead immediately from the outside post-position and set fractions of :22.64, :44.75 and 1:08.30 while racing to her second career stakes victory. Her four Emerald Downs’ wins are by margins of 14, 18 ¼, 9 ¼ and 5 lengths. She carried her speed nine furlongs while romping in the 2019 Washington Oaks.

Alittlelesstalk, the 9 to 5 betting favorite ridden by Juan Gutierrez at 119 lbs, chased the winner from gate to wire and was clearly second best in the Boeing. The steady 4-year-old Demon Warlock filly is now 5-4-0 in 12 career starts at Emerald Downs.

Dontkissntell, the 2 to 1 second choice with Alex Cruz aboard at 119 lbs, was 5 ½ lengths back in third place, followed by Diamonds R, Magical Spell, Paddy’s Secret and Fortune’s Freude.

A 4-year-old Kentucky-bred by Eskendereya, Killarney Lass earned $22,000 for the victory to boost her life earnings to $128,557. Her overall mark, including two wins on the synthetic surface at Golden Gate and on dirt at Turf Paradise, is 7-0-3 from 18 starts.

NOTES: Martinez and Lucarelli have combined to win three of the first six stakes this season, and Lucarelli is now No. 3 all-time with 51 stakes wins at Emerald Downs. . .Lucarelli had three wins overall and tops the standings with a 21-14 lead on Jorge Rosales. . .Martinez rode three winners on the 11-race card. . .Alex Cruz had two wins and owns a 25-22 lead over  Gary Wales and Juan Gutierrez in the jockeys’ standings. . .Hollywood Heat paid a season $105.60 to win in Thursday’s 10th race, scoring under Gutierrez for owner Vindicate Racing and trainer Jose Raudales. . .The $0.50 Pick 5 paid a mammoth $19,270.95, yet it’s only the third highest Pick 5 here in the last two weeks. . . Spittin Image ($4.80) prevailed over Time ’n Time Again in a maiden special weight for 3-year-olds and up. Co-owned by One Horse Will Do Corporation and trainer Chris Stenslie the 3-year-old full brother to 2016 Horse of the Meeting O B Harbor ran 6 ½ furlongs in 1:16.50. . .Live racing resumes Wednesday with first post 2:15 p.m.
–##–