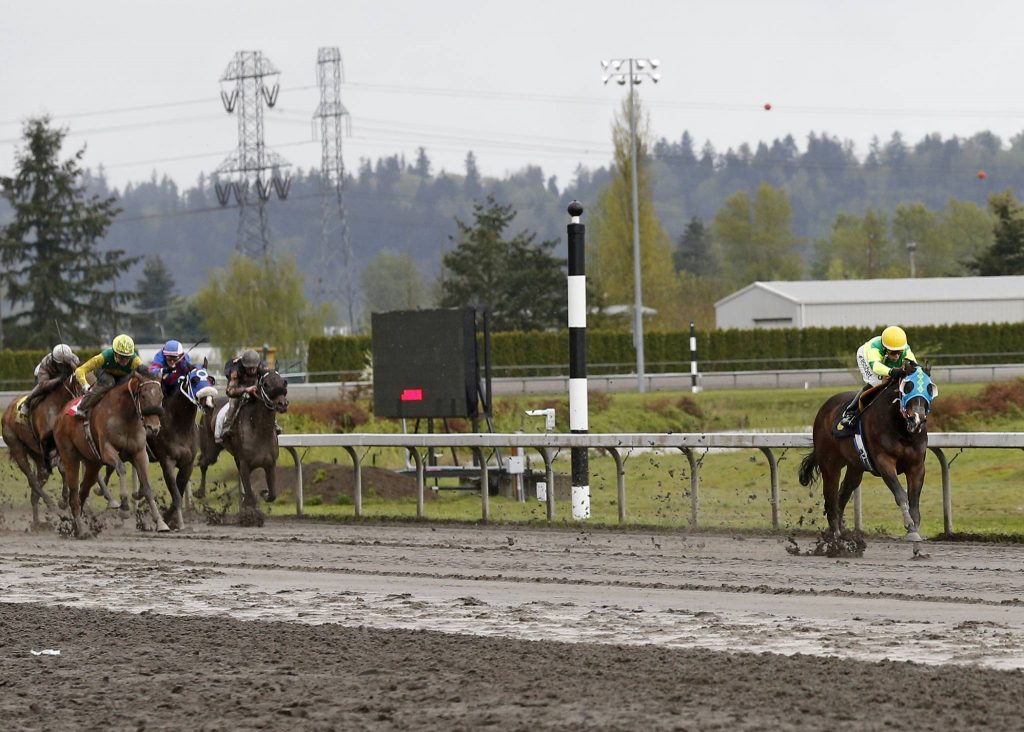 AUBURN, Wash. (April 23, 2017) – Invested Prospect lived up to her billing as the fastest pure sprinter on the grounds Sunday at Emerald Downs.

Rocketing to the lead from the No. 6 post-position, the 4-year-old Abraaj filly remained unbeaten around one-turn with a convincing five-length romp in the $21,500 allowance feature for older fillies and mares.

With regular rider Juan Gutierrez up at 119 lbs, Invested Prospect ran 5 ½ furlongs in 1:02.53 on a wet-fast track and paid $3.80, $2.60 and $2.20. Blaine Wright is the winning trainer for owners John and Janene Maryanski and Gail and Gerald Schneider.

The WTBOA Champion 3-Year-Old Filly of 2016, Invested Prospect is seven-for-seven lifetime in sprints, all gate-to-wire victories including an easy win in last year’s Seattle Stakes. Her overall record is 7-0-0 in eight starts with earnings of $119,975, including $11,825 for Sunday’s triumph.

“I think was one of the more accomplished fields that she beat today,” Wright said, noting the seven-horse field included five Emerald Downs’ stakes winners. “She’s the fastest filly I’ve ever trained.”

Princess Kennedy, the 2016 Washington Oaks winner, rallied from last to finish fourth and was followed by My Heart Goes On, Sweet Tashi and B C Z Middleton.

In a racing oddity, the winner and runner-up are both out of the same broodmare, No Constraints, a double stakes winner at Emerald Downs and 2007 Washington champion 2-year-old filly.

Sunday’s race was designed as a prep race for the $50,000 Hastings Stakes at six furlongs on Saturday, May 20.

NOTES: In the $0.20 Pick 7, which included a carryover of $18,073, tickets with all seven winners paid $5,612. . .The track was listed fast for races 1-4 and wet fast races 5-8. . .Hastings Racecourse opened its 52-day meet Sunday with a pair of 6 ½ furlong stakes. Distinctiv Passion ($4) led all the way for a one-length victory over 31-1 Venetian Mask in the $50,000 Swift Thoroughbreds Inaugural Stakes, with defending champion Modern finishing third. And Dear Lily ($4.90), conditioned by former Emerald Downs’ rider Sandi Gann, notched a one-length victory over Chianti in the $50,000 Brighouse Belles Stakes for older fillies and mares. . .Peter Redekop, owner of Distinctiv Passion, also won a race Sunday at Emerald Downs as Alaskan Cruise ($3.80) scored by five lengths in race three for $15,000 maiden claimers. . .Blaine Wright was two-for three Sunday and tops the trainers’ standings with six wins. Wright is coming off his best season at Emerald Downs in 2016, winning his first training title with 39 wins and clicking at 28.6 percent. . .Rocco Bowen rode two more winners Sunday, already his fourth multiple win day, and leads Eliska Kubinova 12-7 in the jockeys’ standings. . . Hunch play of the day: Relentless Rain ($5.80) rallied inside to take the Sunday opener in a steady drizzle. . .The victory by Relentless Rain gave Charles Essex his 300th victory at Emerald Downs. He’s the 13th trainer to hit the milestone. . .Jose Zunino booted home 1-to-5 favorite Listo ($2.60) in race two and overtook the late Hector Ventura for No. 17 all-time with 292 wins at Emerald Downs. . .Live racing resumes Friday with first post 6:30 p.m. The Clubhouse Casino on the 5th floor is open 10 a.m. to 2 a.m. daily.
–##–