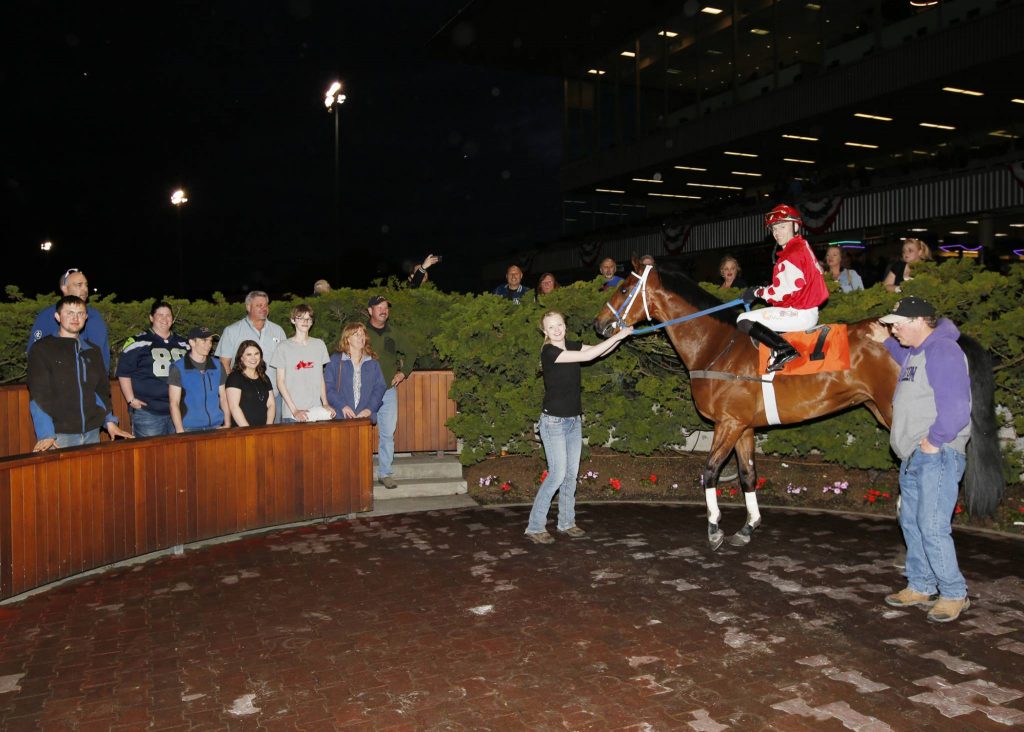 AUBURN, Wash. (May 19, 2017) – Rallying Market remained razor sharp Friday night at Emerald Downs, racing to a long early lead and holding off First Thought for a neck victory in the $11,300 Muckleshoot Casino Purse for 3-year-olds and up.

First Thought, the 3-to-5 betting favorite, rallied steadily through the lane but ran out of ground. Ridden by Javier Matias, the runner-up paid $2.20 and $2.10 and was claimed for $15,000 by Go Hawks Racing and trainer Steve Menne.

Marquee Marini, with Erick Lopez riding, held third and paid $3.20 to show, while Please Be Me and Pakokohe rounded out the order of finish. Lord Lochinvar and Wando Cat were scratched earlier in the day.

NOTES: Gutierrez was the lone jockey with two wins Friday and is five wins away from the 1,300 mark at Emerald Downs. . .The stewards held Rocco Bowen blameless for Sunday’s third race disqualification in which Mr. Branching Out finished first but was placed sixth for interference on the backstretch. . .Lord Walton ($4.60) zipped to a five-length victory under Javier Matias in race four, running five furlongs in :57.10 and was claimed for $7,500 by owner Vann Belvoir and trainer Howard Belvoir. . .Ila View ($3.40) came off the bench for a 1 ½-length victory in race five and also was claimed for $7,500 by owner WWDD Stables and Russell Hulk and trainer David Martinez. . .In fact, five horses were claimed Friday, upping the season total to 55 claims for an aggregate $369,500. That’s up from the same date last year when 47 horses were claimed for $325,500. . .Live racing continues Saturday with the $50,000 Hastings Stakes for older fillies and mares at six furlongs and simulcast wagering on the 142nd Preakness Stakes from Pimlico. First post at Emerald Downs is 2 p.m., and the Preakness goes between the fourth and fifth races at 3:48 p.m. At Churchill Downs, former Emerald Downs’ champion Belle Hill is 15-1 in the $100,000 Matron for fillies and mares at 1 1/16 miles on dirt.
–##–