Emerald Downs’ has had some great rivalries over the years, but the one between Barkley and Mach One Rules is rapidly developing into a clash of titans.

Sunday already marks round three for the combatants, with unbeaten Barkley and his 5-for-5 record facing Mach One Rules in the $50,000 Seattle Slew Stakes for 3-year-olds at 1 1/16 miles.

The flashy sophomores already have delivered a pair of thrillers in 2016 with Barkley edging Mach One Rules by a head in 1:14.21 for 6 ½ furlongs in the Auburn Stakes, and in a virtual replay Barkley prevailed by a neck in 1:35.88 for one mile in the Coca-Cola Stakes.

“He’s worked once a week ever since he raced, and a mile and a sixteenth is an easier race than a mile, anyway,” Belvoir said. “You have a farther run into the turn where your horse can relax a little bit before he has to switch into the lead.

“He got packed four wide the other day (in the Coca-Cola) and it shows me that he should go a route against these types of horses, anyway. Mach One Rules is a nice colt but you don’t see very many horses back up like (Barkley) did at the quarter pole and then come back on.”

The Mach One Rules camp also is pleased with their gelding’s progress.

“He worked really well the other morning and the track was pretty fast,” said assistant trainer Dennis Snowden. “So he’s coming into this race good.

“Well, Barkley and him are pretty much on the same plane and heads separated them two times in a row. Our horse has run two winning races, and that there’s going to have to be a different strategy I guess. They’re just comparable horses, it’s just a matter of who gets there first.”

With the popular Fireworks Spectacular following Sunday’s twilight program, the stands will be packed to the rafters for the Seattle Slew Stakes. Barkley, co-owned by Belvoir and Rising Star Stable III, figures to have his usual large contingent of backers adorned in red attire, while Mach One Rules, owned by Roy Schaefer’s REV Racing, also will have a big rooting section.

Should either of the two favorites falter, Super Hawk, William Crotty and Party for One—fourth, fifth and sixth in the Coca-Cola—will be waiting in the wings.

THE CHILLI MAN OWNER: BIG OFFERS ON THE TABLE

Owner Heidi Nelson has started to weigh her options on whether to keep or sell her sensational 2-year-old The Chilli Man who has been in hot pursuit since he unveiled a mammoth debut last Sunday at Emerald Downs.

“The phone hasn’t stopped ringing with offers since his win last weekend,” said Nelson, who disclosed that some of nation’s top barns have already made inquiries. “With the offers that are currently on the table, it’s hard not to consider selling him to the highest bidder.”

The Chilli Man made waves throughout the national racing scene Sunday after the chestnut gelding’s 11-½-length victory in a maiden special weight at Emerald Downs. Trained by Monique Snowden, The Chilli Man sped the 4 ½-furlong sprint in :50.22—the third fastest time by a 2-year-old in track history—despite not being asked to uncork his final gear. The victory earned an 81 Beyer Speed Figure, good enough for fourth highest among all 2-year-olds in the country this year.

FAVORITES WINLESS IN STAKES IN 2016

Betting favorites are 0-for-9 in stakes this season at Emerald Downs including Mach One Rules in the Auburn Stakes and Coca-Cola Stakes. Although second betting choices are a robust 6-for-9, including Barkley’s wins in the Auburn and Coca-Cola, long shots prevailed in the last two stakes: B C Z Middleton scoring at 32.60 in the Washington State Legislators Stakes for fillies and mares and Find Joy rallying for a $31.40 surprise in the Kent Stakes for 3-year-old fillies.

The 45-minute program will showcase every stakes race this season including Sunday’s $50,000Seattle Slew Stakes and interviews with trainer Howard Belvoir and assistant trainer Dennis Snowden who saddle Barkley and Mach One Rules,
respectively. 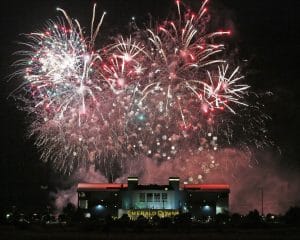 Promised to be the best show yet, the Fireworks Spectacular, presented by Carl’s Jr., makes its much-anticipated return to Emerald Downs on Sunday, July 3.

The gates open for the track’s banner event at9:45 a.m. for friends and families who wish to claim prime vantage points for the evening show. The day’s festivities includes three horse racing-themed family moves shown on the track’s big screen in the infield.

The day also includes 10 races of live Thoroughbred action led by Barkley who puts his undefeated record on the line in the $50,000 Seattle Slew Stakes.

After the 10th and final race, fledgling country star Rae Solomon will perform in the North Park, and the fireworks show starting shortly after 10 p.m.

Undefeated colt Barkley made an appearance on the racetrack for a Thursday morning gallop in preparation for Sunday’s $50,000 Seattle Slew Stakes and is the star of this week’s “Training Day.”

Xerxes goes for a fourth straight win and fifth overall at the meet in Saturday’s feature for older claimers at 6 ½ furlongs. Xerxes currently is tied with Italian Warrior for most wins at the meet with four apiece. Eight horses gave three wins each: He’s Cagey, Seattles Best Copy, Pecos Breeze, Inexcess Again, Copy Begone, O B Harbor, Barkley and Parkers Delight. . .Beginning Friday, the 123Racing wager will be a $1 minimum. The same scoring format remains in place. . .Citizen Geller, named after our former track announcer, is developing into a fine runner for UKUSA Stables and trainer Vance Mikkelson. A 4-year-old New Mexico-bred gelding by Pro Prado, Citizen Geller set a track record of 1:20.81 for seven furlongs while scoring a 20-1 upset in Saturday’s $60,000 OB McDonald Stakes at Albuquerque. . .Trainer Jim Penney celebrates his 82nd birthday Monday. . .Dedicated to You, fifth to O B Harbor in the Budweiser Stakes, worked five furlongs in 1:00.80 Thursday for trainer David Martinez. . . .For those into Mules, two of the all-time greats—13-year-old Bar JF Hot Ticket (85-53-18-8-$258,207) and 11-year-old Bar JF Red Ticket (75-42-23-4-$154,282)—meet in Saturday’s first race at Pleasanton.