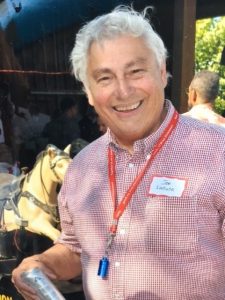 AUBURN, Wash. (February 20, 2017) – It may be hard to believe, but former Washington Thoroughbred editor Joe LaDuca will be inducted into the Canisius College basketball hall of fame this Sunday, 54 years after he played there.

LaDuca, who works as a customer service representative at Emerald Downs, will be honored along with the rest of the 1963 Canisius club Sunday in Buffalo, N.Y.

“We had one of the best teams in the country,” LaDuca said. “We lost in the finals of the NIT to Providence and MVP John Thompson. Former Seattle University basketball coach and Helms Foundation All American Bill O’Connor was the star of that team.”

LaDuca liked hoops more than schoolwork and dropped out of school, only to be eventually drafted by the Army during the Vietnam era.

Upon returning to civilian life, he eventually played for Central Washington University, captaining the team to the national NAIA finals in 1970, losing to Kentucky State led by eventual NBA stars Elmore Smith and Travis Grant. Smith was 7-feet tall and Grant was called the best shooter ever by NBA Hall-of-Famer George Gervin. Central Washington led the nation that year with 31 wins and only two losses. 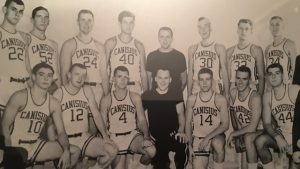 Longacres publicity director Blaine Johnson met LaDuca at that tourney and then hired him as news coordinator at the Renton track. Four years later he became the editor of Washington Thoroughbred and later the Oregon Horse. After an active 30 years in the Thoroughbred industry LaDuca stepped away only to return, this time settling at the newcomers center at Emerald Downs where he can be found teaching neophytes the ins and outs of handicapping.

“I loved basketball and I love the Thoroughbred industry,” LaDuca said. “Buffalo will be fun Sunday, but I can’t wait until live racing starts at Emerald Downs in a couple of months”