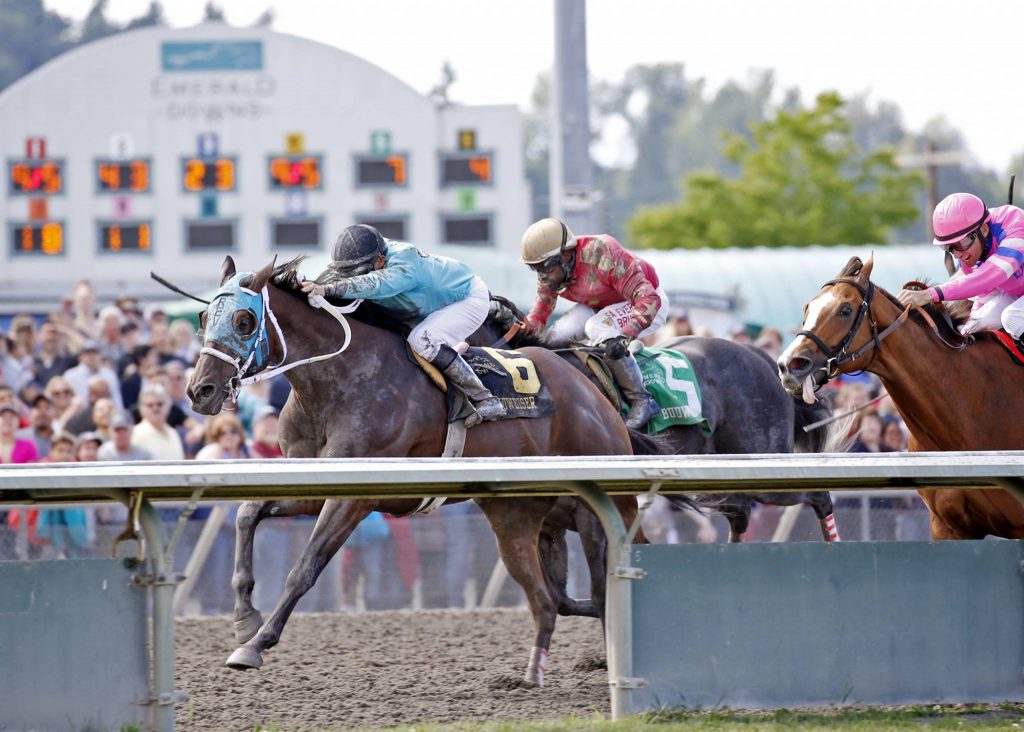 MACH ONE RULES IN THE BUDWEISER STAKES

AUBURN, Wash. (June 18, 2017) – Mach One Rules collared a loose on the lead Prime Engine late and scored a three-quarter-length victory Sunday in the $50,000 Budweiser Stakes for 3-year-olds and up at Emerald Downs.

Prime Engine, ridden by Scott Stevens at 120 lbs, finished second and paid $3.60 and $2.60, while Togrammashousewego, Rocco Bowen riding at 118 lbs, rallied strongly for third and paid $3.80.

Barkley, a slight betting favorite over Prime Engine, encountered traffic trouble in the stretch and finished a close fourth, only his third loss in 10 career starts.

Howard Belvoir, trainer of Barkley, lodged an objection against the winner alleging interference in the stretch, but the stewards made no change in the order of finish.

Afterward, Lucarelli and the Schaefers breathed a huge sigh of relief after finally turning the tables on Barkley, who had hung four photo finish defeats on their gelding the last two seasons.

“I may be dumb, but I keep saying (Mach One Rules) is as good as Barkley,” Lucarelli said.

For a while it appeared neither Mach One Rules nor Barkley would be victorious, as Prime Engine shook off The Press into the lane, running a half-mile in :44.06 and kicking 2 ½ lengths clear of the field. Winner of the 2014 Gottstein Futurity and 2015 Emerald Downs Derby, Prime Engine was still clear inside the sixteenth pole, but Mach One Rules responded to Enriquez and swept by for the victory.

In fourth place early, Mach One Rules rallied into contention into the lane, drifted out past mid-stretch and causing Barkley and jockey Javier Matias to alter course, and then reeled in Prime Engine in the final yards.

“We changed his (running) style a little bit today and he gave me a big finish,” Enriquez said. “I think we could have won the (Governor’s) if I’d known him a little better.”

A 4-year-old Washington-bred gelding by Harbor the Gold-Felice the Cat, Mach One Rules is 5-5-2 in 14 lifetime starts with earnings of $181,856. He has four stakes wins including three in 2015 when he was track and state champion 2-year-old.

Barkley, now 7-2-0 in 10 starts, lacked racing room through most of the stretch and was beaten only two lengths for it all.

Stryker Phd, Its Allabout Jerry, The Press and Dedicated to You rounded out the eight-horse field.

Sprinting for the first time in over four years, Stryker Phd was only beaten three lengths in an encouraging comeback effort. The 8-year-old gelding earned $1,250 to push his lifetime total to $631,011, good for No. 3 all-time among Washington-breds.