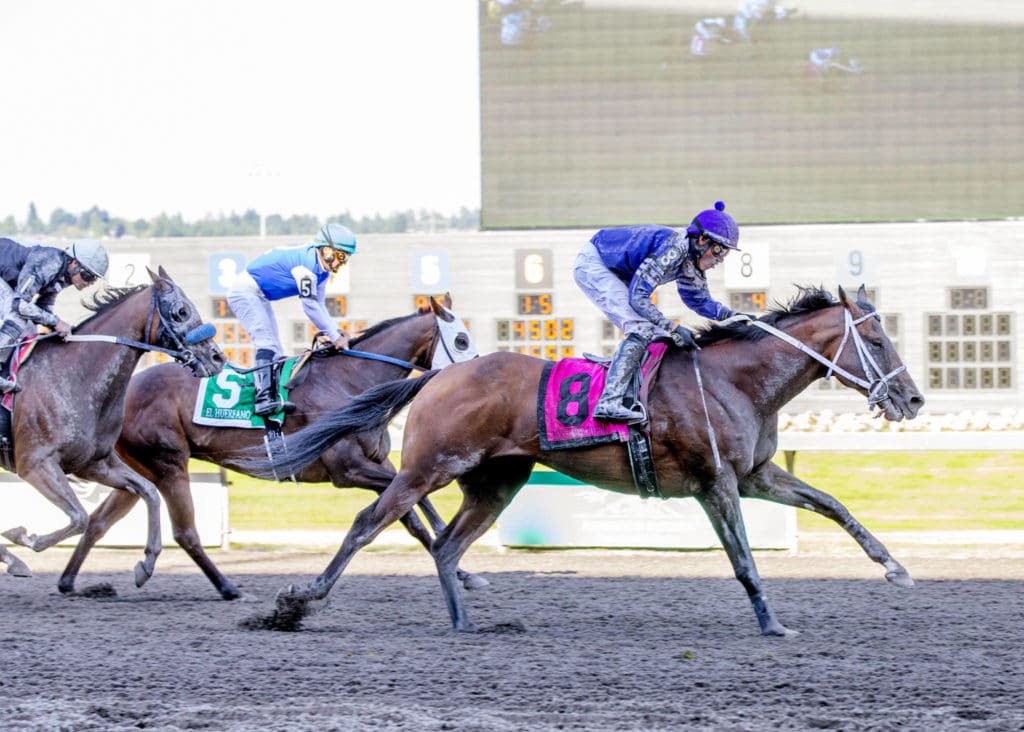 More Power to Him and Kevin Orozco

AUBURN, Wash. (July 21, 2019) – After riding two stakes winners last Sunday, Kevin Orozco repeated the feat on Championship Sunday Preview Day, capped with a perfectly timed ride on More Power to Him in the $50,000 Mt. Rainier Stakes for 3-year-olds and up.

Orozco, 22, scored his other stakes win Sunday aboard Show Me the Mints in the $50,000 King County Express as Emerald Downs presented four $50,000 stakes races on a 10-race card.

El Huerfano, the 9-to-5 favorite ridden by Agapito Delgadillo at 124 lbs, finished second and paid $3.40 and $2.40, while ultra-consistent Oh Marvelous Me, ridden by Jorge Carreno at 120 lbs, finished third and paid $2.60. Elliott Bay, Hit the Beach, Concur, Vicente’s Shadow and Many Roses completed the order of finish; Respect the Hustle was scratched.

The Mt. Rainier is the final local prep for next month’s $200,000 Longacres Mile (G3), and Mason said More Power to would remain here for the 84th renewal of the Northwest’s most prestigious race on Sunday, August 11.

More Power to Him is no stranger to Emerald Downs. He finished third twice in stakes races here as a 3-year-old in 2017, but has mainly competed on the synthetic and turf surfaces at Golden Gate Fields. A California-bred by Slew’s Tiznow, his overall mark is 6-6-7 from 34 starts with earnings of $323,317, including $25,850 for Sunday’s triumph.

Although he settled for second, El Huerfano ran a much-improved race in the Mt. Rainier and also figures to contend in the Longacres Mile. Ditto third-place finisher Oh Marvelous Me, who now has two seconds and a third in three stakes this season and an overall record of 6-5-6 in 18 career starts at Emerald Downs.

Anyportinastorm, who sat out the Mt. Rainier after scoring convincing wins in the Governor’s Stakes and Budweiser Stakes, also is expected to run in the Longacres Mile. 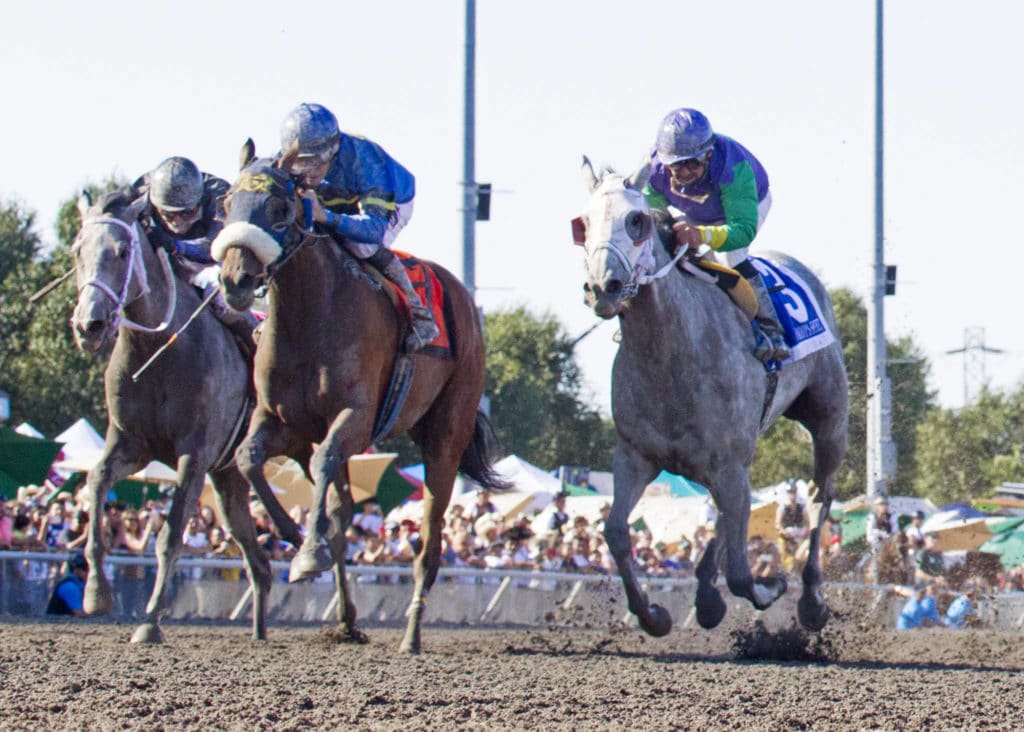 No Talking Back (center) and Scott Stevens

NO TALKING BACK PREVAILS IN BOEING STAKES

Scott Stevens—scoring his first Emerald Downs’ stakes victory—rode the winner at 117 lbs for trainer Chris Stenslie and owners Jody Peetz of Issaquah and Steve Shimizu of Bellevue. It’s the first win in four starts this year for No Talking Back, who won three races and nearly $60,000 here in 2018. including the Fan Appreciation Day Stakes.

Saving ground on the last turn, No Talking Back angled out in mid-stretch and collared Paddy’s Secret in the final strides. A 5-year-old Peetz homebred by Flatter-Talk to My Lawyer, No Talking Back earned $25,300 to boost her career earnings to $118,254.

Paddy’s Secret gained command into the stretch and just failed to last for the victory. Ridden by Agapito Delgadillo at 118 lbs, the runner-up paid $8.40 and $4.80. Blazinbeauty, with Javier Matias riding at 119 lbs, closed from last to finish third and paid $4.20 to show.

Bella Mia, the 3 to 2 betting favorite, set the pace to mid-stretch and gave way late to finish fourth, while Reginella, Guardian One, Fly Far Away, Little Dancer and Dontkissntell completed the order of finish. 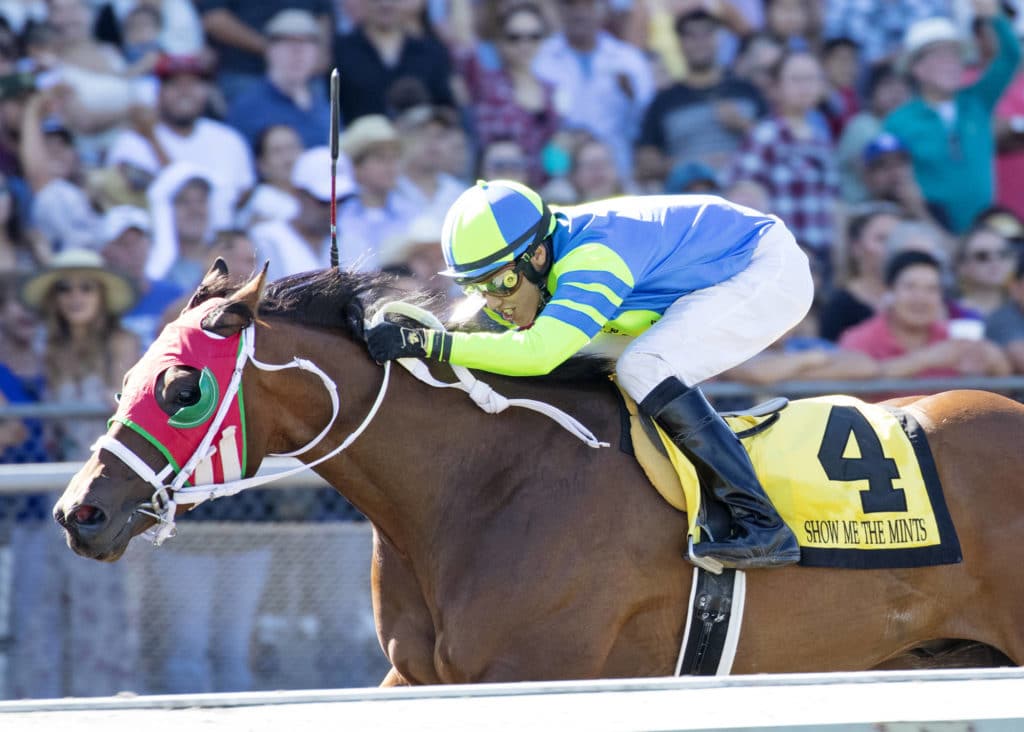 Show Me the Mints and Kevin Orozco

SHOW ME THE MINTS SHARP IN KING COUNTY EXPRESS

Show Me the Mints used his blazing speed for a runaway four-length victory in the $50,000 King County Express for 2-year-old colts and geldings.

Breaking sharply from the No. 4 post, Show Me the Mints shook off Reddy to Star after a half-mile in :46.82 and powered home for the victory.

Haveulostyourmind rallied from far back and caught Brett in the final jump for second place and paid $6 and $3.60, while Brett finished third and paid $3.40 to show. Harbors Rule, Coleinator, Northland Cable, Reddy to Star and Race Office completed the order of finish.

The $50,000 WTBOA Lads Stakes at six furlongs in next for 2-year-old colts and geldings on Sunday, August 18. 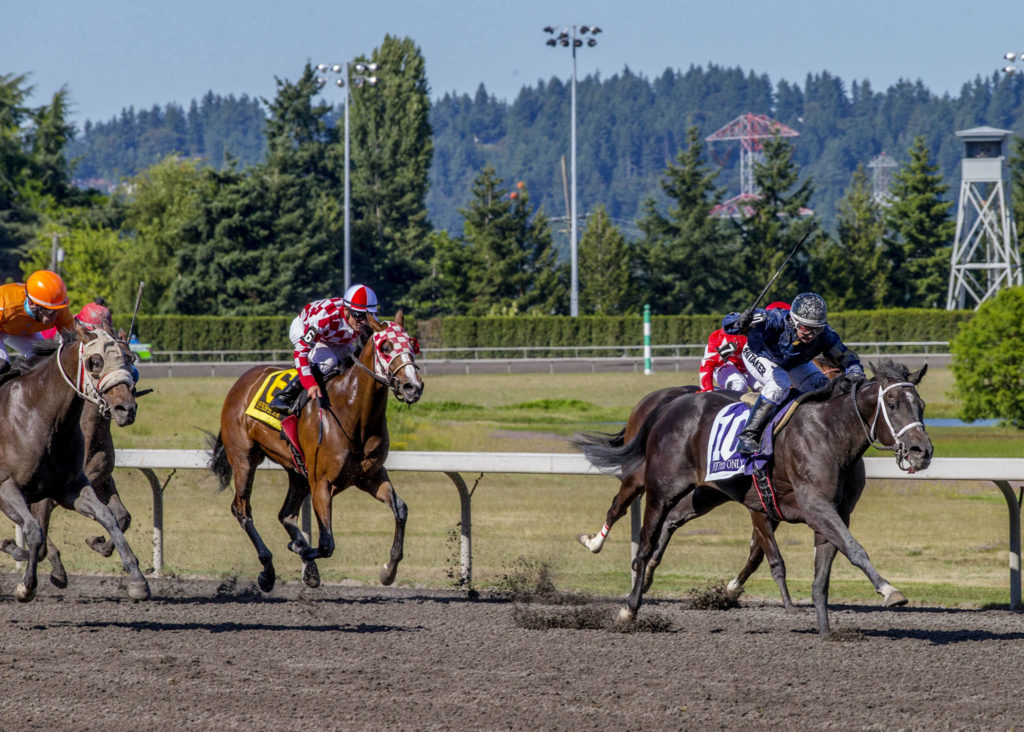 For You Only and Jennifer Whitaker

FOR YOU ONLY SCORES UPSET IN ANGIE C

Ridden by Jennifer Whitaker at 117 lbs, For You Only returned $25.60, $11 and $6 as sixth choice in the wagering. Howard Belvoir is the trainer for co-owners Ray Loftis of Bellevue, Dixie Hitchcock of Bonney Lake and David Matsumoto of Olympia.

In her career debut two weeks ago, For You Only showed speed and tired late while finishing third in a five-furlong maiden special weight. Sunday she reversed tactics and came from off the pace, surging past Miss Prospector and Devilish Diva late for the victory.

A Washington-bred by Abraaj-Slew Tunes, For You Only earned $21,725 and is 1-0-1 in two starts with earnings of $24,555. Nina Hagen, who also bred King County Express winner Show Me the Mints, bred For You Only at El Dorado Farm in Enumclaw.

Windy Point, the 9 -to-5 choice ridden by Juan Gutierrez, finished second and paid $3.80 and $3.
The rider of Windy Point claimed foul against the winner, but the stewards’ made no change in the order of finish.

Devilish Diva, the early leader ridden by Scott Stevens at 119 lbs, held third and paid $3.60, while Jaded Tiger, You Go Girl, Miss Prospector, Lovefliesonwings, Sigrid’s Gold, Abraa Jabraa and Back to Mischief completed the order of finish. Informed Lady fell in mid-stretch and did not finish.

Next for 2-year-old fillies is the $50,000 Barbara Shinpoch Stakes at six furlongs on Sunday, August 18.

NOTES: The $0.50 All Stakes Pick 4 paid $961.70. . .Nominations for the Longacres Mile close Sunday, July 28. . .Gary Wales consecutive winning days streak ended at 28 Sunday—two days shy of tying Kevin Radke’s mark set in 2003. . .Wales still owns a 61-44 lead over Kevin Orozco in the riders’ standings. . .Orozco rode three winners Sunday and leads all jockeys with four stakes wins at the meet. . .Jennifer Whitaker and Javier Matias rode two winners apiece Sunday. . .Jockey Eddie Martinez walked off the track without assistance after going down in the stretch run while aboard Informed Lady in the Angie C Stakes. . .In addition to breeding both 2-year-old stakes winners Sunday, Ron and Nina Hagen co-bred ninth race winner Irish Swing ($5.60). . .Frank Lucarelli saddled two winners Sunday—his fifth and sixth of the week—and leads Blaine Wright 42-28 in the trainers’ race. . .Wright and Howard Belvoir also had two winners each Sunday. . . Lucarelli is tied with the late Bud Klokstad for No. 3 all-time with 46 stakes wins at Emerald Downs, while Belvoir is No. 5 with 45. . .Whitaker’s stakes win Sunday is her 20th at Emerald Downs, good for 10th place all-time. . .Slew’s Tiznow, sire of More Power to Him, also sired He’s Not Grey, the lone four-time winner at the 2019 meet. . .Live racing resumes Friday with first post 6:30 p.m.