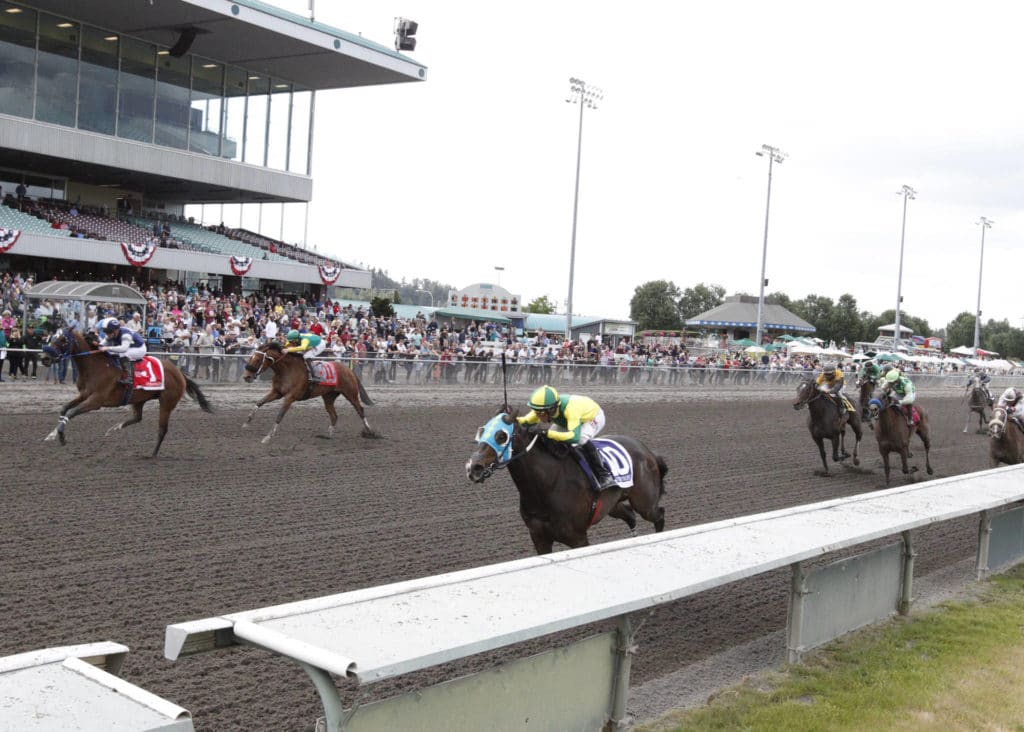 Invested Prospect (No. 10) holds off Mother of Dragons

AUBURN, Wash. (May 28, 2018) – Invested Prospect rationed her brilliant speed to perfection Monday at Emerald Downs, opening a long early lead and holding off odds-on favorite Mother of Dragons for a three-quarter-length victory in the $50,000 Hastings Stakes for older fillies and mares.

With Kevin Orozco riding at 117 lbs, Invested Prospect covered six furlongs in 1:08.69 and paid $19.20, $6.20 and $4.40. Blaine Wright is the winning trainer for owners John and Janene Maryanski and Gail and Gerald Schneider.

The victory gave Orozco a sweep of the weekend’s stakes races. A native of Glendale, Calif., Orozco rode Whatwasithinking to a nose victory over Vicente’s Shadow in Saturday’s Auburn Stakes for 3-year-old colts and geldings. Unlike Saturday, however, when Orozco had to overcome heavy traffic for the victory, the plan aboard Invested Prospect was simple—let her rip early and hold off the closers late.

Breaking from the No. 10 post-position, Invested Prospect gained control early,  opening a four-length lead while setting fractions of :21.62 and :44.11.

“I looked back at the quarter-pole,” Orozco said, “and I thought we had a good shot to win the race.”

Invested Prospect was three lengths clear past mid-stretch, running five furlongs in :56.15, and had just enough gas to hold off California shipper Mother of Dragons.

Mother of Dragons, the 3-5 favorite ridden by Julien Couton at high weight of 123 lbs, drifted out through the lane while trying to reel in Invested Prospect and paid $2.80 and $2.20.

Citizen Kitty, the defending Hastings champion and older sister of Invested Prospect, raced six-wide through the turn and finished well to gain third place, 2 ½ lengths back of the winner. Ridden by Jose Zunino at 119 lbs, Citizen Kitty paid $2.80.

Strip It Down, also trained by Wright, finished fourth and was followed by Gazing, My Heart Goes On, Little Dancer, Risque’s Legacy, Blazinbeauty, Eurodevilwoman and Arabesque.

Next for older fillies and mares is the $50,000 Washington State Legislators Stakes at 6 ½ furlongs on Saturday, June 16.

NOTES:  Wright is now tied with Sharon Ross for 10th place all-time with 23 stakes wins at Emerald Downs. . .Invested Prospect has three stakes wins, all at Emerald Downs: 2015 Northwest Farms, 2016 Seattle Stakes and 2018 Hastings Stakes. She was Washington’s champion 3-year-old filly of 2016. . .Rojo Bou Peep ($8.60) became the meet’s first triple winner with a rail rally in the fifth race, running six furlongs in 1:09.81 with Rocco Bowen aboard for owner/trainer Jennifer Nunnally. A 4-year-old He’s Tops gelding, Rojo Bou Peep has wins on April 22, May 5 and May 28. . .Hall of Fame jockey Alex Solis was on hand Monday to watch his son, Austin Solis, ride at Emerald Downs. . .Ididaride Solo ($12) is back on the beam for trainer Chris Stenslie and owners One Horse Will Do Corp., Griffin Place, and Scott and Tina Saxwold, leading gate-to-wire in the $18,500 Old Friends Purse for 3-year-olds and up. A 5-year-old by Flatter, Ididaride Solo ran six furlongs in 1:08.27 with Leonel Camacho-Flores aboard. . .Memorial Day hunch play: Ridgefield Rocket ($15.20)—owned by Semper Fi Racing—prevailed gate-to-wire under Francisco Orduna-Rojas in Monday’s third race, and also gave trainer Wayne McDonnell his first victory at Emerald Downs. A former trainer at Longacres, McDonnell worked several years as jockey agent for the late Ron Hansen. . .Five payoffs reached double digits topped by $48 winner Our Last Star in the eighth race finale for jockey Anne Sanguinetti and trainer Robert Hazel. Sanguinetti already has wins this season at 32-1, 29-1 and 23-1. . .Bowen rode two more winners and has 30 wins in the first 15 days of racing. Bowen has wins on all 15 cards and is four wins shy of 500 at Emerald Downs. . .Jeff Metz leads the trainers’ standings with 15 wins including a 4 ¾-length score by Fernet Me Not ($4) in race four. . .Barkley and Mach One Rules both worked Monday in advance of Sunday’s $50,000 Governor’s Stakes for 3-year-olds and up. Barkley, who edged Mach One Rules by a neck in last year’s Governor’s, worked a half-mile in :46 1/5 (handily) and Mach One Rules went a half in :46 3/5 (breezing). . .Racing resumes Friday with first post 6:30 p.m., including a $13,146 carryover in the $0.20 Jackpot Pick 7.