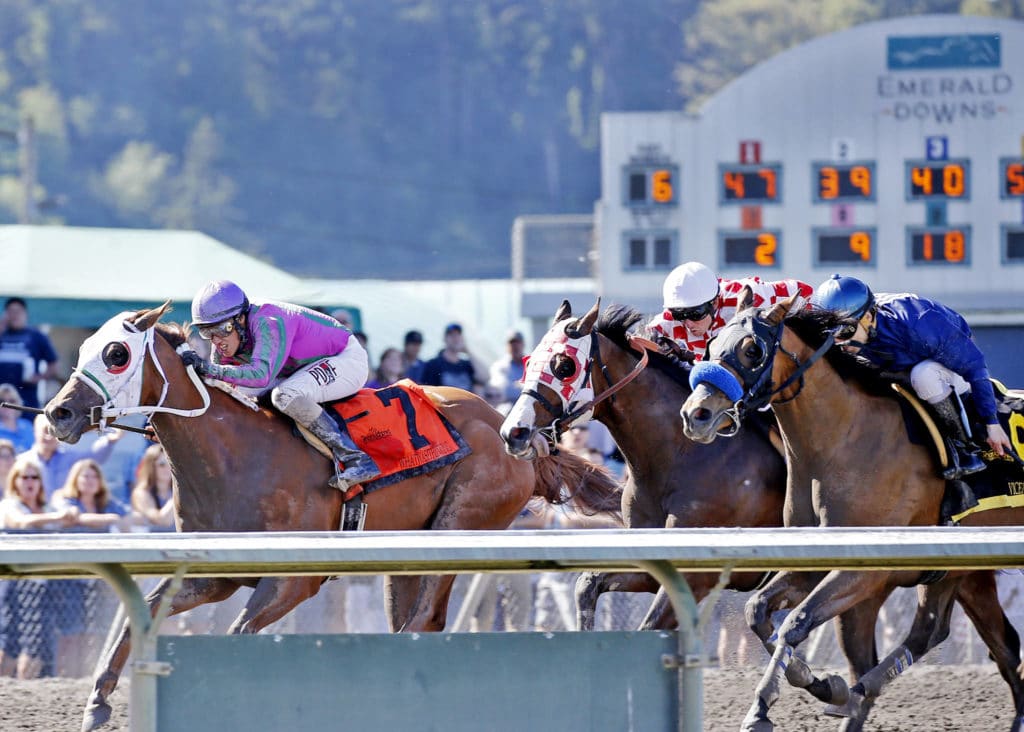 Whatwasithinking (No. 7) edges Vicente’s Shadow (No. 6)

AUBURN, Wash. (May 27, 2018) – Whatwasithinking nailed long shot Vicente’s Shadow in the final strides for a nose victory Sunday in the $50,000 Auburn Stakes for 3-year-old colts and geldings at Emerald Downs.

Ridden by Kevin Orozco at 119 lbs, Whatwasithinking ran six furlongs in 1:09.63 and paid $6.40, $3.80 and $3 as the betting favorite. Frank Lucarelli, who made history Sunday at Emerald Downs, is the winning trainer and co-owner with Chris Randall of Bellevue and Nick Rossi of Las Vegas.

With Whatwasithinking earning $25,858 for the victory, Lucarelli became the first trainer in track history to surpass $10,000,000 in purse earnings. A 61-year-old Enumclaw resident, Lucarelli has finished first or second in wins 16 of the last 18 seasons at Emerald Downs, and ranks No. 2 all-time with 914 wins and No. 4 in stakes wins with 44.

Whatwasithinking is now unbeaten in four sprints, and the Auburn marked his first stakes triumph. A Kentucky-bred by Violence-Shot Gun Pennie, Whatwasithinking is 4-0-0 in five starts overall with earnings of $67,416. His lone miss was fifth in the 1 1/16-mile Turf Paradise Derby in Phoenix.

Whatwasithinking raced in heavy traffic into the turn and as Orozco surveyed the scene from seventh place said his horse needed to find a seam. They finally found room into the lane, rallying between Sippin Fire and Boundary Bay, and were up in the final strides for the victory.

“(Whatwasithinking’s) a pretty good horse, but there’s a lot of good 3-year-olds here this year,” Lucarelli said. “A lot of them were making their first start of the year. It’s going to be a good division.”

Vicente’s Shadow, ridden by Erick Lopez at 118 lbs, nearly pulled off a 28-1 upset, gaining the lead past mid-stretch, but was caught in the final yards by Whatwasithinking. It was a sharp effort by the Liaison gelding, whose previous start was a sixth in the Emerald Express last July.

Freiburg, who dueled with Winter Knight through fractions of :21.76 and :44.78, finished fourth and was followed by 5-2 second choice Sippin Fire, Elliott Bay, My Heart Awakens, Hey Sequoia, Oldtoytrain, Choreography and Winter Knight.

NOTES: Auburn mayor Nancy Backus served as Honorary Steward of the Auburn Stakes.. . .Lucarelli also won the Auburn with Fear No Evil in 2008 and Posse Power in 2010. . .The late Jim Penney is No. 2 in all-time earnings with $8,851,933. . .Serbian Syclone ($2.60) ran six furlongs a meet-fastest 1:08.25 while winning Sunday’s eighth race, a $10,000 claimer for 3-year-olds and up. A 6-year-old Wildcat Heir gelding, Serbian Syclone gave trainer Manny Ortiz his second win of the day. . .Kevin Orozco was the riding star Sunday with three wins including his 5th career Emerald Downs’ stakes triumph. . .The Emerald Racing Club notched its first victory of the season as Zanab ($10.20) rallied from last under Orozco to win the fifth race, a $3,500 starter allowance for older fillies and mares. . .With the win aboard Serbian Syclone, Rocco Bowen has at least one win on all 14 cards this season, and leads Orozco 28-16 in the riders’ standings. . . Racing continues Monday with the $50,000 Hastings Stakes for older fillies and mares at six furlongs. First post is 2 p.m. and action includes an $11,255 carryover in the $0.20 Jackpot Pick 7.