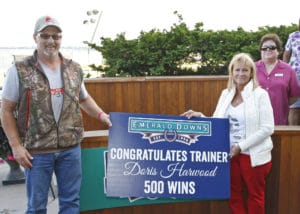 Mustard Plaster, who defeated Kelso in the 1964 Californian Stakes and retired in 1967 as the leading earner in Washington history, is the 2018 Hall of Fame Horse. And the Penney Family, a racing dynasty spanning three generations and producing seven state champions, will be honored as 2018 Breeder.

In addition, Dr. George Todaro of Seattle will become only the 10th recipient of the Washington Hall of Fame Lifetime Achievement Award. A world renowned medical doctor and research scientist, Dr. Todaro also is one of the most successful Thoroughbred owners in West Coast history, and also an original Emerald Downs’ investor.

A 16-member voting committee composed of media, HBPA, WTBOA and Emerald Downs’ representatives decided the winners from a list of four Finalists in each category.