VICTOR “THE PREDICTOR” COZZETTI  PASSES AWAY

AUBURN, Wash. (Oct. 31) – Vic Cozzetti, a staple in Washington racing for over five decades, passed away Sunday in a Puyallup assisted living facility at age 93.

Cozzetti was a fixture in the press box at Longacres and Emerald Downs—where he was known as “Victor the Predictor”—and involved in every form of racing media—television, radio, newspaper, Internet. His nightly recap on local radio was especially popular with handicappers and horsemen alike, delivering results and racing news in the pre-Internet era of the 1970s and 80s.

Cozzetti was more than just a handicapper and voice for racing, however, founding one of the first ownership syndicates in America, bringing together virtual strangers via 10 percent shares to own and race Thoroughbreds. Beginning with Media Stables in the 1970s and followed by SKS Stables and Vic-Tory Stables, his syndicates’ navy-blue silks were fixtures at Washington racetracks. His final horse, He’s All Heart, won the 2011 Muckleshoot Tribal Classic by 10¼ lengths. 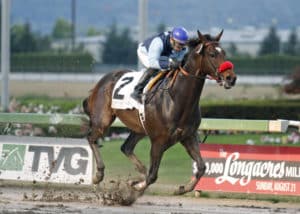 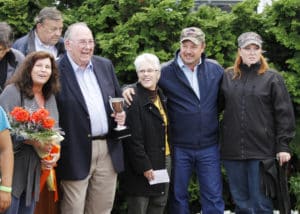 Cozzetti took great pride in handicapping, offering selections in the Valley Daily News, along with pre-race seminars and a weekly newsletter. He also sold equine insurance, tabulated program standings, assisted in the TV department, and maintained a racing website Predictorsays.com.

“Victor’s accomplishments and contributions to Washington racing will never be matched,” said Emerald Downs President Phil Ziegler. “He took on so many challenges throughout his career. The people at Longacres and Emerald Downs were part of his family, and he was part of ours.”

Born in Niagara Falls, NY, Cozzetti grew up in Spokane, starring in baseball at Gonzaga Prep High School and later playing semi-pro ball in Montana. He eventually settled in in Tacoma, where he worked in insurance and umpired baseball and officiated football and basketball.

Cozzetti is survived by a son, Michael of Yelm, Wash., a daughter Deborah of Lakeland, Fla., and a stepson, Jeff of San Diego, Calif.