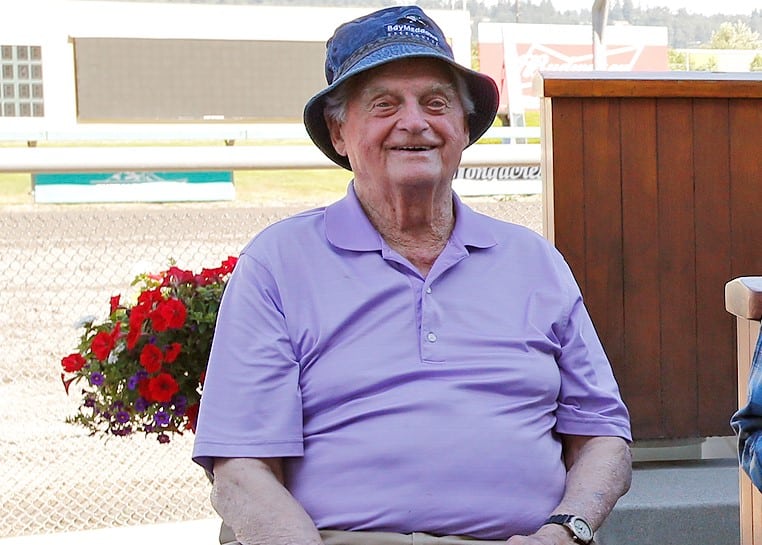 AUBURN, Wash. (Dec. 31) – Bob Meeking, a trainer for over seven decades and one of the state’s most popular and respected horsemen, passed away last week at age 94.

Meeking, who owned the 60-acre Allaire Farms in Poulsbo with his wife Barbara, had been in poor health the last few years. After missing 2021 while dealing with treatment for colon cancer, Meeking returned to Emerald Downs in 2022 with a nine-horse stable, scoring victories with runners like Wheel Rally and Emerald Sea, and finishing 10th in the $150,000 Longacres Mile with Kingmeister for longtime clients Fred and Cindy Desimone.

“I always enjoy being at the track,” Meeking said before the 2022 season. “I’ve been in this industry over many years and seen a lot of changes, but horse racing is a wonderful sport and I hope it’s around for a long time.”

Robert A. Meeking was born June 6, 1928, in Victoria, BC, and saddled his first starter in 1946 at Lansdowne Park in suburban Vancouver. Meeking trained for a remarkable 75 years, earning a reputation as a patient, high-percentage horseman while conditioning top-flight runners like Longacres Derby winners Mincemeat (1970) and Salad Sam (1976) and multiple stakes winner Bucksaw.

“I think my biggest thrill was my first winner at Santa Anita although a close second was (Mincemeat) winning two Derbies,” Meeking told Daily Racing Form.

In 2018, Meeking participated in a unique contest at Emerald Downs when he saddled Trelawny to a runner-up finish in The Not in Any Rocking Chair Starter Allowance for 3-year-olds and up which have started for a claiming price of $3,500 or less in 2017-18 and whose trainer was born on or prior to June 6, 1928. Trainers of the four runners entered were 94-year-old Arturo Arboleda, 91-year-old H.R. Pat Mullens, 90-year-old Ira Rhodes, and Meeking who had celebrated his 90th the week prior to the race.

Meeking’s final victory was July 22 with Emerald Sea, a 4-year-old filly that rallied for a two-length victory in a $15,000 claiming race. At Emerald Downs, Meeking saddled 198 winners while clicking at nearly 16 percent.