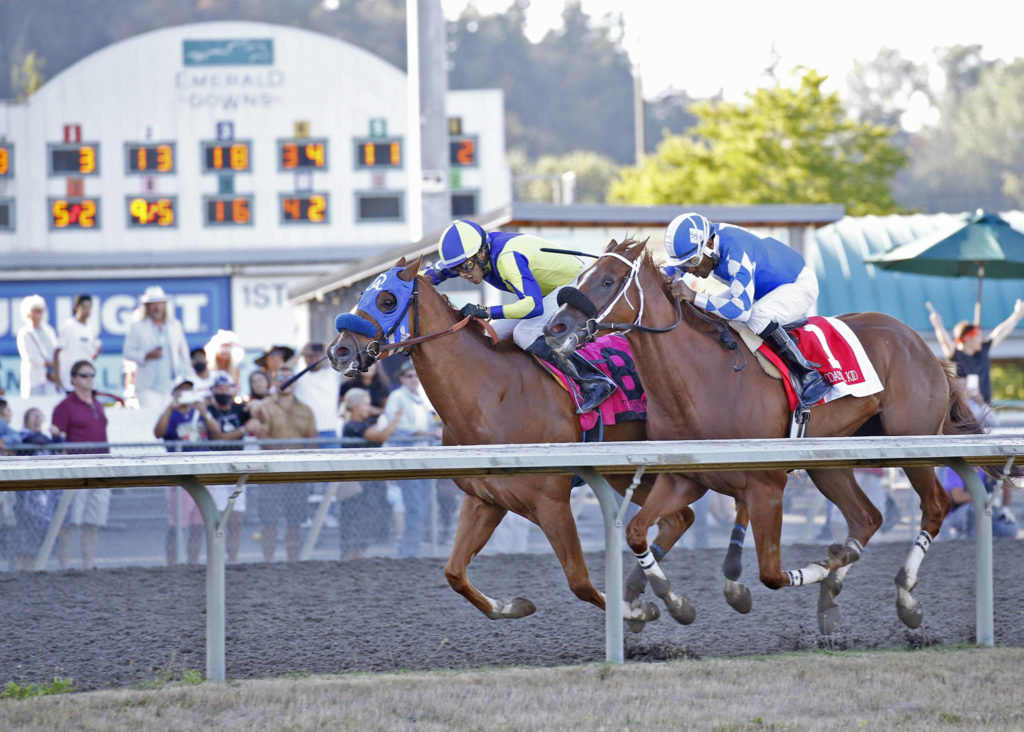 Top Executive (No. 8) edges Coastal Kid in the Muckleshoot Derby

AUBURN, Wash. (Sept. 27, 2021) – Top Executive, undefeated in three starts and the only horse to win three stakes races, was voted 2021 Emerald Downs Horse of the Meeting.

Trained by Blaine Wright and owned by John and Janene Maryanski and Gail and Gerald Schneider, Top Executive swept the 3-year-old colts and geldings division with victories in the Auburn Stakes, Irish Day Stakes and Muckleshoot Derby. The 3-year-old Street Boss gelding won at distances of 6 furlongs, 6 ½ furlongs and 1 1/16 miles, and topped the meet in earnings with $82,800.

Daffodil Sweet won four races including the Washington State Legislators Stakes and was voted Top Older Filly or Mare. Trained by the retiring Chris Stenslie and owned by One Horse Will Do Corporation and Steve Shimizu, Daffodil Sweet was Top 3-Year-Old Filly of 2020 and is the only horse to win Emerald Downs titles in 2020 and 2021.

Owned by Blue Ribbon Racing Ladies and trained by Cooper, Koron was 3 for 3 and swept the Barbara Shinpoch Stakes and Washington Cup Juvenile Fillies in convincing fashion.

Float On was voted Top Claimer, compiling a 4-1-2 record in eight starts while winning two races apiece for trainers Charles Essex and Candi Cryderman. A 3-year-old Bluegrass Cat gelding, Float On was one of six horses to win four races at the meet: Bella’s Back, Daffodil Sweet, Float On, Judicial, Mean Sharon, Queen Breezy.

Alex Cruz won a second consecutive riding title, edging out Julien Couton 75-74 for the crown while Juan Gutierrez finished a close third with 72 wins. Cruz also won Top Riding Achievement for his amazing Sept. 19 triumph without irons aboard 2-year-old filly Akasi, and the Lindy Award for accomplishment and sportsmanship as voted by the Emerald Downs’ jockeys.

Joe Toye won his first Emerald Downs’ training title by a 29-26 margin over seven-time champion Frank Lucarelli. Toye, who has trained at Emerald Downs since the track opened in 1996, also was voted Top Training Achievement for his season-long excellence and 23.5 win percentage.

For the fourth time in six years, John Parker of Lake Bay, Wash., was leading owner with 19 wins.

McKenna Anderson was the top apprentice rider with 12 victories, finishing the meet strongly after a 0 for 17 start.

Background’s dramatic victory with Rocco Bowen aboard in the $100,000 Longacres Mile (G3) was voted Race of the Meeting. Trained by Mike Puhich and owned by Bob and Molly Rondeau, the 4-year-old Khozan gelding tagged Windribbon in the final strides to capture the 86th running of the region’s most famous race.

Trainers Bob Bean and Bonnie Jenne received the Martin Durkan Award for leadership, cooperation, and sportsmanship throughout the meeting. Bean was a popular new addition to the training roster and won with 8 of 81 starters and was accompanied during morning workouts by canine sidekick Brownie.

Harbor the Gold was the leading stallion for the eighth straight year and 11th in the last 12, siring 22 winners to edge Abraaj (21) and Coast Guard (20) for the title.

Emerald Downs Horse of the Meeting