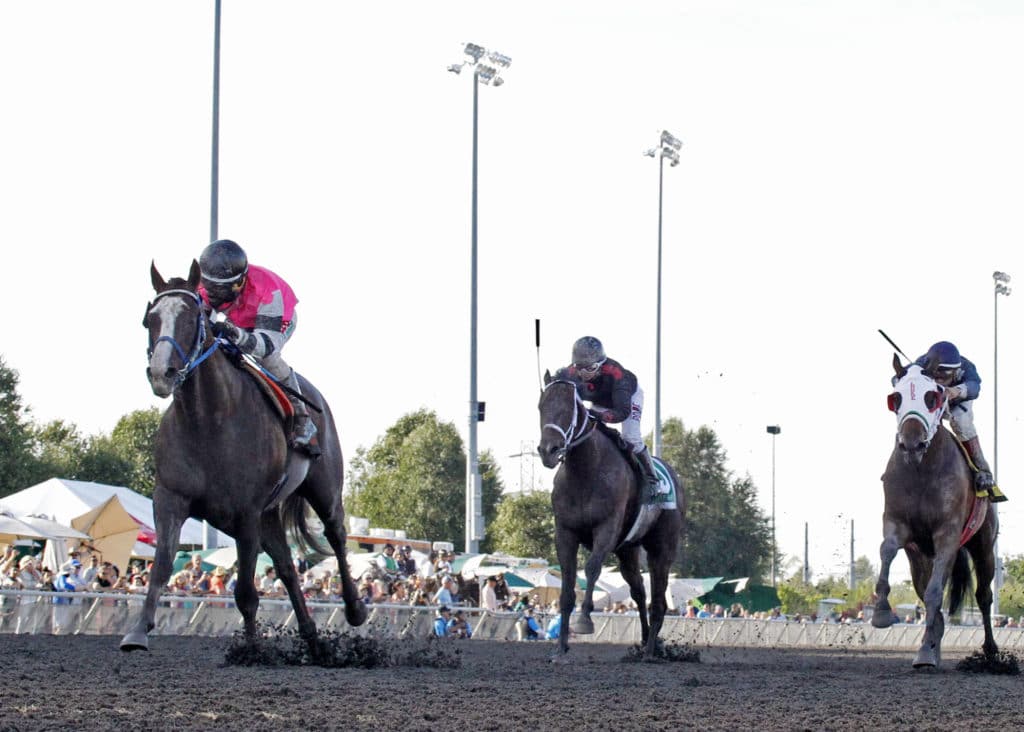 The chestnut gelding overtook Boundary Bay and long shot Smoothee Lee in the final furlong, rolling home to a 2 ¾-length victory in the $50,000 Seattle Slew Stakes for 3-year-old colts and geldings.

With the victory, Sippin Fire became the first double stakes winner at the 2018 meeting and has three stakes wins overall (2017 Washington Cup Juvenile, 2018 Coca-Cola, 2018 Seattle Slew).
A Washington-bred by Harbor the Gold-Bahati, Sippin Fire is 4-1-0 in seven career starts with earnings of $102,688 including $26,675 for Sunday’s victory.

Sippin Fire settled in fourth place early, as Freiburg set fractions of :23.38, :46.56 and 1:10.25, then rallied four wide into the lane and swept past Boundary Bay and Smoothee Lee for a convincing victory.

“I lost a lot of sleep the last few nights worrying about the mile and a sixteenth,” Bowen said. “I have to give credit to everyone at the barn for an amazing job. This horse is special.”

Boundary Bay, ridden by Aaron Gryder at 118 lbs, edged Elliott Bay for third and paid $4.60 to show. The full brother to 2016 Emerald Downs Horse of the Meeting O B Harbor has now finished third in all three stakes this season for 3-year-old colts and geldings. 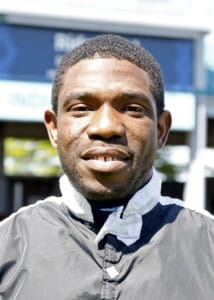 Henry, riding 15-1 long shot Shopping Tizzy, was headed to victory when the 3-year-old filly veered in suddenly in the final sixteenth of a mile, unseating the jockey. Henry hit the ground hard, and appeared to be grazed either by the rear leg of Shopping Tizzy or oncoming Dakota’s Tango.

After laying virtually motionless for several minutes, Henry was carried off the track on stretcher and taken to Valley Medical Center in Kent, where the jockey was said to have a mild concussion and a back contusion.

A native of Jamaica, Henry is in his first season at Emerald Downs and has ridden seven winners in 73 mounts.

Shopping Tizzy was uninjured in the incident.

NOTES: Bowen’s five wins boosted his season total to 59, and he owns a 22-win lead on Kevin Orozco atop the riders’ standings. . .Bowen also leads all riders with four stakes wins, and is No. 6 all-time with 29 stakes wins at Emerald Downs. . .Bowen previously rode five winners at Emerald Downs on September 16, 2017. . .The track record is six wins held by Kevin Radke, Seth Martinez and Julien Couton, who accomplished the feat last Tuesday. . .Bowen and Couton share the same jockeys’ agent, David “Marbles” Singer, who also represents Gary Wales. . . .Bullock has 24 stakes wins at Emerald Downs, and is tied with Larry Ross for No. 8 all-time. . .Emerald Downs is the only track with a stakes named in honor of the 1977 Triple Crown winner, and Seattle Slew owners Karen and Mickey Taylor presented the trophy to the winning owners. . .Harbor the Gold is No. 1 all-time with 59 stakes wins as a sire at Emerald Downs, including three this season. . .Sunday marked the midway point of the 2018 season, day 34 of a 67-day meeting. . .In the $20,500 sub-feature for 3-year-olds and up, Kaabraaj ($10.20) ran the fastest 6 ½ furlongs of the meet, 1:14.31, in rolling to a gate-to-wire victory over a tough field of veterans. A 6-year-old Washington-bred by Abraaj, Kaabraaj holds the track and state six-furlong record of 1:06.86, set April 23, 2016. . .Trainer Bill Tollett collected his first two wins of the season, scoring with Come On Cozzene ($7.60) and Bell of Rainier ($5.40). . .Mixo ($11.60) tagged Royal Privacy in the final jump of race six, a $10,000 starter allowance for 3-year-olds and up. A 4-year-old Abraaj gelding, Mixo ran six furlongs in 1:08.22 and is 1-2-0 in three starts at the meet. . .Live racing resumes Friday with first post 6:30 p.m., and includes a $36,777 carryover in the $0.20 Jackpot Pick 7.