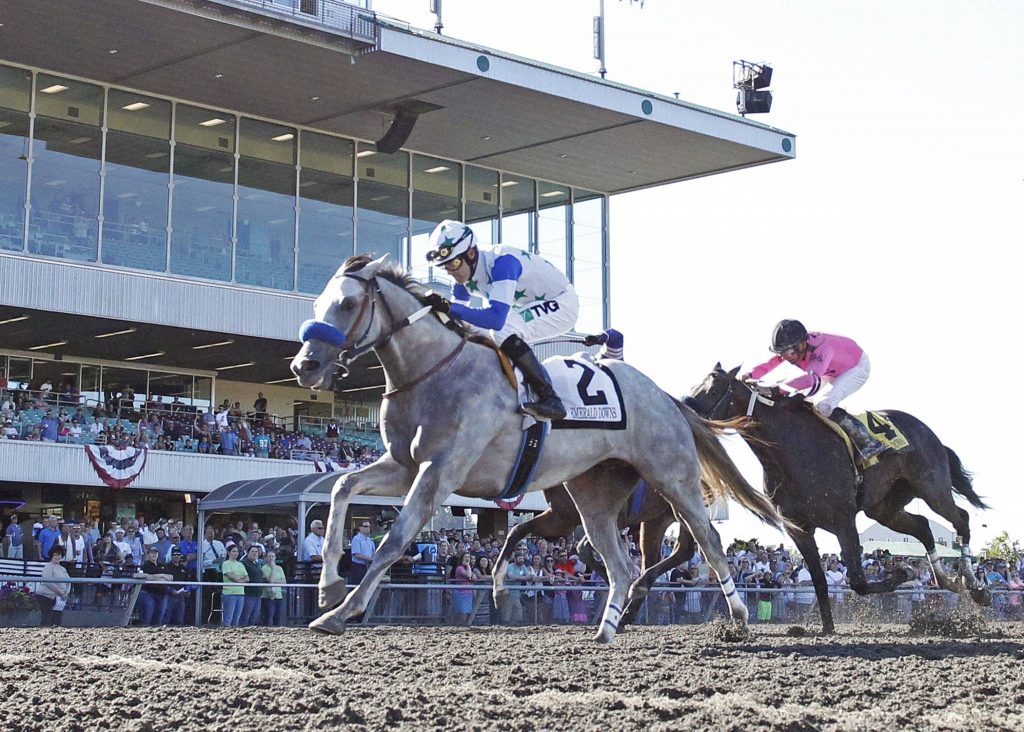 AUBURN, Wash. (July 30, 2017) – Riser proved he could handle a classic distance with an authoritative 1 ¼-length victory over Aqua Frio in the $75,000 Emerald Downs Derby for 3-year-old colts and geldings Sunday at Emerald Downs.

Aqua Frio, ridden by Isaias Enriquez at 122 lbs, edged More Power to Him by a head for second, and gave Wright his third straight exacta in this year’s 3-year-old division: Riser defeated Aqua Frio in the Coca-Cola Stakes, Aqua Frio edged Riser in the Seattle Slew, and Riser turned the tables in the Derby.

“I never envisioned Riser going a route when we first got him, but our entire staff has done a great job with this horse, especially (assistant) Coco Lopez, ” Wright said. “I told Jared this was the time to try going long and it worked out.

“Aqua Frio, what can you say about him? He’s a tough little horse.”

Becoming the first Ohio-bred to win the Derby, Riser blazed through fractions of :22.99, :45.80, 1:09.78 and 1:35.71, and entered lane with a two-length advantage. Riser shook off Monydontspenitself in mid-stretch, and held off Aqua Frio and California invader More Power to Him for the victory.

“He travels really easy, he goes :45 and change and he’s very comfortable,” Flores said of the winner. “It’s not easy to go a mile and en eighth and have something left, but he’s a warrior.”

While Riser compiled two wins and a second in the four-race series, Aqua Frio had a win, two seconds and a fourth. Owned by Peter Redekop, the Uncle Mo colt is 3-7-1 in 12 starts overall with earnings of $151,450.

More Power to Him, with Rocco Bowen aboard at 122 lbs, was rolling late and just missed second place. The Slew’s Tiznow colt now has six stakes placings and over $180,000 in earnings, but is still looking for his first stakes win.

Monydontspenitself, routing for the first time in his six-race career, tracked Riser for nearly a mile before giving way, and Sharkzilla finished fifth.

Distortedatthebar was scratched earlier in the day. 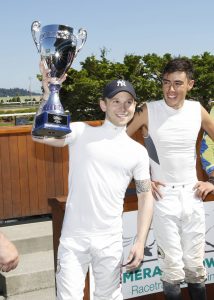 NOTES: Wright also won the fifth race with Blame It On Royce ($4.60) and tops the standings with 36 wins and six stakes wins. . .Flores tops the jockeys’ stakes standings with three wins. . .Riser is only the fourth favorite in 22 years to win the Derby, and the fifth to lead gate-to-wire. . . Jockey Francisco Orduna-Rojas scored his maiden victory aboard Triple G ($18) for trainer Jason Homer in Sunday’s second race. Orduna-Rojas had been 0-for-24 at Emerald Downs and 0-for-55 lifetime before the win aboard the 3-year-old Harbor the Gold colt. Way to go, Francisco!. . .Rockport Birdie ($7.80) made it five straight wins and also became the meet’s first five-time winner with an authoritative victory in race three for trainer Vince Gibson and owner Paul Johnson. A 6-year-old Rockport Harbor mare, Rockport Birdie has wins this season for trainers Charles Essex, Candi Tollett, Bill Tollett and Gibson. . .With Rockport Birdie’s win, Gibson became the 14th trainer with 300 career wins at Emerald Downs. . .Erick Lopez romped in the 2017 Jockey Foot Race to benefit the Permanently Disabled Jockeys Fund, and over $4,000 in donations was raised for the PDJF. . . Kevin Orozco finished second in the Foot Race, but became dehydrated and was off his remaining mounts including Aqua Frio in the Emerald Downs Derby. . .In a rare double disqualification, the first and third-place finishers in the $18,500 sub-feature for 3-year-olds—Double A. Prospect and Buckley Bay—were both taken down following a trainers’ objection and Candy for Three ($20.80) was promoted from second to first place. . .With three winners reaching double digits, the $0.50 Pick 5 paid $6,953. . .Live racing resumes Friday with first post 6:30 p.m.
–##–