From Durbin South Africa, Barnes most recently rode in California where he had an aggregate 20 mounts at Santa Anita and Golden Gate Fields, including his first North American winner on Two Steps of Glory ($24.40) for trainer Steve Miyadi.

Barnes said he came to Emerald Downs at the urging of fellow countryman Leslie Mawing and has hired agent Keith Drebin to handle his book at Emerald Downs.

Barnes, who says his first name is pronounced “Joh-Say”, comfortably tacks 108 lbs on his diminutive 4’ 7” frame. He’s already something of a world traveler with stays in Hong Kong and a three-month stint at the famous British Riding Academy in Newmarket, England.

While in South Africa, Barnes rode 22 winners and says his apprenticeship runs through October 18, meaning Barnes will get 5 lbs off every mount through the remainder of the meet. And Emerald Downs has a history of successful bug riders including recent sensations Eliska Kubinova, 75 wins in 2012, and Cassie Papineau, 70 wins in 2009.

According to Barnes, being able to ride the rest of the season as an apprentice is a big reason he took Mawing’s advice and headed north to Emerald Downs. While California has many good points, Barnes wasn’t getting lots of mounts there, which is something he figures will happen in Auburn. He’s already named on six horses this weekend including a pair for top trainer Blaine Wright.

“I’d like to get at least 10 wins before the end of the season,” Barnes says. “It’s a realistic goal, and it could help me when I come back next year (2017) as a journeyman.”

THE CHILLI MAN IN A HOLDING PATTERN

The status of 2-year-old sensation The Chilli Man remains unchanged Thursday, less than two weeks after the gelding romped as a debut winner at Emerald Downs.

Owner Heidi Nelson has received several offers and has said to be considering multiple options including keeping The Chilli Man or selling all or part of her share of the son of Trappe Shot.

At this point, The Chilli Man is scheduled to make his next start in the $50,000 Emerald Express on July 17. The Monique Snowden trainee would likely be a prohibitive favorite considering his debut produced an 11-½-length victory and the third fastest clocking–:50.22–at 4 ½ furlongs in track history. The victory earned an 81 Beyer Speed Figure, which at the time was the fourth highest among all 2-year-olds in the country this year.

The $0.20 Pick 7 provides an attractive incentive for the wagering public on Friday as the track’s newest exotic wager kicks off the seven-race card with a $4,839 carryover.

The card averages more than eight horses per race including two 10-horse fields. The feature race matches up older fillies and mares at one mile for a $15,000 claiming tag. Seeking the Light has been installed as the 2-1 morning-line favorite, while Diamonds Dena, coming off two wins, is the 7-2 second choice. The 5-year-old mare is five-for-seven at Emerald Downs.

For the first time in track history, Emerald Downswill host four Saturday night race cards in July. This Saturday, it’s Ladies Night! All ladies attending the races get free admission, along with great specials throughout the night.

All four Saturdays in July will have night racing with first post at approximately 6:30 p.m.

On Sunday, Thoroughbreds won’t be the only breed competing at Emerald Downs. The track’s annual Wiener Dog Races return with its new mantra: “more dogs, more races, more fun!” This time around, there will at least four races including a heat for “Wiener Wannabees.”

On Saturday, July 16, Emerald Downs will host a Food Truck Festival. On July 23, it is College Night, where all college students get into the track for free with their college ID. For the final Saturday race night, July 30, prices will be reduced to $1 on Dollar Night.

Undefeated colt Barkley made an appearance on the racetrack Thursday morning after defeating Mach On Rules in last Sunday’s Seattle Slew Stakes. The 3-year-old Munnings colt is now six-for-six heading into next month’s Emerald Downs Derby. 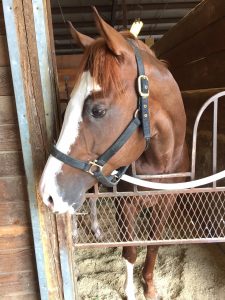 Barkley in his stall Wednesday

Barkley and Mach One Rules both emerged from Sunday’s epic Seattle Slew Stakes clash in good order and its on to the $75,000 Emerald Downs Derby on Sunday, July 31 for both 3-year-olds. Barkley is tied with Italian Warrior and Xerxes for most wins at the meet with four apiece and ranks No. 1 in earnings with $93,775 and No. 1 in stakes wins with three. . .In their three match-ups this season, Barkley and Mach One Rules have earned identical Beyers of 84, 81 and 78, yet Barkley has won all three races by two heads and a neck. “I’m going to take Mach One Rules to a Grade 3 in California, it’d be easier than running against Barkley,” quipped Mach One Rules trainer Frank Lucarelli. . .Another 3-year-old to watch is Algenon, a Kentucky-bred by Aragorn–Alpine Yodel with four recent works here for trainer Len Kasmerski and owner Roz Barclay. Algenon is stakes-placed five times including a third in the $100,000 California Derby at Golden Gate Fields. . .92-year-old Don Munger begins the week with 99 career wins at Emerald Downs, and could hit the century mark with Command Authority in Friday’s second race. Whenever Munger does get his 100th wins, Emerald Downs will honor the milestone with a small ceremony in the winner’s circle. . .Average field size is 8.32 horses for this weekend’s 25 races, including a whopping 9.2 average for Sunday’s 10-race card. . .Seattle Stakes winner Invested Prospect faces older fillies and mares in Saturday’s $18,500 co-feature at six furlongs. A Washington-bred by Abraaj, Invested Prospect is undefeated in three lifetime sprints. . .Archie Graham makes his fourth start for the Emerald Racing Club in Sunday’s ninth race for older $10,000 claimers at 1 1/16 miles. He’s Cagey, a 7-year-old Idaho-bred, guns for a fourth straight win under jockey Erick Lopez. . .Sunday’s handle of $1,691,411 was up 12.9 percent from the same date last year. . .No stakes races this weekend but it’s the calm before the storm. Nominations close Saturday for four stakes to be run Sunday, July 17: $50,000 Mt. Rainier Stakes for 3-year-olds and up at 1 1/16 miles; $50,000 Boeing Handicap for older fillies and mares at one mile…California Diamond, who sold for $35,000 at the 2015 Washington Yearling Sales, is 4-1 on the morning line in Saturday’s $125,000 Santa Anita Juvenile at 5 ½ furlongs. By Harbor the Gold–Carrie’s a Jewel, California Diamond broke his maiden by 2 ½ lengths and earned a 65 Beyer in his June 17 debut at Santa Anita.