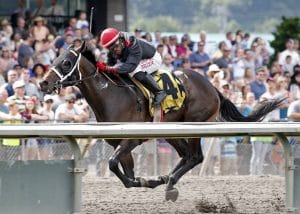 So Lucky and Rocco Bowen winning the Emerald Express

Trainer Howard Belvoir and Vicki Potter’s Rising Star Stable appear ready to swoop in for another score Sunday in the $50,000 WTBOA Lads Stakes for 2-year-old colts and geldings at six furlongs.

Already with four stakes wins at the meet, Belvoir, Rising Star Stable and Pegasus Too send out heavy favorite So Lucky in the Lads. A Washington-bred by Coast Guard-Miss Pixie, So Lucky is unbeaten and untested in two starts, romping by 4 ½ lengths in a five-furlong maiden race, followed by a three-length blowout in the $50,000 Emerald Express at 5 ½ furlongs. So Lucky’s 71 and 66 Beyers are highest in Sunday’s field.

“He’s training really well,” Belvoir said of So Lucky. “He’s worked every week and has two five-eighths in him since his last race. You always guess if they’re runners or not but I always thought he had the ability. He’s always shown speed.

“At first, I wasn’t sure if his head was in it, but that’s changed after the past six weeks. Rocco (Bowen) really hasn’t even used the whip with him. We haven’t even really sent him yet, he just goes to the front on his own.”

Belvoir and Rising Star Stable are 4-1-0 in five stakes races this season. Sensational 3-year-old Barkley came within a head of posting a clean sweep in the four-race series for 3-year-old colts and geldings, and has an outside chance of running next week in the Longacres Mile, while So Lucky aired in his stakes debut in the Emerald Express.

Emerald Downs’ own Joe Withee has a rooting interest in Sunday’s $50,000 Barbara Shinpoch Stakes for 2-year-old fillies at six furlongs.

Coming off a third in the Angie C Stakes, Camano Comet figures to receive strong support at the windows Sunday. A Washington-bred by Council Member-Crème, Withee, David Israel, Al Adams and Charlie Clark with the nom de course “How We Roll” own Camano Comet. They connected with Seattles Best Copy in a 2-year-old filly stakes in 2014, and appear to have a big chance Sunday in the Shinpoch.

“She has a couple of things that winning racehorses have,” Withee said of Camano Comet. “She’s smart, and she does things right. She definitely has a racehorse’s heart—a competitive athlete’s makeup. She tries really hard and breaks well from the gate.

“Like a lot of 2-year-olds, she runs as fast as she can, so we’ll see how she does with the added distance. We’ve been proud of her so far.”

Blazin Beauty, although a maiden, is another top contender. Trained by Frank Lucarelli for owner Darrin Paul, the Kentucky-bred by Tale of Ekati-Rockport Beauty finished second in a maiden special weight, and then finished ahead of Camano Comet while runner-up to Karula in the Angie C.

With seven races on Friday’s card, the Pick 7 will cover each race starting with first. The seven-race card averages more than 8.4 horses per race including a nine and 10-horse field in the final two races, respectively. 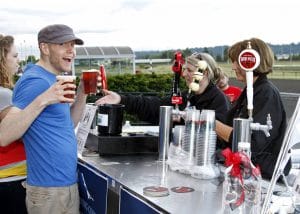 Don’t miss your chance for a Fab Friday bonanza this Friday, as Emerald Downs rolls out its final Brewer’s Night of the season.

Sponsored by Northwest Brewing Company, Brewer’s Night features music from DJ Ottomatic right
outside the popular beer garden, which determines its beer prices by a spin of the wheel. The beer garden features several beers on tap and opens at 6:00 p.m.

Hosted by Jacob Pollowitz (Professor Pollowitz) and Vince Bruun (Mr. Media), The Press Box Podcast begins approximately  30 minutes to post before the first stakes Sunday. The podcast includes an interview with trainer Howard Belvoir, who will saddle So Lucky in the WTBOA Lads and part owner Joe Withee, who will send out Camano Comet in the Barbara Shinpoch.

Jockey Rocco Bowen begins Week 18 with a 75-55 lead over Leslie Mawing in the jockeys’ standings and resumes riding Friday after missing his final six mounts Sunday with a sore foot. In fact, Bowen was back in action Monday, finishing off the board in a pair of stakes at Assiniboia Downs, including a sixth on Break the Silence in the $75,000 Manitoba Derby, won by Inside Straight ($4.90) and jockey Scott Stevens. . . Washington State Legislators Stakes winner B C Z Middleton is on the also-eligible list in Friday’s $75,000 Daisycutter Handicap at five furlongs on turf at Del Mar. . . .Juan Gutierrez celebrates his 47th birthday Saturday. Currently third with 43 wins, Gutierrez is on pace for his 15th straight top-five finish at Emerald Downs. . .According to trainer Mike Puhich, Emerald Downs Derby winner Opportunistic is possible for the $150,000 Canadian Derby at 1 3/8 miles at Northlands Park on August 20. Incidentally, Opportunistic and Barkley were both credited with career-high 86 Beyers in the Derby. . .Barkley still has a chance to run in the Longacres Mile, according to trainer and co-owner Howard Belvoir. If he runs, Barkley would be the first 3-year-old to race in the Mile at Emerald Downs. . .Tournament coordinator Bob Fraser reports 216 teams are signed up for Saturday and Sunday’s Jim Marsh Classic at Emerald Downs. The 3-On-3 basketball tournament will be contested on 32 courts in the north parking lot. . .Hall of Fame trainer Jack Van Berg will be at Emerald Downs on Longacres Mile weekend—August 13 and 14—to sign his book JACK From Grit to Glory. . .Recently retired jockey Joe Steiner will be honored with a special race in his name Sunday at Emerald Downs. . .Saturday’s 10-race card begins with two qualifiers for the $60,000 Bank of America Emerald Downs Championship Challenge at 440 yards. Sorelli, a triple winner at the meet, heads the first division while Rtm Mr Caccia, a 4-year-old that pretty much ran the table last year in Idaho, tops the second division. . .Jack Diz, named after the late Los Angeles Herald Examiner columnist and former Director of Publicity at Hollywood Park, makes his first start at Emerald Downs Friday in in the second race. A 5-year-old gelding, Jack Diz began his career with trainer Phil D’Amato at Santa Anita and scored his maiden victory with Steve Sherman at Golden Gate Fields.