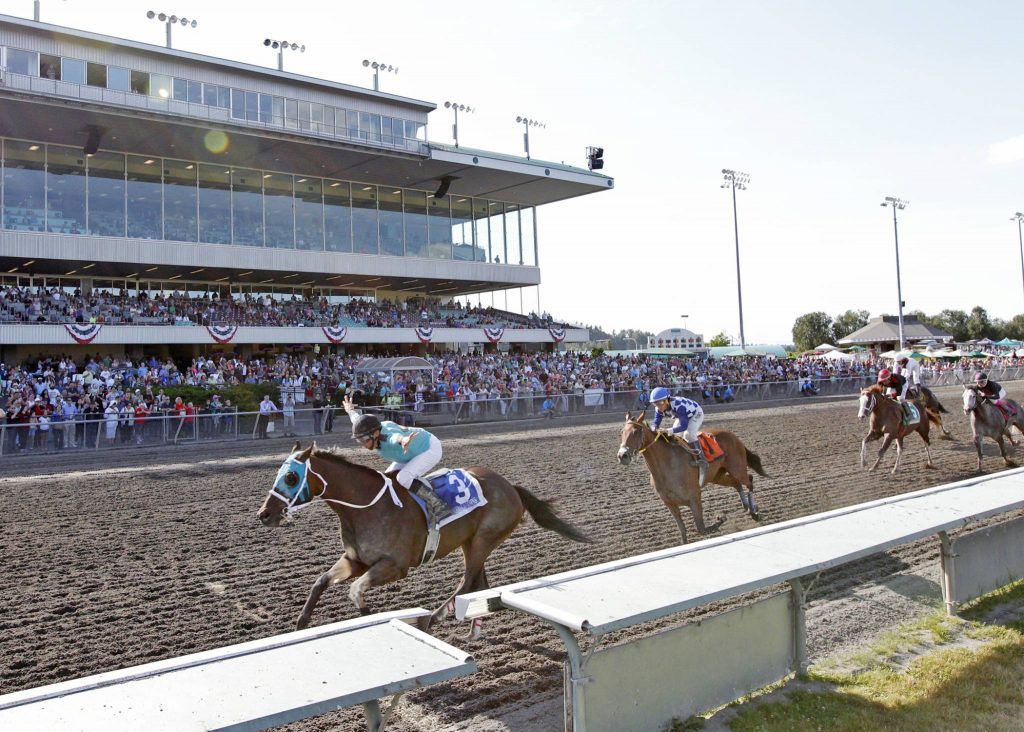 Mach One Rules ready for takeoff in the Mt. Rainier

AUBURN, Wash. (July 16, 2017) – Mach One Rules made it two straight stakes wins with a powerful two-length triumph over Bistraya in Sunday’s $50,000 Mt. Rainier Stakes for 3-year-olds and up at Emerald Downs.

The Mt. Rainier was the final of four stakes on Mile Preview Day as the countdown is officially on for the 82nd running of the $200,000 Longacres Mile (G3) on Sunday, August 13.

With his triumph Sunday, Mach One Rules appears to be the top local threat for the Northwest’s most prestigious horse race. Powering to the lead into the lane, the 2-to-1 second wagering choice turned aside Canadian invader Bistraya in mid-stretch and pulled clear for his fifth career Emerald Downs stakes victory.

“He’s just doing really good mentally and physically, he’s in a zone right now,” Lucarelli said of Mach One Rules. “Hopefully he can stay in it for one more race.”

A 4-year-old Washington-bred gelding by Harbor the Gold-Felice the Cat, Mach One Rules is 6-5-2 in 15 starts with $20-9,356 in earnings. He now has two straight wins after nine consecutive defeats including a series of stinging losses to Barkley.

Papa Frank, Dedicated to You, Moon King, Togrammashousewego and Pleas Be Me rounded out the order of finish.

Trainer Mike Puhich said that Prime Engine, 3-to-1 morning line second choice, was scratched due to a high temperature, and Stryker Phd, who would have been making a fifth straight appearance in the Mt. Rainier, was a late scratch at the gate. 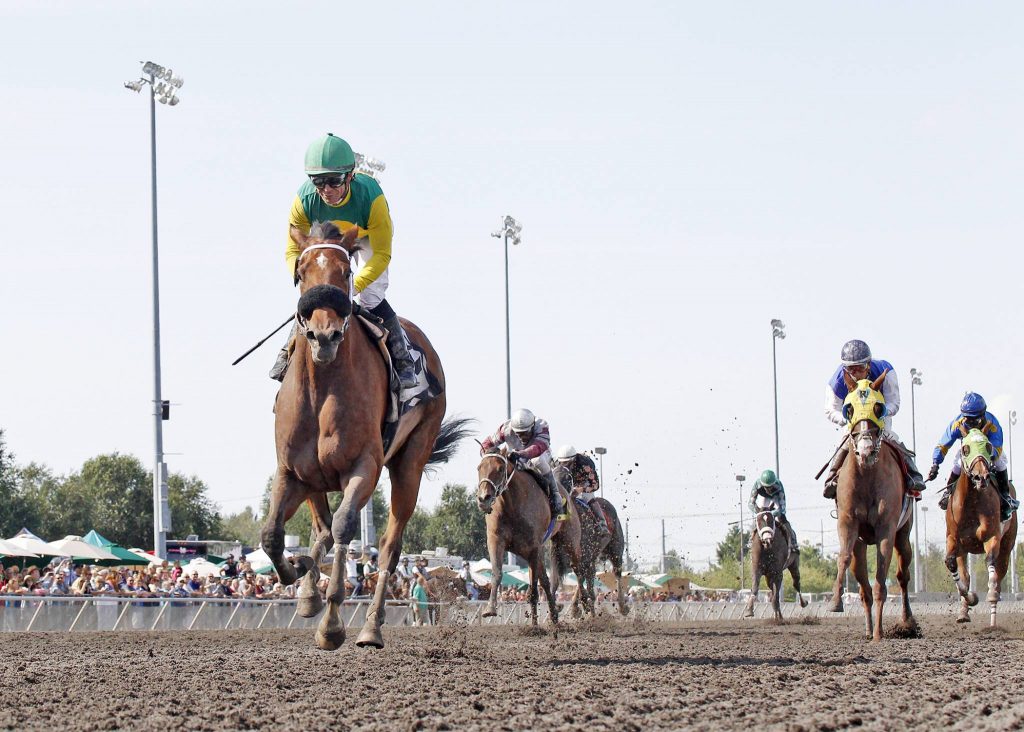 Citizen Kitty asserted herself as Emerald Downs’ top older filly or mare with a dominant 4 ½-length victory over Princess Katie in the $50,000 Boeing Stakes for older fillies and mares.

Ridden by Julien Couton at 123 lbs, Citizen Kitty ran one mile in 1:36.84, and paid $8.40, $5 and $3.60 as second choice in the wagering. Jeff Metz is the winning trainer for owners Bruce and Cass Maller of Incline Village, Nevada.

A 5-year-old Washington-bred by Proud Citizen-Katowice, Citizen Kitty has been a study in consistency this year, compiling two wins and three seconds in five starts led by victories in the Hastings and Boeing Stakes and a second in the Washington State Legislators.

In the Boeing, Citizen Kitty sat off the pace as My Heart Goes On set fractions of :23.38 and :46.08, and made a sweeping four-wide move to the lead into the stretch, and powered home with authority. The impressive victory makes her strictly the one to beat in the $65,000 Emerald Distaff at 1 1/8 miles on August 13. 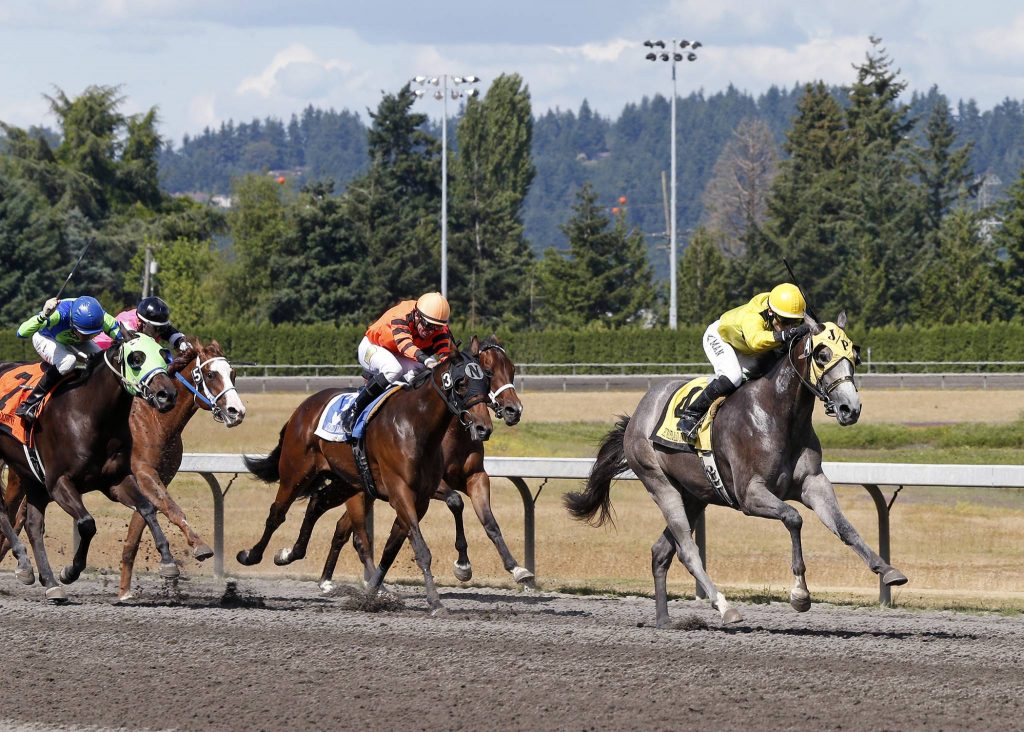 First-time starter He’s Not Grey rallied from far back to post an 11-to-1 upset in the $50,000 Emerald Express for 2-year-old colts and geldings.

A California-bred by Slew’s Tiznow, He’s Not Grey is the first first-time starter to win the Emerald Express in its 22-year history. He’s Not Grey sold for $10,000 at the 2016 Barretts Fall Sale, and Parker credited Roddina Barrett for picking out the gray colt.

“He’s been the talk of the barn, he’s been doing so good,” a jubilant Parker said. “Winning this race is unbelievable.”

He’s Not Grey commenced a four-wide bid on the turn, collared Elliott Bay and Brown Tiger past mid-stretch and drew off to win with authority.

Brown Tiger, who dueled with Elliott Bay through fractions of :22.25 and :45.91, finished third under Julien Couton and paid $3.40. Sippin Fire, the 9-to-5 favorite, finished fourth and was followed by Elliott Bay, Vicente’s Shadow and Rosie’s Reward.

For Tollett it was her second career stakes victory, both this year with gray horses owned by Parker. Sharkzilla scored a 23-to-1 upset in the Auburn Stakes for 3-year-olds.

The $50,000 WTBOA Lads Stakes at six furlongs on August 6 is next for 2-year-old colts and geldings. 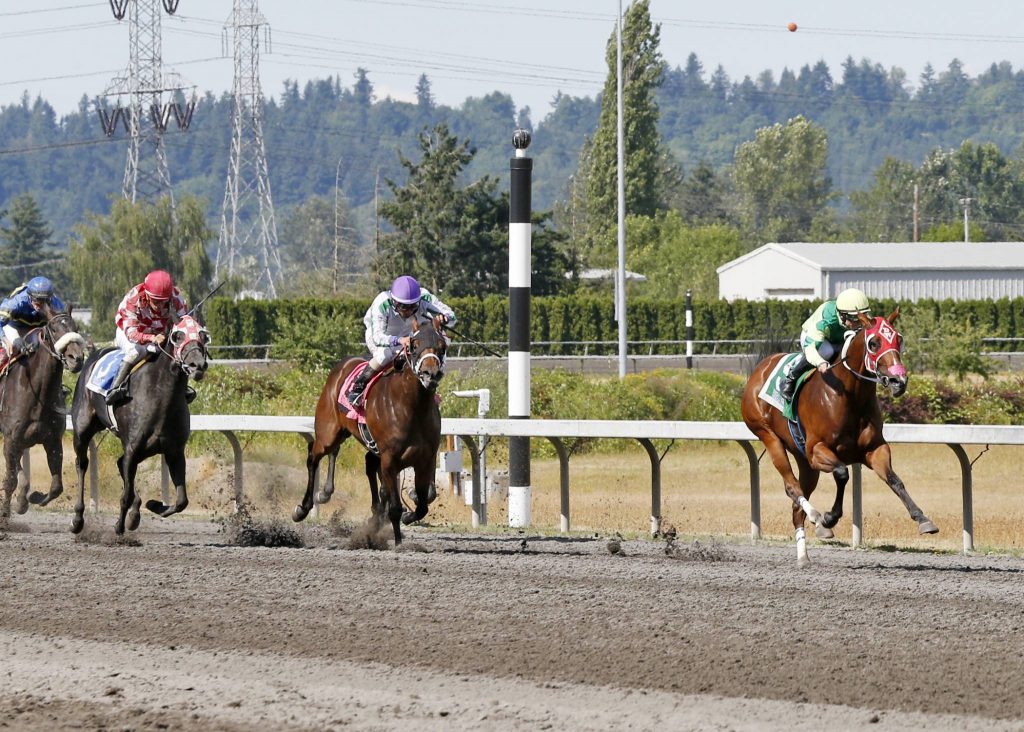 Bella Mia clear to the wire in Angie C

BELLA MIA TOO MUCH IN ANGIE C STAKES

Owned by John and Janene Maryanski of Auburn, Bella Mia is 2-0-0 in three starts with earnings of $38,788. A Washington-bred by Harbor the Gold-Bella Campana, Bella Mia broke her maiden by 5 ¼ lengths at five furlongs two weeks ago, and Sunday’s extra half-furlong proved no issue.

Faith Flys Again, bidding to give trainer David Martinez a third straight win in the Angie C, finished second at odds of 35-to-1 and paid $22 and $8.60.

Canadian shipper My Aunt Mo, the 2-to-1 second choice, overcame a rough beginning to finish third and paid $3, while Philly Baby, the 7-to-5 favorite, encountered traffic in the stretch and finished fourth. Manny’s Way, Sea N Redd, C I M Sweet, Come Find Me, and Goldie’s Darlins completed the order of finish.

Bella Mia became the ninth straight Angie C winner to lead gate-to-wire. Smarty Deb in 2007 was the last come-from-behind winner of the race, and the daughter of Smart Strike later became the first Emerald Downs’ runner to appear in the Breeders’ Cup.

The $50,000 Barbara Shinpoch Stakes at six furlongs on August 5 is next for 2-year-old fillies. 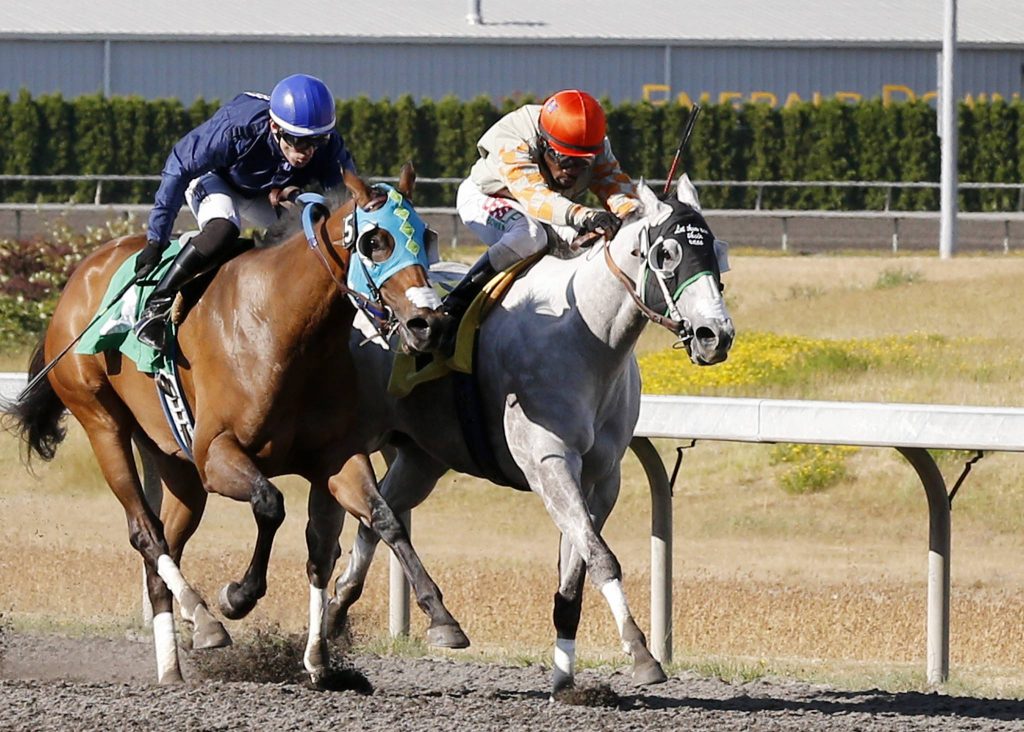 Iwannabeadivatoo (on rail) would not be denied

NOTES: The $0.50 all stakes Pick 4 returned $526.20. . .Blaine Wright tops all trainers with five stakes wins at the meet, while Frank Lucarelli, Jeff Metz and Candi Tollett have two stakes wins each. . .It was a great day for Washington-breds with Bella Mia, Citizen Kitty and Mach One Rules all scoring stakes wins for the Evergreen State. . .Harbor the Gold, sire of Mach One Rules and Bella Mia, has a record 50 stakes wins at Emerald Downs. Slewdledo with 27 stakes wins is a distant second. . .Citizen Kitty and Mach One Rules are the first double stakes winners at the meet. . .Although it wasn’t a stakes race, Iwannabeadivatoo ($11) and Kiss My Lulu battled through a superior stretch run in the $20,000 claimer for fillies and mares, the former prevailing in 1:10.15 under Rocco Bowen for trainer Roddina Barrett and owner Luke Lindsey. A 5-year-old Preachinatthebar mare, Iwannabeadivatoo has finished first, second or third in 24 of 29 career starts. . .Bowen, Kevin Orozco, Isaias Enriquez and Julien Couton all rode two winners Sunday. . .Juan Gutierrez’ victory on He’s Not Grey was his 1,319th win at Emerald Downs and his 62nd stakes win. He needs 100 wins to tie Gallyn Mitchell’s Emerald Downs’ record of 1,419 wins. . .Live racing resumes Friday with first post 6:30 p.m., and features a carryover in the $0.20 Pick 7 of $14,585.
–##–