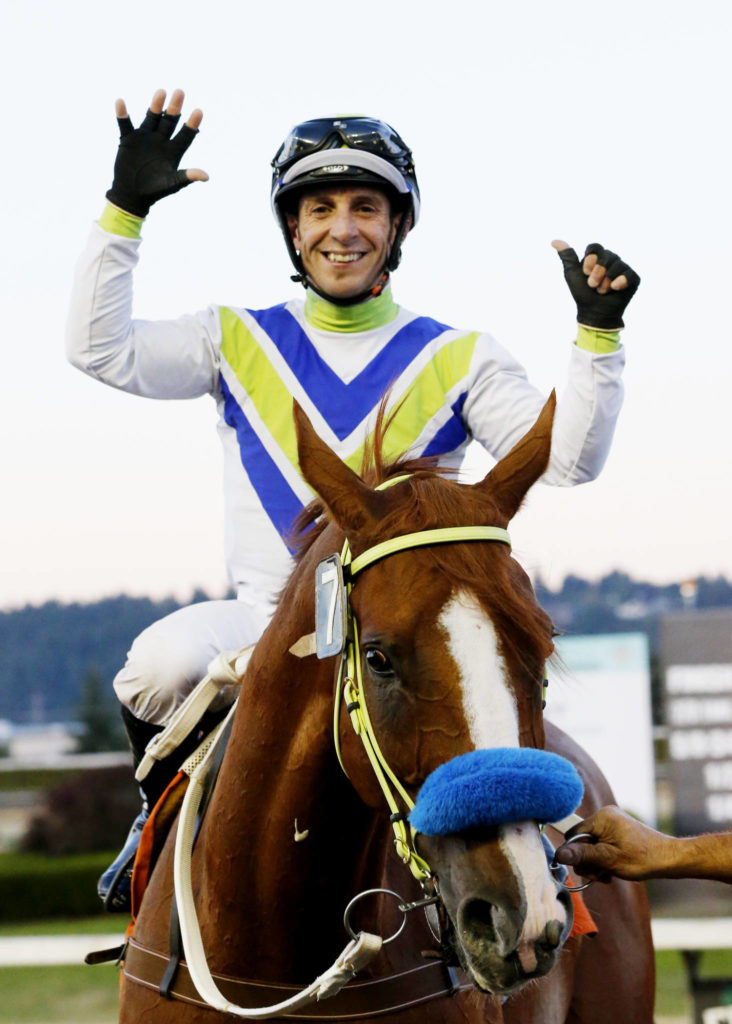 The 37-year-old Frenchman rode six winners on the nine-race card, tying the track record previously set by Kevin Radke in 2002 and Seth Martinez in 2008.

Couton compiled a 6-1-1 mark in nine mounts, and tied the record with a gate-to-wire victory aboard Blackford ($3) in the ninth race finale.

Afterward, Couton revealed that he accomplished the feat while riding with a broken toe, sustained in the final race Sunday.

“I managed the pain okay, and I rode for good trainers who had their horses in the right spots,” Couton said. “It all came together tonight.”

Couton began the night with a victory aboard Bye Bye Sal in race one, which also was his 200th career win at Emerald Downs. He also won race two with Per La Bella ($3.40), race five on Better in Leather ($3.60), race six aboard Outa Here($9), race eight on Freedom Hill ($4.80) and the nightcap on Blackford.

Couton nearly bagged a seventh winner Thursday, but Levitation missed by a neck to Kota Copy in race seven. Couton’s other two mounts were a third on Camano Comet in race three, and a fourth aboard That’s Good in race four.

In the featured $15,600 Muckleshoot Casino Purse, Couton swept Freedom Hill from behind for a two-length victory in 1:14.92 for 6 ½ furlongs. The winner, owned by Dr. Rodney Orr, is a 5-year-old Summer Bird gelding with a 4-0-2 record in 13 career starts.