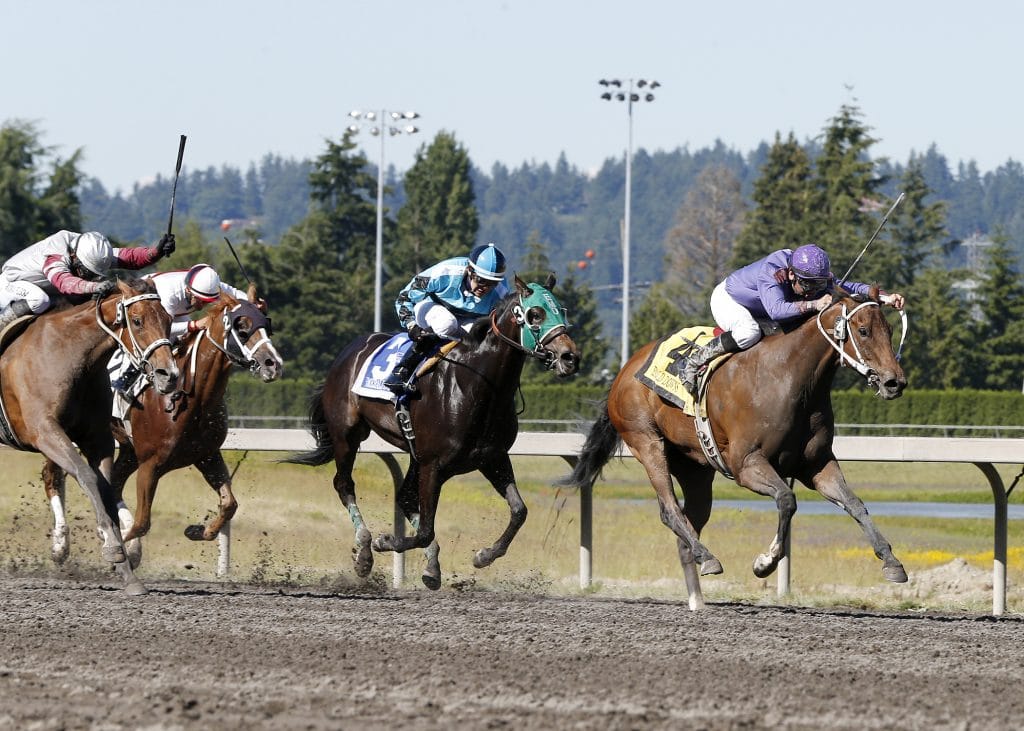 In a major reversal of form, Find Joy held off Princess Kennedy and notched a 1 ¼-length victory Sunday in the $50,000 Kent Stakes for 3-year-old fillies at Emerald Downs.

After finishing third in the Seattle Stakes, Find Joy was beaten 18 ¼ lengths while finishing sixth in one-mile Irish Day Stakes, and was pretty much overlooked on Sunday.

In fifth place on the backstretch, it was apparent Find Joy was loaded with run at the quarter-pole and just needed room to maneuver past the leaders. Enriquez angled his mount off the rail and together they swept past the leaders in mid-stretch, and had plenty left to hold off a late bid by Princess Kennedy.

“Every single work coming up to this race she was doing better and better,” Enriquez said. “When I broke out of the gate, she dragged me to the lead but I didn’t want to be there. It took about three-eighths to get her to relax and then she relaxed very nicely. When it was time to fire, she just went for it.”

A Kentucky-bred by Drosselmeyer-Hurricane Hannah, Find Joy is 2-0-3 in eight starts with earnings of $73,335 including $27,500 for Sunday’s triumph. She began her career in Maryland and also raced in Southern California, where her best showing was a third in the Anoakia Stakes last fall.

Princess Kennedy, ridden by Rocco Bowen, rallied from far back to snatch second place and paid $4.60 and $3.20. The track’s champion 2-year-old filly of 2015, Princess Kennedy has improved in all three starts this year—finishing fifth in the Seattle Stakes, third in the Irish Day and second in the Kent.

Brookys Star, ridden by Eswan Flores at 117 lbs, finished third, one length back of Princess Kennedy, and paid $4.40 to show.

My Heart Goes On, the even-money betting favorite, led through six furlongs in 1:10.53 but weakened late and finished fourth. Profound Moment, Sunrise Glow and Rods Song completed the order of finish.

The 3-year-old filly division now has produced three different winners in the first three stakes this season. Neither Invested Prospect, winner of the Seattle Stakes, nor Princess Katie, winner of the Irish Day Stakes, ran in Sunday’s race.

NOTES: The Chilli Man ($3.40) delivered a sensational debut in Sunday’s $18,500 maiden special weight for 2-year-olds, racing to an 11 ½-length victory under Joe Steiner in a meet-best :50.22 for 4 ½ furlongs. Owned by Heidi Nelson (Nelson Family Racing), The Chilli Man is a Kentucky-bred by Trappe Shot-Triumphantly. The winning time is just slightly off Trackattacker’s track record of :49.98 set in 2014. . .Italian Warrior ($7.80) rolled to a 1 ¾-length victory in race five and joined Xerxes as the only four time winners at the meet. A 5-year-old Arkansas-bred by A.P. Warrior, Italian Warrior has reeled off three straight wins since being claimed for $2,500 by trainer Wilfrido Montano. . .Trick Or Retreat ($11) rallied from last to edge Arrom Bear in the $21,000 sub-feature for $40,000 optional claimers, running 6 ½ furlongs in 1:15.62. Erick Lopez rode the winner for trainer Doris Harwood and owners Mark Malnati and Robert McKay. . .Archie Graham, owned by Emerald Racing Club, finished fourth in Sunday’s sixth race for older $10,000 claimers. He’s Cagey ($6.80) prevailed as the betting favorite and was claimed by trainer Candi Tollett and owner John Parker. . .Scat Daddybaby ($3.80) improved to 4-for-6 in one-mile races with a gate-to-wire victory in race eight for older $25,000 claimers. Owned by Mike Feuerborn and trained by Robbie Baze, the 6-year-old Scat Daddy gelding zipped eight panels in 1:35.09, the second fastest mile of the meet. . .Erick Lopez rode three winners Sunday and is tied with Juan Gutierrez for third in the jockeys’ standings at 29 wins apiece. . .Gutierrez, Rocco Bowen and Joe Steiner rode two winners each Sunday. . .Live racing resumes Friday with first post 6:30 p.m.
–##–