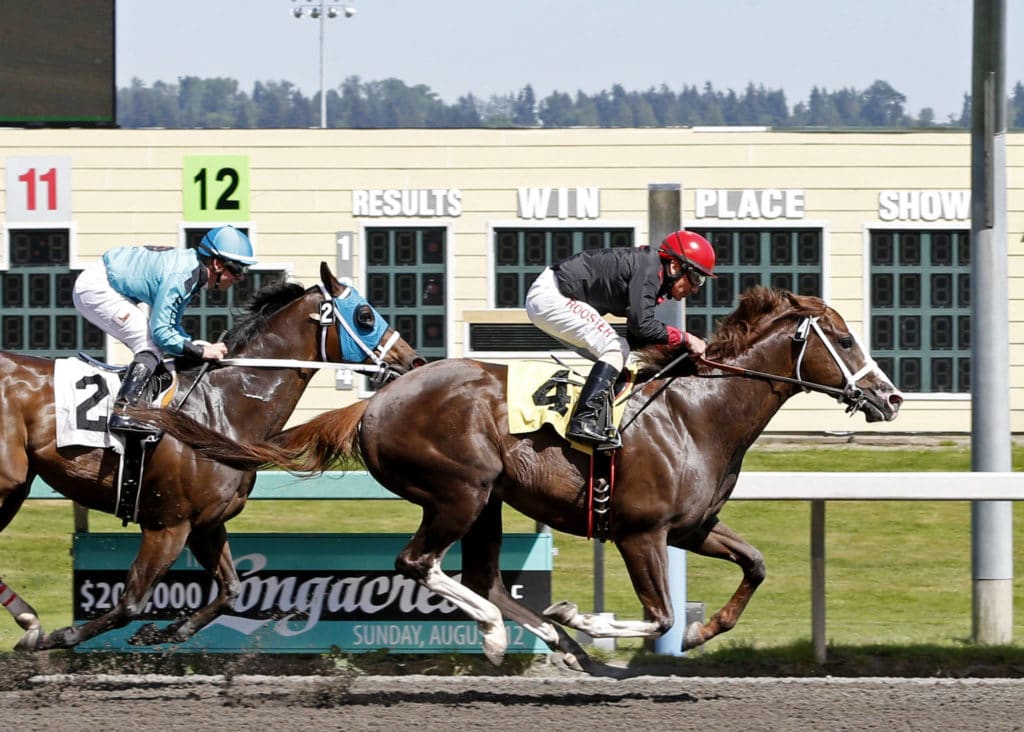 BARKLEY BACK IN WINNER’S CIRCLE, EDGES MACH ONE RULES

AUBURN, Wash. (May 13, 2018) – Barkley turned in a sensational 2018 debut Sunday at Emerald Downs, unleashing a powerful stretch run and notching a three-quarter-length victory over archrival Mach One Rules in the $21,500 allowance feature for 3-year-olds and up.

Mach One Rules, 2017 Washington Horse of the Year and Emerald Downs’ Horse of the Meeting, rallied strongly along the rail but was outfinished by Barkley through the final furlong. It was the sixth time in nine meetings that Barkley has finished ahead of Mach One Rules.

The 1-2 favorite ridden by Julien Couton at 120 lbs, Mach One Rules paid$2.20 to place. So Lucky, also trained by Belvoir, finished third, while Grinder Sparksaglo finished fourth. C R Bullitt was scratched earlier in the day.

A prep for the $50,000 Governor’s Stakes on June 3, Sunday’s race unfolded as many envisioned, with the speedster So Lucky leading through fractions of :22.28 and :45.12.
Barkley trailed the field from the inside, but was only three lengths off the pace. Angled out into the lane by Matias, Barkley accelerated powerfully and overhauled So Lucky and Mach One Rules for the victory.

Mach One Rules ran well in defeat, slipping through inside into the stretch and finishing strongly to the wire. A 5-year-old Washington-bred by Harbor the Gold, Mach One Rules is 7-8-2 in 20 starts with earnings of $291,026.

Sunday’s race sets up a dandy rematch in the six-furlong Governor’s. Last year, Barkley edged Mach One Rules by a neck in 1:07.92.

NOTES: Barkley’s victory was a great birthday present for Washington Hall of Fame Trainer Howard Belvoir, 74 Sunday. . .Hit the Beach ($8.80) nailed Oh Marvelous Me in the final strides to capture the $18,500 co-feature for 3-year-olds and up at 5 ½ furlongs. A 5-year-old Harbor the Gold gelding, Hit the Beach covered 5 ½ furlongs in 1:03.09 with Eswan Flores riding for trainer H.R. Mullens. . .Rocco Bowen rode two winners and tops the jockeys’ standings with 15 wins, while Flores Gary Wales and Kevin Orozco are tied for second with seven wins apiece. . .Racing resumes Friday with first post 6:30 p.m. The race week includes Saturday’s simulcast of Justify in the Preakness Stakes and Sunday’s annual exotic animal races.
–##–