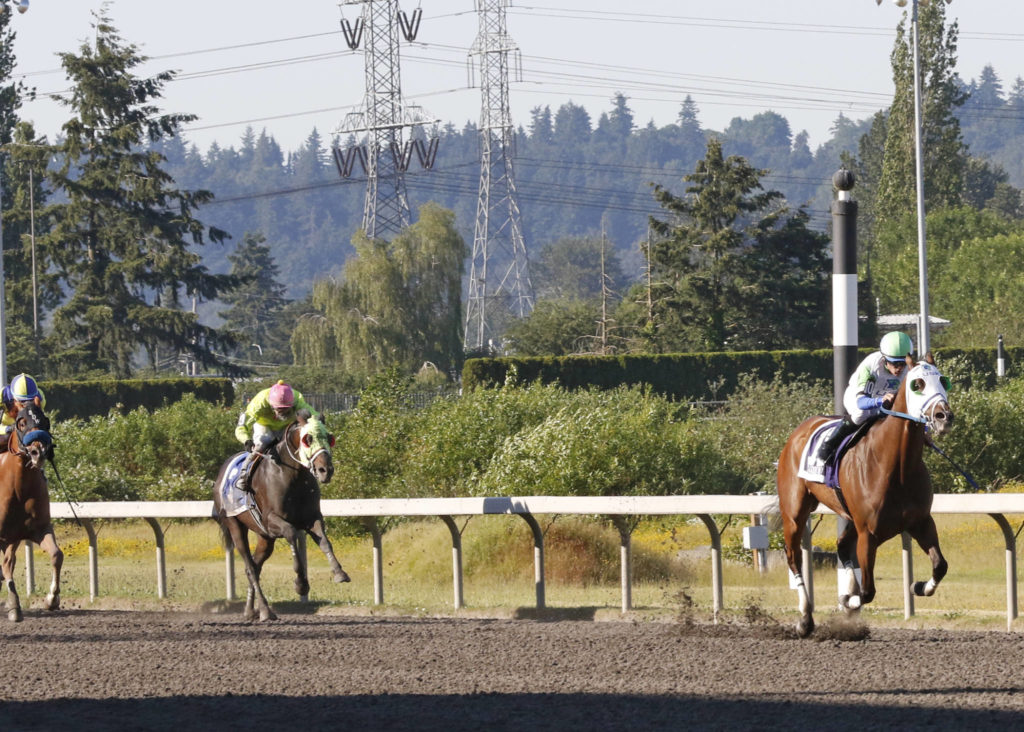 AUBURN, Wash. (June 26, 2022) – With a brazen display of speed Papa’s Golden Boy blitzed a star-studded field of older horses by 4 ¾ lengths Sunday while defending his title in the $50,000 Budweiser Stakes at Emerald Downs.

With Kevin Radke riding at 120 lbs, Papa’s Golden Boy zipped six furlongs in a meet fastest 1:07.76 and paid $7.60 as the second betting choice in a field of 10. Vince Gibson is the trainer for Lusk Racing of Puyallup, Wash.

For Papa’s Golden Boy, it was his third stakes win overall and almost identical to his 2021 Budweiser victory, in which he ran six furlongs in 1:07.71.

Breaking from the far outside in a 10-horse field, Papa’s Golden Boy sprinted clear at once and opened a three-length lead while setting blazing fractions of :21.29, and :43.32, entered the stretch with a commanding four-length lead on Top Executive and was unchallenged to the wire.

“I’ve ridden a lot of horses and (Papa’s Golden Boy) is one of the fastest, at least in the top two,” Radke said.

Top Executive, a slight favorite in the wagering over Papa’s Golden Boy, chased the winner from second place throughout the race and held second place. Ridden by Alex Cruz at high weight of 122 lbs, Top Executive returned $4 and $3.20. 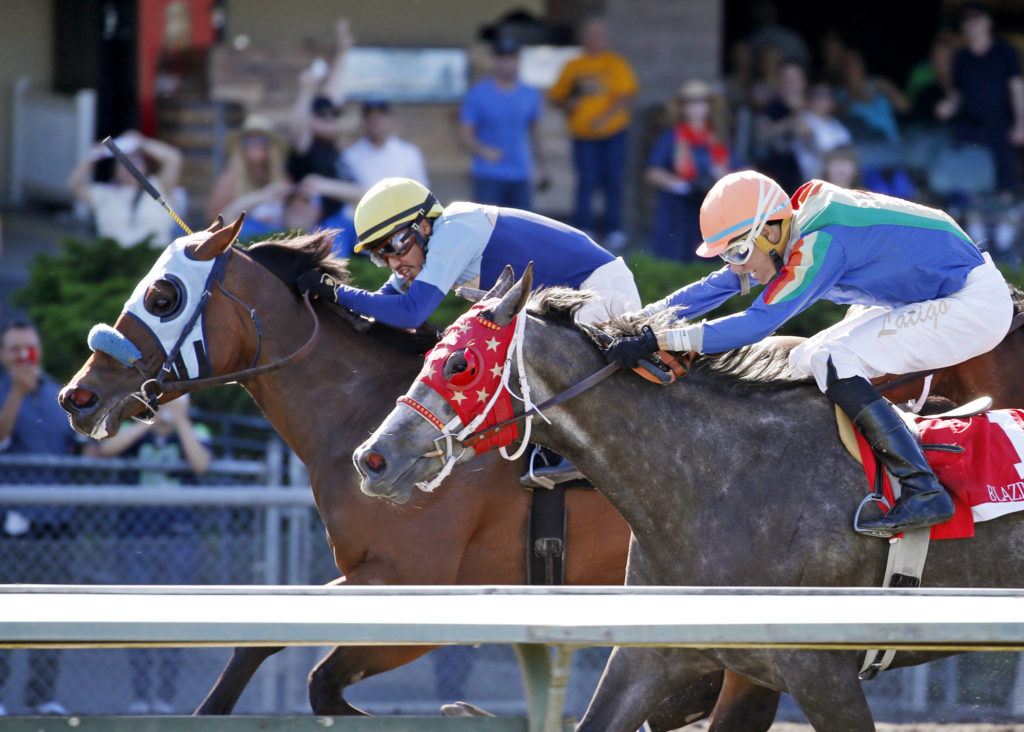 Maybe I Will (No. 6) edges Blazingbellablu

MAYBE I WILL PREVAILS IN THRILLING HASTINGS STAKES

In the $50,000 Hastings Stakes for older fillies and mares, California invader outfinished 2021 Washington Horse of the Year Blazingbellablu and scored a neck victory in 1:08.38 for six furlongs.

With Kevin Orozco riding at 120 lbs. for trainer Blaine Wright and owner/breeder Tom Bachman, Maybe I Will paid $12, $6, and $4.40 as fourth betting choice in a field of seven.

Maybe I Will pressed the pace outside of Ima Happy Cat and Daffodil Sweet through a half-mile in :44.21, took the lead into the lane, and then outfinished Blazingbellablu in an extended drive to the wire.

Blazingbellablu rallied into contention inside and just missed scoring a victory in her season debut for trainer/co-owner Charles Essex. Ridden by Alex Cruz at 119 lbs., Blazingbellablu paid $5.20 and $3.20.

Daffodil Sweet, the 9 to 5 favorite ridden by Juan Gutierrez at high weight of 123 lbs., was a half-length back in third and paid $2.60.

A 4-year-old California-bred filly by Will Take Charge, Maybe I Will earned $27,500 to boost her career total to $125,326. Her overall record is 4-1-1 from 12 starts including three wins over the synthetic Tapeta surface at Golden Gate Fields.

Wright already has three stakes wins this season and jumped into fourth place on the track’s all-time list with 49 stakes wins.

The $50,000 Washington State Legislators Stakes at 6 ½ furlongs is next for older fillies and mares on Sunday, July 24.

NOTES: Total mutuel handle was $2,122,361 on a 10-race card. . .Sunday’s 5th race—The Glen Todd Memorial Purse—honored the British Columbia racing titan who passed away in March at age 75. . .Kevin Radke rode three winners and Alex Cruz had two wins. . .Through 17 days of racing, Cruz leads Radke 31-27 atop the standings. . .Blaine Wright and Vince Gibson led trainers with two wins apiece. . .Jorge Rosales leads Wright 12-11 in the trainers’ standings. . .John Parker tops owners with 10 wins including a victory by Antecedence ($4.40) in race six. . .Heredia Boxer ($3) made it three for three at the meet with another gate to wire victory in race two for Rosales and owner Oscar Heredia. . .Harbor the Gold now has 71 stakes wins at Emerald Downs, easily the most by any sire in track history. Slewdledo is second with 27. . .The $0.20 Jackpot Pick 6 carryover is $32,366. . .Trainer Frank Lucarelli had a winner Sunday at Lone Star Park and is three wins away from 2,000. . .Next stakes action at Emerald Downs is for 2-year-olds with the $50,000 King County Express for colts & geldings and $50,000 Angie C Stakes for fillies, both Sunday, July 10. . .Live racing resumes Friday with a seven-race card at 7 p.m.