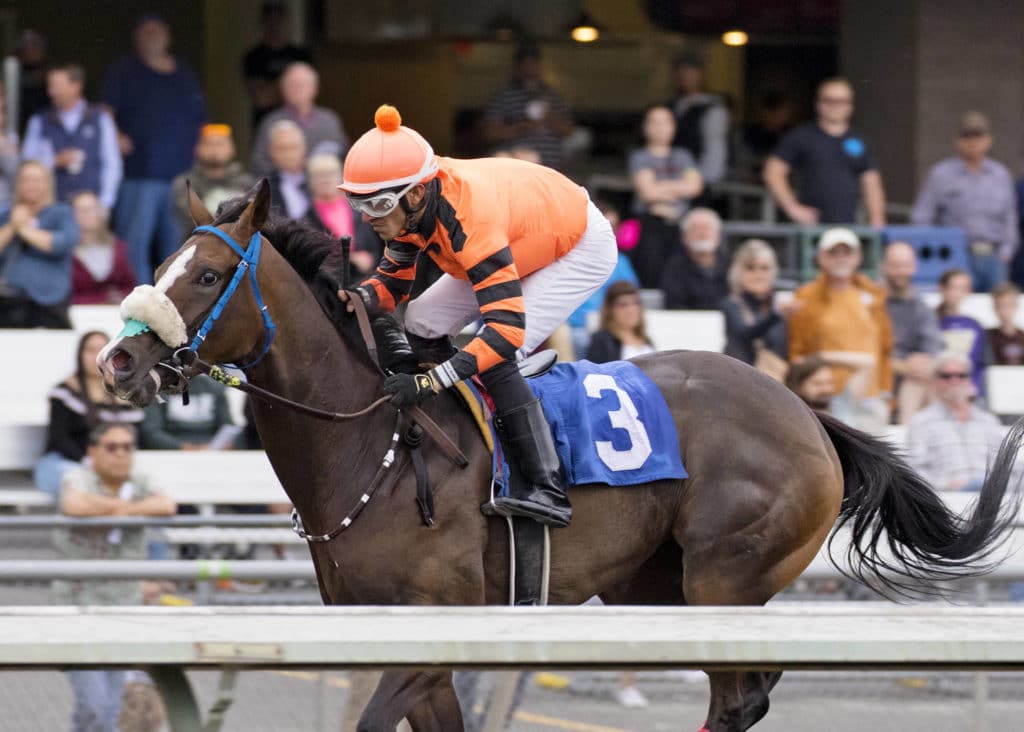 This Great Nation and Eddie Martinez

THIS GREAT NATION ALL THE WAY ON SUNDAY

AUBURN, Wash. (July 7, 2019) – This Great Nation held off long shot Pacific War and notched a 1 ¾-length victory Sunday in the $15,000 Muckleshoot Casino Purse for 3-year-olds and up at Emerald Downs.

A Washington-bred 3-year-old by Nationhood, This Great Nation produced one of the biggest upset in Emerald Downs’ stakes history last year with a 48 to 1 stunner in the WTBOA Lads Stakes. He had been winless in three starts this season, but ran an improved second last out, and carried his speed the entire way Sunday, setting splits of :21.69, :44.42 and :56.67 en route to the victory.

This Great Nation is 2-1-0 in eight starts overall with earnings of $40,601. Great Mom, dam of This Great Nation, has produced two foals and both are stakes winners. Older sister Squeeze Me (Papa Clem-Great Mom) won the 2017 Turf Paradise Open Spring Futurity in Arizona.

Pacific War, longest price on the board at 19-1, chased the winner gate to wire and held second place. Ridden by Jorge Carreno, the runner-up paid $10.60 and $3.80, while Sawyer’s Hat finished third and paid $2.60 to show. Lobaness and Battle Point Red completed the order of finish; Mojave and Diction were both scratched earlier in the day.

NOTES: Scott Stevens notched his first two wins at Emerald Downs, guiding Paynes Prairie ($9.60) and Devilish Diva ($13) to victories for trainer Paul Treasure in races three and four. Winner of over 4,900 races and voted the 2019 George Woolf Memorial Jockey Award, Scott is the older brother of Gary Stevens and rode several seasons at Longacres in the 1980s. . .Gary Wales rode two more winners Sunday—his 51st and 52nd of the meet—and extended his consecutive winning days streak to 23. . . Frank Lucarelli had a pair of wins Sunday and leads Blaine Wright 34-25 in the trainers’ standings. . .The track’s all-time leader in training wins, Lucarelli is within 22 wins of hitting the 1,000 mark at Emerald Downs. . .Sunday marked the midway point of the 67-day meeting. . .Live racing resumes Friday with a seven-race card at 6:30 p.m.
–##–