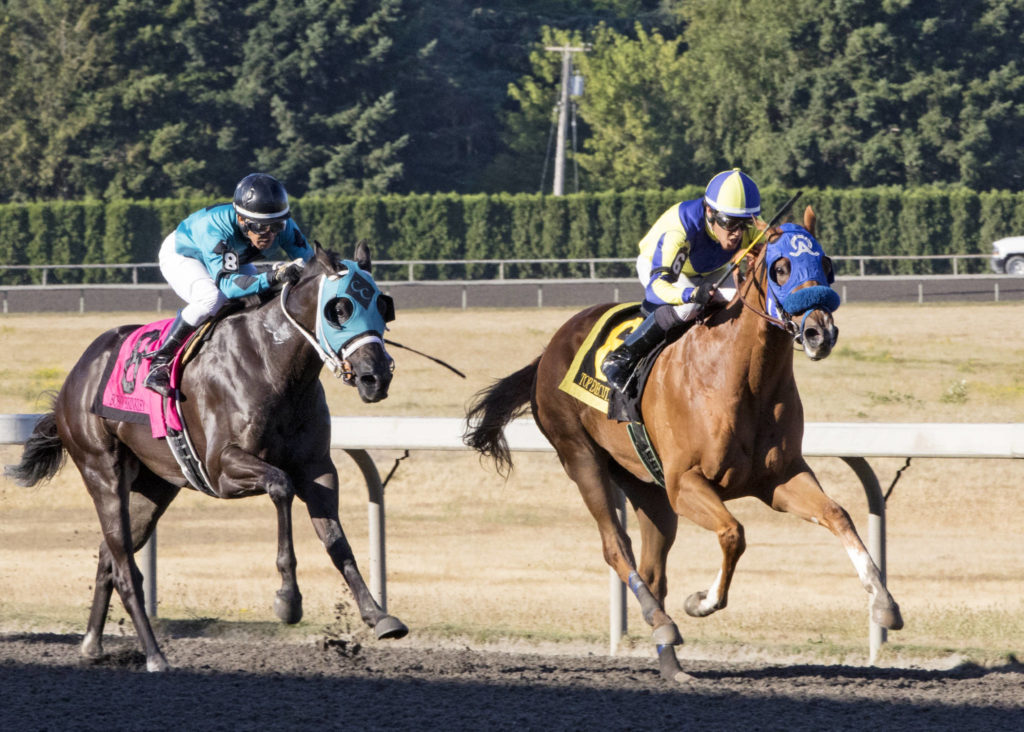 TOP EXECUTIVE OVER BOBBY BRINKLEY IN A THRILLER

With Kevin Orozco riding at 123 lbs, Top Executive ran 6 ½ furlongs in 1:16.62 and paid $12.80 as fourth choice in the wagering. Blaine Wright is the winning trainer for owners Gail and Gerald Schneider and John and Janene Maryanski.

Top Executive has swept the first two stakes for 3-year-olds—Auburn and Irish Day—and has three stakes wins overall at Emerald Downs. A Kentucky-bred by Street Boss, Top Executive is 4-0-0 in seven career starts with earnings of $97,698.

In Sunday’s race, Top Executive overhauled Dutton into the stretch and then braced for a fresh challenge from Bobby Brinkley, a Texas shipper from the barn of Frank Lucarelli. The 3-year-olds hooked into a neck and neck battle before Top Executive edged clear for the victory.

“He got in front a little early today, and then he waits on horses,” Orozco said. “But he’s a good horse and a tough horse.”

Bobby Brinkley, ridden by Leslie Mawing at 121 lbs, was clearly second best, while Naval Escort, ridden by Julien Couton at 119 lbs, was four lengths back in third place. Bobby Brinkley earned $10,000 for second and is 1-3-2 in eight starts this year with over $68,000 in earnings. 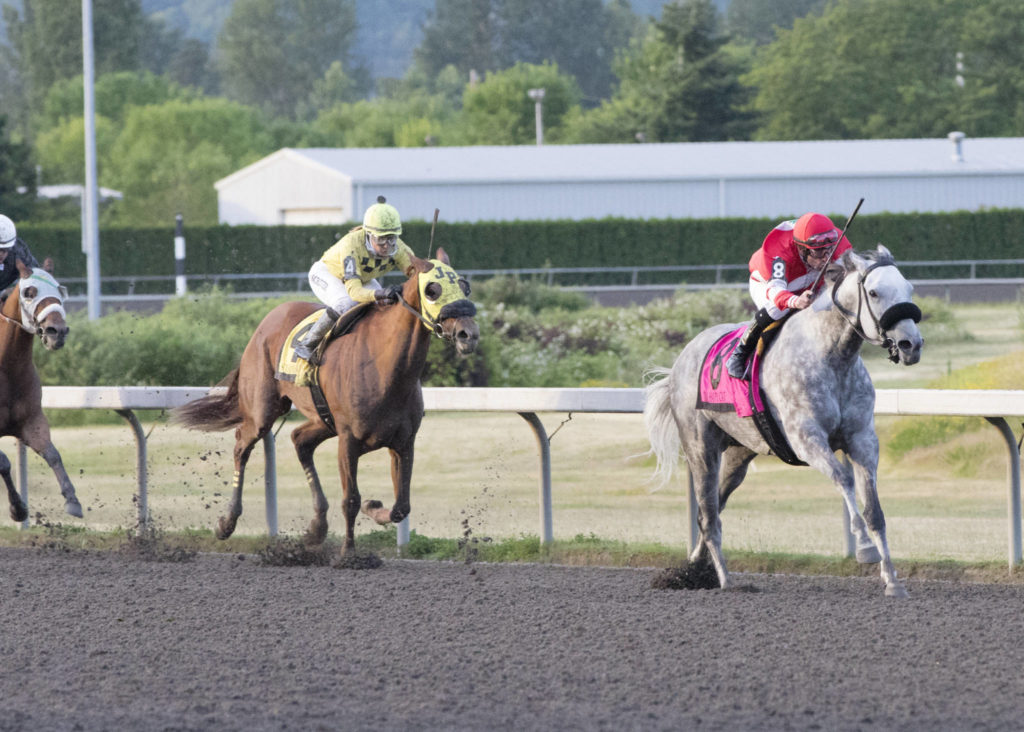 Continuing her ascendancy in the sophomore filly ranks, Blazingbellablu powered to the lead into the stretch and drew off for a 2 ¼-length victory over Broad Approval in the $50,000 Kent Stakes for 3-year-old fillies.

With Alex Cruz riding at 120 lbs., Blazingbellablu ran 6 ½ furlongs in 1:17.34 and paid $6 as the betting favorite. Charles Essex is the winning trainer and co-owner with Petra Lewin of Centralia, Wash.

Blazingbellablu earned $27,500 to increase her career total to $66,958. Her overall mark is 3-2-0 from six starts, including three straight victories at Emerald Downs.

In the Kent, Blazingbellablu raced slightly off the pace as Coastal Son set fractions of :22.39 and :45.26 for the quarter and half-mile. The winner advanced three deep on the turn, overtook Coastal Son and Zippin Sevenz into the lane, and proved clearly best through the stretch.

Cruz, who rode Ms Lynn to a 17 to 1 upset in the Seattle Stakes last month, was faced with a difficult choice on which filly to ride in the Kent.

“It was a tough decision to make, but we made the right decision in the end,”
Cruz said.

The 3-year-olds reconvene at Emerald Downs on Sunday, August 29, for the $50,000 Muckleshoot Derby for colts and geldings and $50,000 Washington Oaks for fillies. 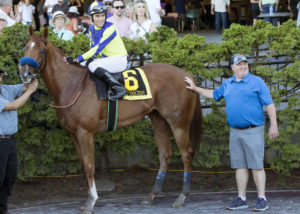 NOTES: Total mutuel handle was $1,732,609. . .Blaine Wright leads trainers with three stakes wins this season and is sixth all-time with 45 stakes victories at Emerald Downs. . .Wright celebrated his 47th birthday Sunday. . .With a gate to wire victory in Sunday’s first race, Bella’s Back ($3) became the first four-time winner at the meet. A 7-year-old Hold Me Back mare, Bella’s Back ran six furlongs in 1:10.93 under regular rider Julien Couton for trainer Ari Herbertson and owner Scott Herbertson. . .Couton and Herbertson also clicked with Adens Dream ($5) in race six and are a combined 11 for 20 at the meet. . .Couton and Alex Cruz are now tied for first at 42 wins apiece, with Juan Gutierrez third with 39. . .Trainer Charles Essex also had two wins Sunday. . .Couton has 992 career wins. . . Leslie Mawing notched his first victory since his return to Emerald Downs earlier in the week, scoring aboard Southern Venture ($6.40) in the nightcap for Frank Lucarelli and owners Dennis Snowden, Dan Minardo and Russ Nakagawa. It was Emerald Downs victory No. 762 for Mawing, fourth on the track’s all-time list. . .The $0.20 Jackpot Pick Six carryover is up to $7,923. . .Live racing resumes Thursday at 6 p.m.
–##–