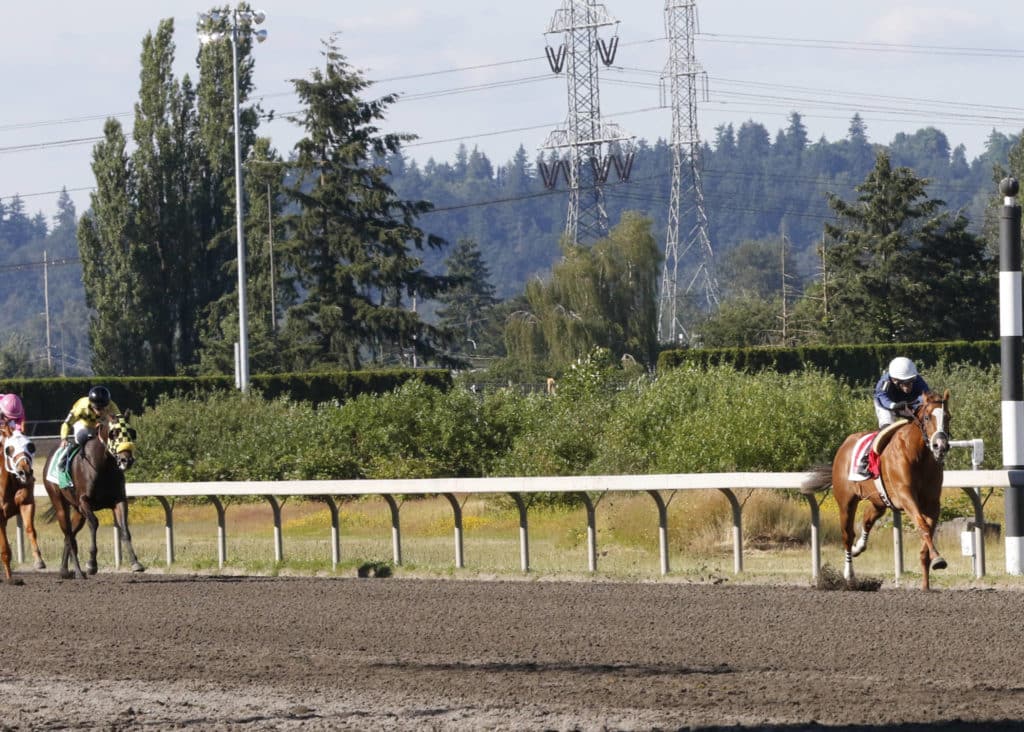 Runnin Out of Days romps in the $50,000 King County Express

RUNNIN OUT OF DAYS SCORES IN KING COUNTY EXPRESS

AUBURN, Wash. (July 10, 2022) – Runnin Out of Days delivered a dazzling debut Sunday at Emerald Downs, romping to a front-running 10 ¼ length victory in the $50,000 King County Express for 2-year-old colts and geldings.

With Juan Gutierrez riding his second stakes winner Sunday, Runnin Out of Days ran 5 ½ furlongs in 1:03.32 and paid $6 as second choice in the wagering. Blaine Wright is the winning trainer and co-owner with Abel Pulver and Shawn Sudo.

Breaking alertly from the inside post in a field of eight, Runnin Out of Days sprinted to the lead on the backstretch, set fractions of :21.62 and :45.00, opened a four-length lead into the stretch, and drew off to win with total authority.

“He was in the gate a long time, but it didn’t bother him at all,” Gutierrez said. “He’s a very good horse.”

Gutierrez also won Sunday’s $50,000 Angie C Stakes on Miss Dynamic, and with the stakes sweep vaulted into second place all-time with 73 stakes wins at Emerald Downs, one ahead of Ricky Frazier.

Wright, meanwhile, has saddled four of the first six stakes winners at the meet and is tied with the late Jim Penney for No. 3 all-time with 50 stakes wins at Emerald Downs.

A chestnut Washington-bred gelding by Abraaj out of the Atta Boy Roy mare Annie Over, Runnin Out of Days sold for $14,000 at the 2021 Washington Yearling Sale and earned $27,500 for Sunday’s victory.

Deshambeau, the 6 to 5 favorite ridden by Kevin Orozco, held second, while It’s Turbo, with Leslie Mawing riding, finished third. The runner-up and third-place finisher are both trained by Frank Lucarelli, who scored his 2,000th career victory earlier Sunday. 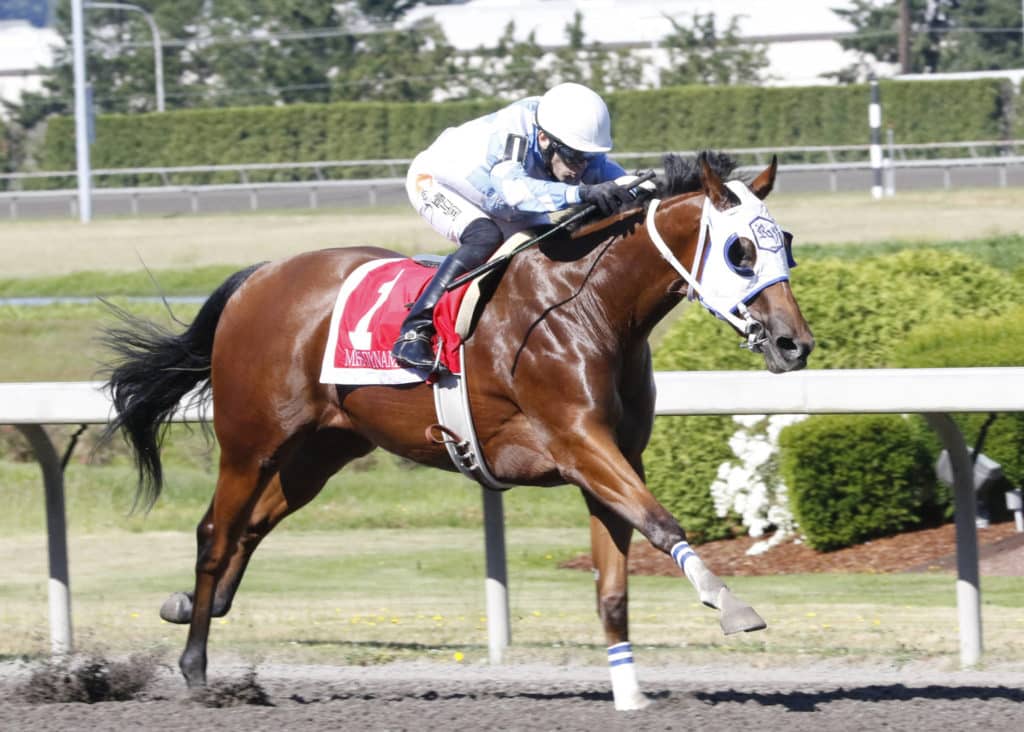 MISS DYNAMIC ALL THE WAY IN ANGIE C STAKES

Returning just eight days after a smashing debut victory, Miss Dynamic lived up to her name once again, rolling to a dominating 5 ½-length victory in the $60,000 Angie C Stakes for 2-year-old fillies.

Breaking sharply from the No. 1 post, Miss Dynamic took command immediately, setting fractions of :21.46, :44.53, and :57.19, then repelling Aloha Breeze in the stretch for the victory.

A $5,000 supplemental nomination, Miss Dynamic earned $33,000 to up her two-race total to $40,975. The winner is a Washington-bred bay by Dynamic Impact out of the Harbor the Gold mare Miss Salome.

Aloha Breeze, the even-money favorite ridden by Eddie Martinez at 122 lbs, chased the winner gamely from flag-fall to finish, but settled for second place. 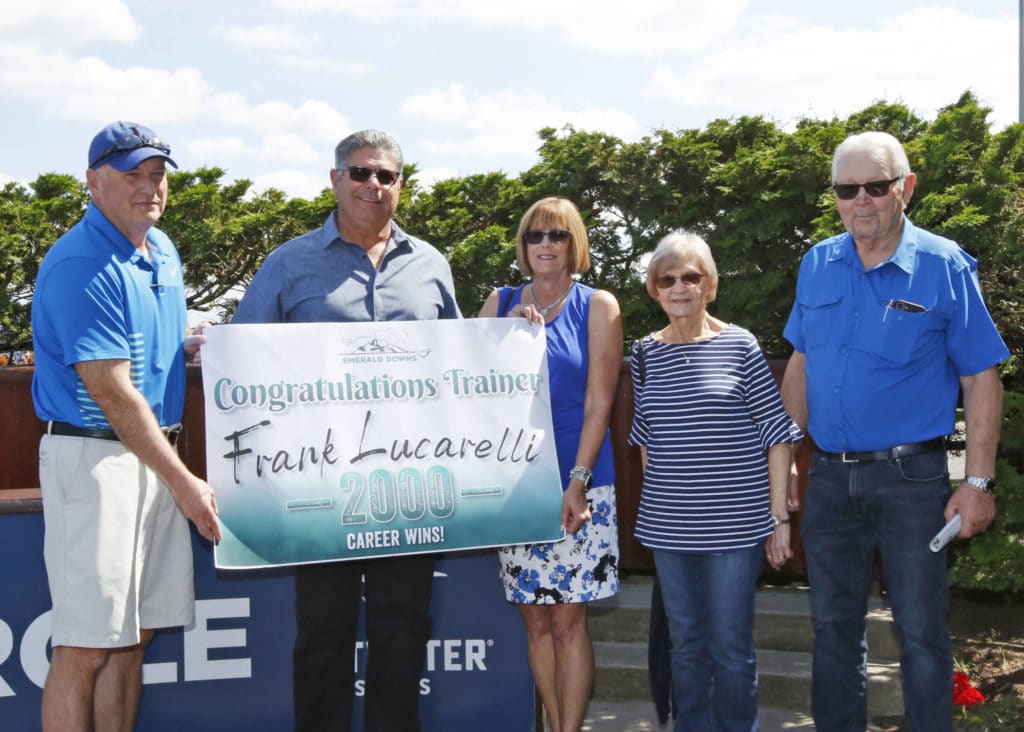 Lucarelli, 65, notched his first career victory at Longacres on Sept. 20, 1979, beginning one of the most successful training careers in Washington history. At Emerald Downs, Lucarelli ranks No. 1 in wins, 1,105, and earnings, $12,363,497, and has amassed seven ’ training titles including a record 81 wins in 2019. He also ranks second with 55 stakes wins.

Lucarelli also won Sunday’s fifth race at Lone Star—career win 2,001—as Sargent Kline ($10) prevailed in a $40,000 maiden claimer for 3-year-olds and up. And he later scored No. 2,002, saddling Ms Parkside to a 2 ¾-length victory in the fifth race at Emerald Downs.

Lucarelli’s was honored in the winner’s circle after Sunday’s third race, surrounded by his wife and longtime owners Roy and Ellie Schaefer and Darrin Paul.

Lucarelli currently has training operations in Washington and Texas, and both River Kat and Sargent Kline began their racing careers at Emerald Downs in 2021.

NOTES: Total mutuel handle was $2,268,725 on a 10-race card. . . Slew’s Tiz Whiz ($5.60) captured the $25,000 allowance/optional claiming sub-feature, running six furlongs in a brisk 1:08.52 for his fourth win in 11 starts. . .Nicolle Disdier rode her first Emerald Downs’ winner on Rousing Rubble ($46.80) in Sunday’s 10th race. . .Juan Gutierrez rode three winners including a sweep of the stakes races. . .Alex Cruz rode two winners and finished the week with a 44-35 lead on Kevin Radke in the jockeys’ standings, with Gutierrez third with 34 wins. . .Candi Cryderman was the lone trainer with two wins and is tied for third with Frank Lucarelli at 13 wins apiece. . .John Parker had two wins and opened a 13-5 lead over Lusk Racing in the owners’ race. . .Live racing resumes Friday with first post 7 p.m.