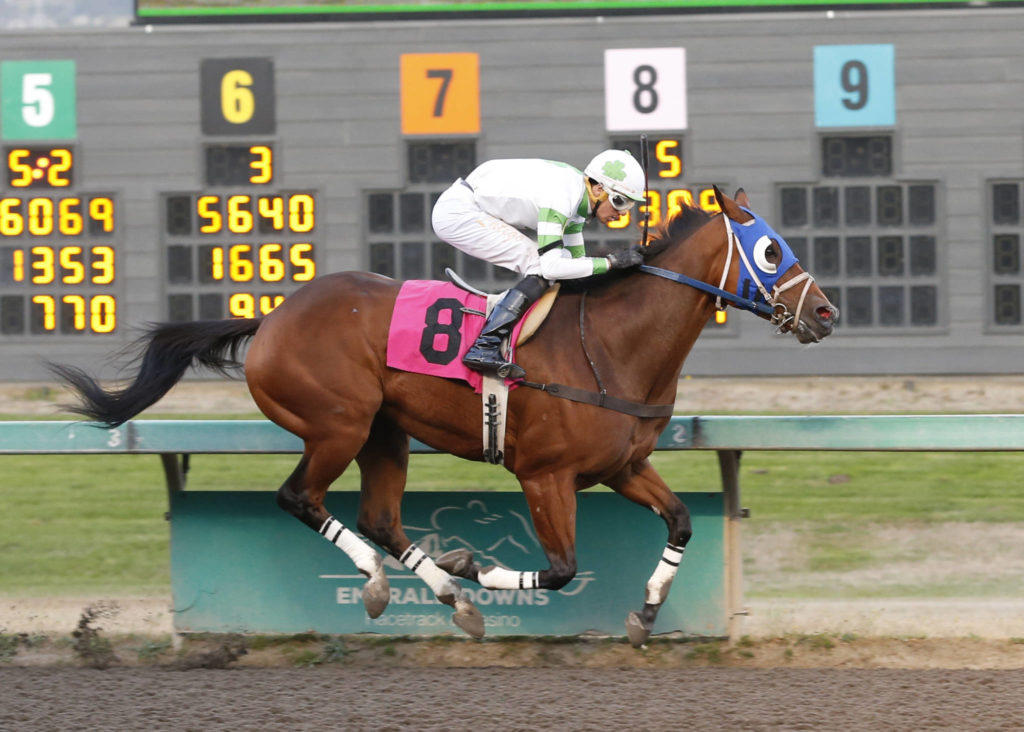 AUBURN, Wash. (Sept. 17, 2022) – Cody’s Choice shook off Feather In the Wind into the lane and held off Gold Crusher late for a 1 ¼-length victory in the $22,000 Muckleshoot Casino Purse for 3-year-olds and up Saturday at Emerald Downs.

Gold Crusher, the 5-to-2 betting favorite, challenged the winner from mid-stretch to the wire but came up short in his season debut. Ridden by Kevin Orozco, the 2020 Muckleshoot Derby winner paid $4.80 and $3.60.

Muncey, ridden by Jennifer Whitaker, rallied from far back to finish third and paid $3.80, while Stand To, A View From Above, Coastal Jazz, and Feather In the Wind rounded out the order of finish. El Maestro was scratched earlier in the day.

It was a big afternoon for the Halletts, co-owners of Wine At Nine, the 10-year-old gelding that scored his 19th Emerald Downs’ victory earlier on the card.

NOTES: Total mutuel handle was $1,318,061 on an 11-race card. . .After Saturday’s eighth race, jockey Kevin Radke was presented the 2022 Lindy Award and trainer Debbie Peery received the 2022 Martin Durkan Award. The Lindy Award is voted by jockeys and based on accomplishment and sportsmanship throughout the meeting, while the Durkan is selected by Director of Racing Bret Anderson and signifies leadership, cooperation, sportsmanship, and excellence on and off the track. Congratulations Kevin and Debbie!. . .10-year-old Wine At Nine ($11.80) bagged his 19th Emerald Downs victory with a late rush in race eight under Leslie Mawing for Vince Gibson and owners Two Putts for the Win and Gary and Maureen Hallett. Wine At Nine trails only Mike Man’s Gold (26 wins) and West Seattle Boy on the track’s all-time wins list. Wine At Nine won his first race at Emerald Downs on April 19, 2015, and now has six seasons with multiple wins. . .Another veteran gelding, 10-year-old Pistol Power ($12), scored his 10th career victory with a hard-fought score over $15,000 claimers in race nine. . .On the 40th anniversary of his world record performance at Longacres—5 furlongs in :55 1/5—the late great Chinook Pass was honored with the Chinook Pass World Record Purse in Saturday’s seventh race at Emerald Downs. . .Jake Samuels led jockeys with three wins Saturday, while Radke, Alex Cruz, and Leslie Mawing rode two winners each. . .Cruz officially clinched his third straight Emerald Downs riding title and carries a 90-74 lead over Radke into closing day. . .Vince Gibson was the lone trainer with two wins. . .With a 36-29 lead over Frank Lucarelli and Blaine Wright, Jorge Rosales clinched his first Emerald Downs’ training title. . .Owner/trainer Marvin Abrahamson scored his first win of the meet, Blowing Bayou ($12.20) doing the honors with a front-running score in race three. . .The $0.50 Pick 5, fortified with a $9,079 carryover, paid $5,104.35. . .Live racing continues Sunday with a closing day stakes triple-header including the $70,000 Joe Gottstein Futurity for 2-year-olds, and Longacres Mile winner Slew’s Tiz Whiz in the $50,000 Muckleshoot Tribal Classic for 3-year-olds and up. First post 2:15 p.m.