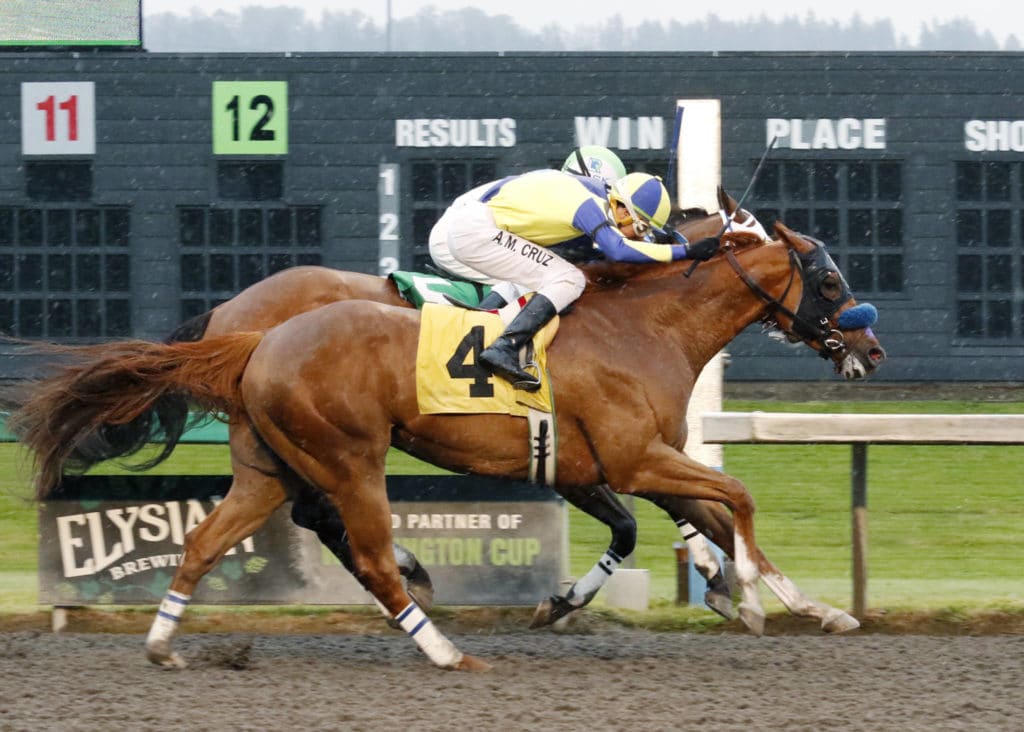 AUBURN, Wash. (May 28, 2022) – Top Executive nailed Papa’s Golden Boy in the final stride for a head victory in Saturday’s $28,500 Muckleshoot Casino Purse for 3-year-olds and up at Emerald Downs.

With two-time defending Emerald Downs riding champion Alex Cruz aboard, Top Executive ran 5 ½ furlongs in 1:01.60 and paid $8.60 as third choice in a field of six. Blaine Wright is the winning trainer for owners John and Janene Maryanski and Riverbend Stable.

Top Executive, the 2021 Horse of the Meeting after a three-race sweep of the 3-year-old colts and geldings division, resumed his winning ways with a scintillating stretch run, reeling in a loose on the lead Papa’s Golden Boy for the victory.

“He had a good start, but we lost a little ground on the turn,” Cruz said. “But I always knew I had a lot of horse. I kept him busy, and he responded.”

The 2 to 1 second choice ridden by Kevin Radke, Papa’s Golden Boy once again exhibited his unmatchable speed, carving blistering fractions of :21.41, :43.44, and :55.16, and was still two lengths clear past mid-stretch. Top Executive was relentless, however, surging late under Cruz for the victory.

A 4-year-old Kentucky-bred by Street Boss, Top Executive is five for seven at Emerald Downs, including four stakes victories. His overall mark is 6-0-0 from 10 starts with $141,3323 in earnings, including $15,675 for Saturday’s triumph.

Windribbon, the even-money favorite, finished third in his 2022 debut, 2 ½-lengths back of Papa’s Golden Boy, while Five Star General, Slew’s Tiz Whiz, and Dutton completed the order of finish.