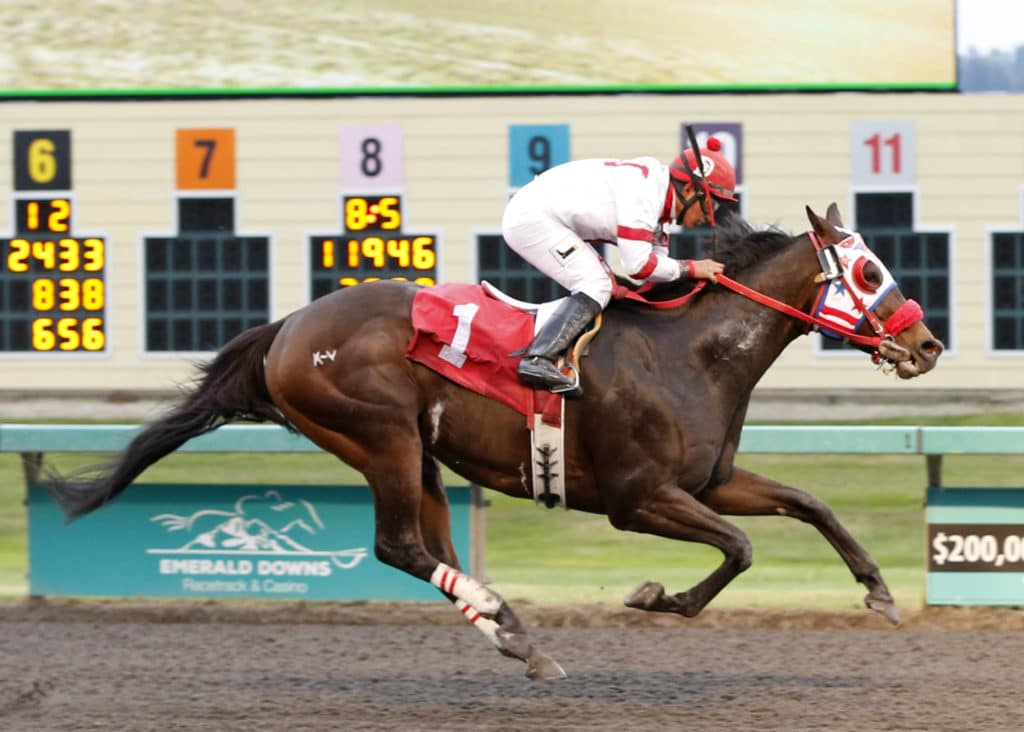 A 5-year-old Florida-bred by Twirling Candy, Iron Rob tipped his hand in his Emerald Downs debut last month, finishing with a fast closing second to Daytona Beach at 5 ½ furlongs.

Saturday, Iron Rob took advantage of a speed duel between Daytona Beach and Twirling Cinnamon—who sizzled through fractions of :21.82 and :44.22—rallied four wide into the lane, gained the lead inside the eighth pole and quickly drew off.

Mixo, with Kevin Orozco riding, rallied strongly for second and paid $9 and $4.80, while Royal Privacy, the 8-5 favorite ridden by Rocco Bowen, finished third and paid $3.

Twirling Cinnamon tired from his early efforts to finish fourth, and was followed by Thorn Legacy, There’s No Doubt and Daytona Beach. Alley Boss was scratched earlier in the day.

NOTES: Rocco Bowen and Kevin Orozco dominated action with three riding wins apiece on the eight-race card. Bowen tops the standings with 19 wins and is 15 wins shy of 500 at Emerald Downs. . .Trainer H.R. Pat Mullens—92 years young—is off to a great start with three wins in seven starts, including a second straight victory by Ryan Walt ($16.40) in the Saturday nightcap. . .Trainer Frank Lucarelli is continues his march toward becoming the first trainer with $10 million in purse earnings at Emerald Downs. Including a victory by Curious Rumor ($4.60) in the Saturday opener and a third-place finish by Little Joker in race two, Lucarelli upped his total to $9,955,972. . .Lucarelli is No. 2 all-time with 914 wins at Emerald Downs. . .Racing continues Sunday with the $50,000 Seattle Stakes for 3-year-old fillies at six furlongs. First post is 2 p.m.