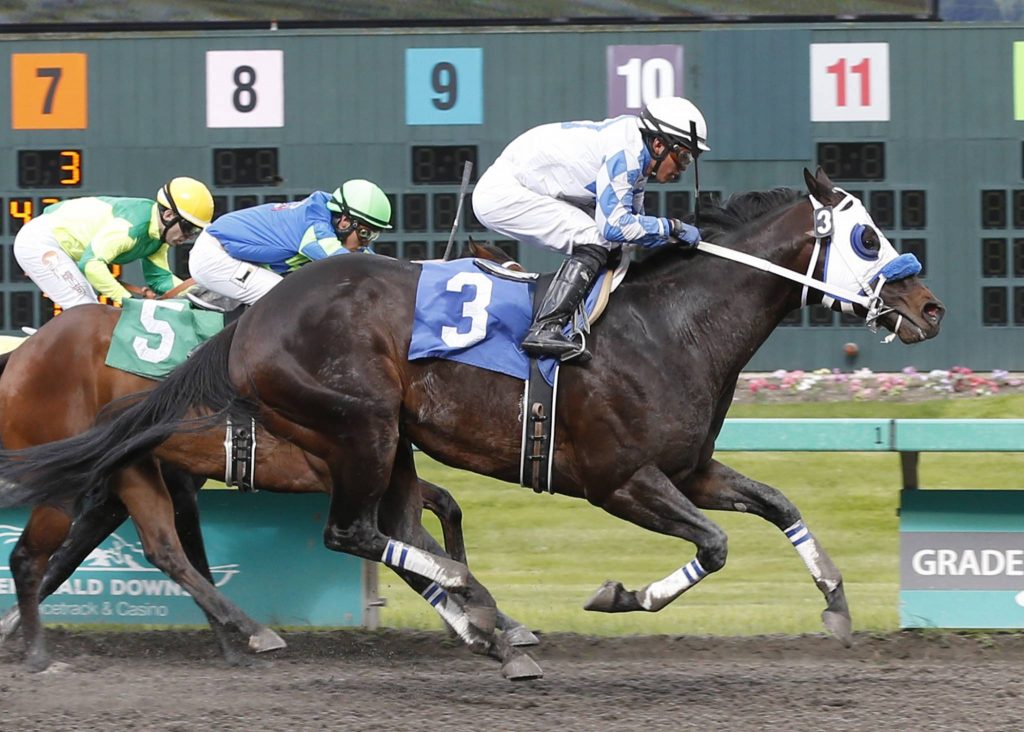 AUBURN, Wash. (May 13, 2017) – Party Pooper overcame a tardy break and out-finished Swingshift Deputy and Grand Palais and scored a three-quarter-length victory Saturday in the $15,600 John Parker Racing Purse for 3-year-olds and up at Emerald Downs.

An extremely consistent 5-year-old, Party Pooper is 4-3-3 in 10 starts at Emerald Downs and has won three straight races dating to last year.

Trained by Rigoberto Velasquez and owned by Matt Hughes, Party Pooper was claimed for $20,000 Saturday and will now race for trainer Tim McCanna and Royal Victory Thoroughbreds. A Kentucky-bred by Desert Party, Party Pooper is 5-6-4 in 16 starts lifetime with earnings of $90,962.

“We has such a good ride with this horse,” Hughes said. “Leonel Camacho-Flores and Jesse Velasquez did an awesome job, couldn’t have asked for anything better. I wish the new owner good luck.”

Swingshift Deputy, ridden by apprentice Kevin Orozco, edged Grand Palais by a half-length for second and paid $4 and $2.40, and Grand Palais, ridden by Juan Gutierrez, paid $2.60.

Blue Law and He’s Cagey completed the order of finish; Eddington’s Star and Delineator Express were scratched earlier in the day. 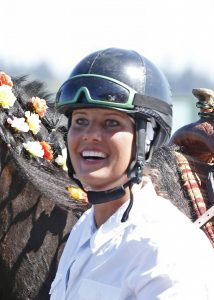 NOTES: Highly-touted first-time starter Daddyalwayssays ($4.60) caught Racy Rascal in the final stride and captured the $18,500 maiden special weight for 3-year-old fillies in 1:03.96 for 5 ½ furlongs on a wet-fast track. A $52,000 Sky Mesa filly, Daddyalwayssays is owned by Where We At and trained by Kay Cooper. . .Howard Belvoir celebrated his 73rd birthday in style, winning the Howard Belvoir Birthday Purse with Vistarella ($6.60) in race five. . . Apprentice Kevin Orozco had his streak of eight straight days with at least one victory snapped Saturday. . .Rocco Bowen, Eswan Flores and Leonel Camacho-Flores rode two winners each on the eight-race card. Through 15 days of racing, Bowen leads Orozco 23-16 in the jockeys’ standings. . .Roddina Barrett was the lone trainer with two wins Saturday including a breakthrough victory by Wicked Laugh ($3.60) in the nightcap. A 4-year-old Demon Warlock filly, Wicked Laugh broke her maiden in start No. 24, but the consistent filly had racked up 10 wins and five thirds before Saturday’s maiden score. . .Trainer Joe Toye wasted no time picking up his first win of the meet as Angel de Amour ($13.60) rolled to a four-length victory in Saturday’s second race. It was the first start of the season for Toye, who had 16 wins at the Turf Paradise meet that concluded last Sunday. . .Veteran trainer Michael Bullene notched his first win of the meet as Sunshine Serenade ($27.20) raced to an easy victory under Natasha Coddington in the Saturday opener. . .At Hastings Racecourse, 7-year-old Dear Lilly improved to 14-for-25 lifetime with a one-length victory in the $50,000 Vancouver Sun Stakes for older fillies and mares. . .Live racing continues Sunday with the $50,000 Auburn Stakes for 3-year-old colts and geldings. First post on Mother’s Day is 2 p.m.
–##–