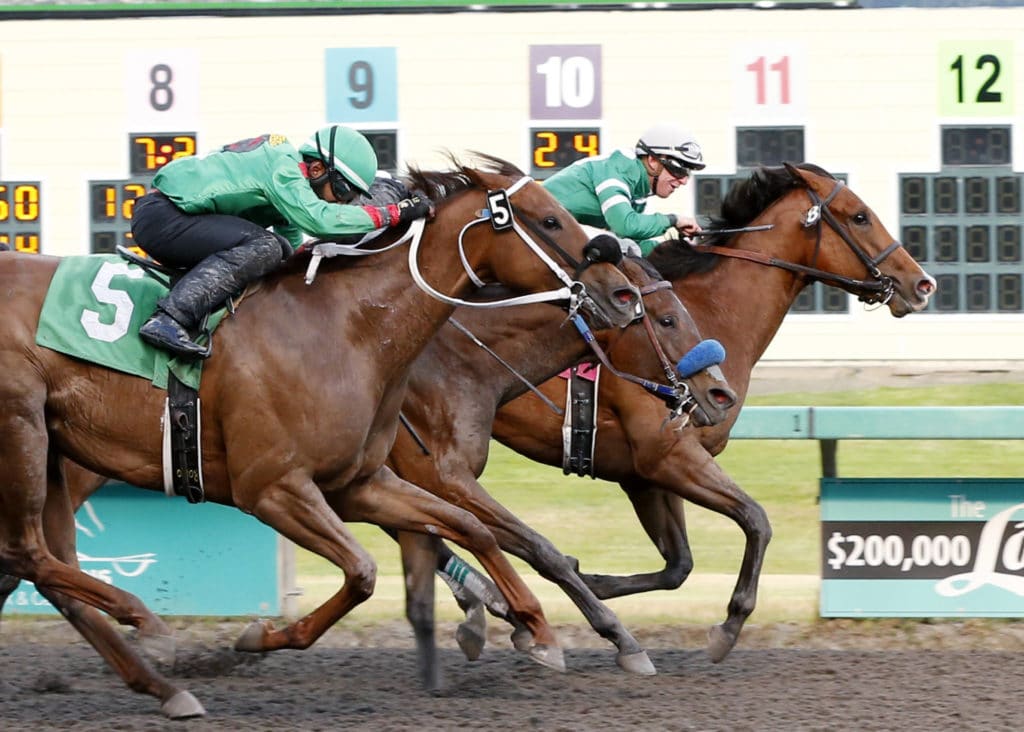 Racy Rascal (rail) holds off Jerre to Carrie (No. 5) and Fly Far Away (between)

AUBURN, Wash. (June 9, 2018) – Racy Rascal held off Jerre to Carrie and Fly Far Away for a head victory in the $18,500 feature race for older fillies and mares Saturday at Emerald Downs.

Ridden by Julien Couton, Racy Rascal covered six furlongs on 1:09.83 and paid $9.20, $4.40 and $3. Chris Stenslie is the winning trainer for owner/breeder Griffin Place of Buckley, Wash.

A 4-year-old Washington-bred by Into Mischief-Campanita, Racy Rascal has improved in all three starts this season, including a recent runner-up finish to razor-sharp stablemate No Talking Back in a 6 ½-furlong allowance race. Saturday, she settled slightly off the pace as Targa and Red Hot Bubblegum set fractions of :21.92 and :44.55 for the quarter-mile and half-mile.

Launching a three-wide bid into the lane, Racy Rascal collared the leaders at the furlong marker and staved off Jerre to Carrie and Fly Far Away for the victory. Racy Rascal is 2-2-2 from seven starts with earnings of $33,500.

Jerre to Carrie, the 2-1 favorite, rallied in mid-track for second place and paid $3.80 and $2.60, while Fly Far Away was another head back in third and paid $2.80. Afleet Hope, Sassy Debs Firefly, Targa, Risque’sLegacy and Red Hot Bubblegum completed the order of finish.

B C Z Middleton, the 5-2 morning line favorite, and Arabesque were scratched earlier in the day. 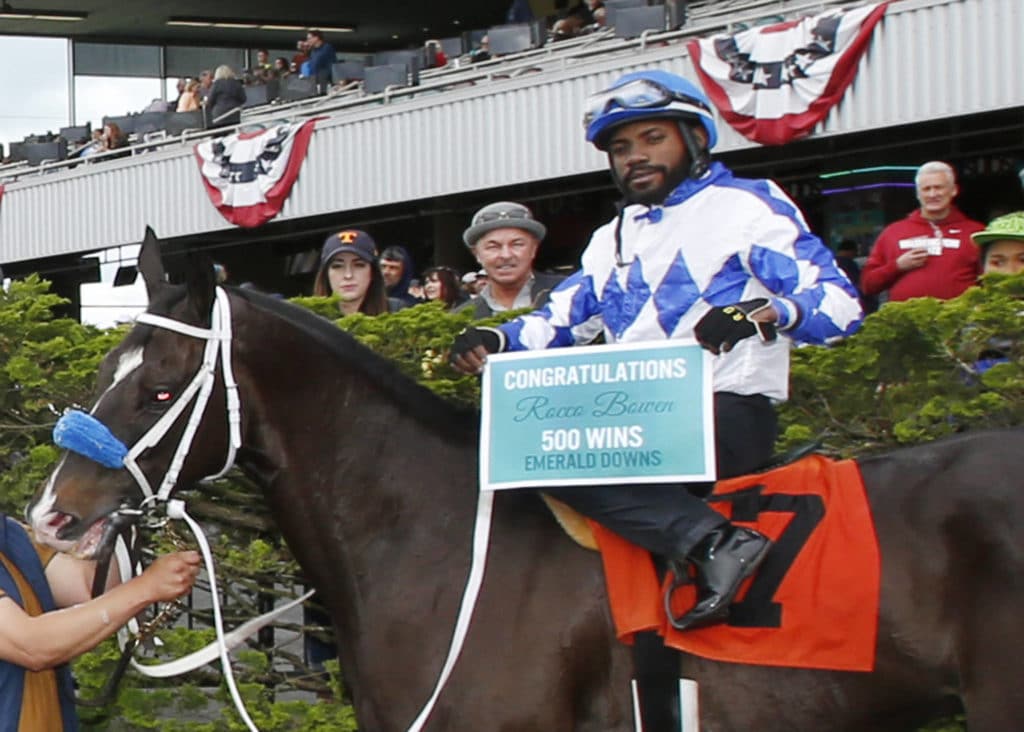 Rocco Bowen became the eighth jockey with 500 wins at Emerald Downs with a gate-to-wire victory on Outdidya ($7.80) in Saturday’s fifth race.

The two time defending riding champion, Bowen is 501 for 2,640 at Emerald Downs, and his 26 stakes wins are tied for No. 6 in track history.

Bowen, a 29-year-old native of Barbados, began riding at Emerald Downs six years ago, and has 891 wins overall. He’s also ridden in Vancouver, Winnipeg, Portland and the Bay Area.

Bowen added a second victory Saturday aboard Briana Jean ($4.20) in race six and tied Ben Russell for No. 7 all-time at Emerald Downs.

Bowen has 35 wins in 18 days this season and owns a 14-win lead in the jockeys’ standings.

NOTES: 2017 Gottstein Futurity runner-up Trump Itz ($4) returned from an 8 ½-month layoff to win Saturday’s $18,500 co-feature for 3-year-olds. With Couton aboard for trainer Blaine Wright and owner John and Janene Maryanski, Trump Itz covered six furlongs in 1:09.94, holding off Wheel Rally and Hey Sequoia for the victory. The winner is a dark bay or brown gelding by Coast Guard-Knight Weave. . .In addition to winning both feature races, Couton rode Will Not ($3.60) to a narrow victory in race eight for his first three-win day of the season. . .Bob Meeking, trainer of Will Not, celebrated his 90th birthday Wednesday. . .Live racing continues Sunday with the $50,000 Kent Stakes for 3-year-old fillies at 6 ½ furlongs, along with the final day of Indian Relay Racing featuring the Muckleshoot Gold Cup. First post is 2 p.m.