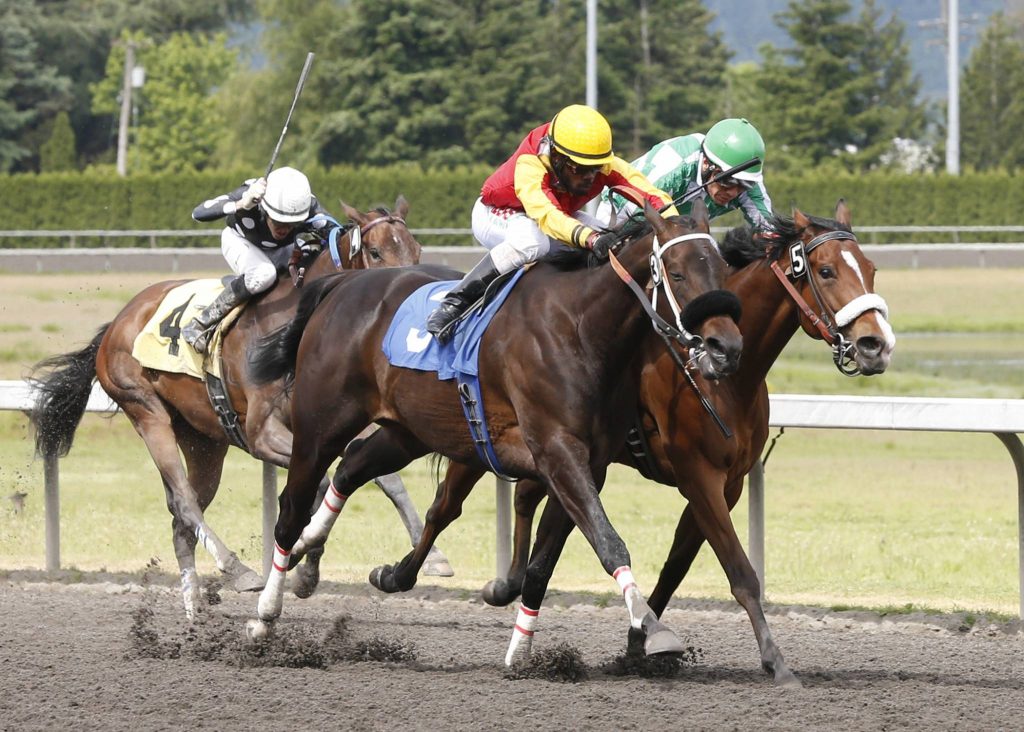 AUBURN, Wash. (June 3, 2017) – Exit Sixty Slew held off a resilient McDove and notched a head victory Saturday in the $15,600 Stella Artois Purse for older fillies and mares at Emerald Downs.

With the victory, Exit Sixty Slew became the first horse this season to win three races but it wasn’t easy, as Exit Sixty Slew and McDove raced head-and-head the length of the stretch in a furious driving finish.

Ridden by Rocco Bowen, Exit Sixty Slew ran one mile in 1:36.66 and paid $3.80, $2.40 and $2.10. Charles Essex is the winning trainer for owners Joe Crawford and Jingyl Zhuang, however Below The Rim Stables and Mediocre Racing claimed Exit Sixty Slew for $20,000 Saturday, with Blaine Wright the new trainer.

McDove, ridden by Javier Matias, took the early lead, setting fractions of :24.31, :47.76 and 1:11.55, but Exit Sixty Slew was in a stalking position and moved up outside to challenge midway on the turn for home. From there it was a virtual match race, the 4-year-old fillies alternated back and forth through the lane with Exit Sixty Slew winning the head-bob.

Even though she missed the victory, the 200-member Emerald Racing Club rewarded McDove with a big round of applause for an outstanding effort in defeat. Second choice at 5-2, McDove paid $3 and $2.20.

First Heritage was three lengths back in third and paid $2.40 to show while Diamond Cut and Cup of Soup completed the order of finish. 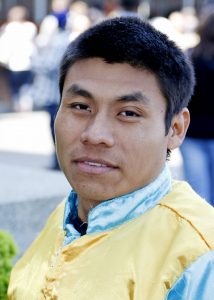 NOTES: Tondasarh ($103) pulled off the meet’s biggest upset to date in the Saturday nightcap, racing gate-to-wire under Francisco Diaz-Lopez at odds of 50-to-1. A 6-year-old Polish Miner mare trained by Brian Lusk, Tondasarh had finished out of the money in seven previous starts. . .The mammoth upset triggered carryovers of $21,714 in Sunday’s $0.20 Pick 7 and $5,884 in the $0.50 Pick 5. . .Making Fire at $153 on May 31, 2015 is the biggest $2 win payout in track history. . .Rocco Bowen was back in the groove Saturday with three wins on the nine-race card, extending his lead to 43-24 over apprentice Kevin Orozco atop the riders’ standings. . .Bowen already has eight three-win days this season. . .The husband and wife team of trainer Kurt Calton and owner Janis Calton improved to 4-1-0 in five starts as Copper Creek ($7) rallied from last to win race five under Kevin Orozco. . .Rigoberto Velasquez saddled back-to-back winners, as 8-year-old gelding Hello Brown ($11.80) prevailed in race seven and 7-year-old mare Winninginfashion ($6.20) collared Perfect Meeting late to win race eight. . .Jockey Eduardo Gutierrez-Sosa and trainer Hector Magallanes continue to dominate Quarter Horse racing, as L Bar D Bonnie Lee ($3.60) raced to an easy maiden victory in the Saturday opener. Gutirerrez-Sosa and Magallanes have combined to win three of the first four Quarter Horse races this season. . .While Exit Sixty Slew is the first horse to win three races this season, 18 horses are double winners at the meet: Parkers Delight, Jazz Queen, Rallying Market, Vistarella, Say Neigh, Wine At Nine, Hunters Vow, Our Silver Lining, Oh Marvelous Me, She Got Away, Raging Warrior, Lofty Cause, Lovethisbar, Arviat Bay, Calcualted Chaos, Little Dancer, Jerre to Carrie and One More Orman. . .Bruce and Cass Maller, owners of Hastings Stakes winner Citizen Kitty, scored a maiden win at Santa Anita with 3-year-old gelding Cammy’s Music ($6.60). . .In the $50,000 Strawberry Morn Handicap at Hastings Racecourse, Snuggles ($4.60) defeated Dear Lilly by 2 ¾ lengths in 1:45.94 for 1 1/16 miles. . .Live racing continues Sunday with the $50,000 Coca-Cola Stakes for 3-year-old colts and geldings, with Riser the 5-to-2 morning line favorite. First post is 2 p.m.
–##–