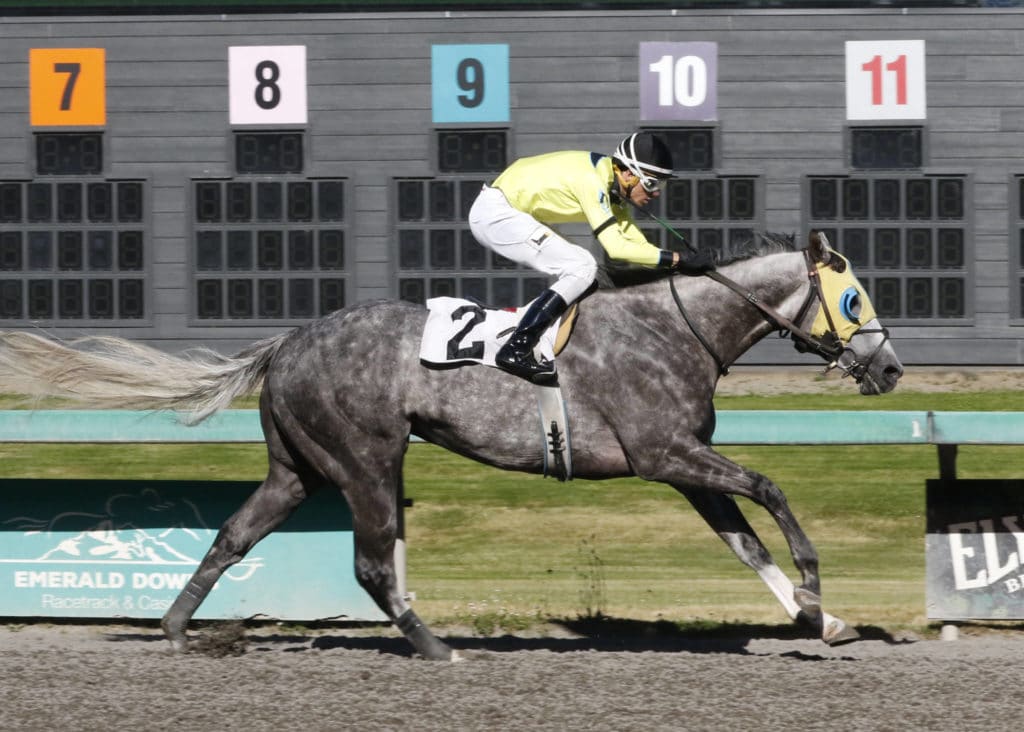 Nine One One and jockey Alex Cruz

NINE ONE ONE IMPRESSES IN SATURDAY FEATURE

AUBURN, Wash. (July 9, 2022) – For the second time this season, Canadian invader Nine One One thumped the locals at Emerald Downs.

With Alex Cruz riding, Nine One One took early heat and drew off late for a 3 ½ length victory over March On Linch in Saturday’s $25,000 Muckleshoot Casino Purse for 3-year-olds and up. The 4-year-old British Columbia-bred zipped six furlongs in a brisk 1:08.59 and paid $4 as the public betting choice.

Last seen winning a maiden special weight here on opening day, Nine One One shipped home to Hastings Racecourse, recording three fast workouts, before returning to Emerald Downs. Trained by Robert Gilker and co-owned by Robert and Victoria Gilker and Ted Smith, Nine One One earned $13,759 to lift his career total to $34,605.

A son of Maclean’s Music, Nine One One debuted Sept. 5, 2020, finishing second in a restricted stakes at Hastings, and then was off until his 2022 debut on May 15, a break of some 20 months.

Breaking from the No. 2 post, Nine One One set a pressure pace of :21.75 and :44.13, shook off Ethan’s Animal and Harbor Outlaw into the stretch, and won with authority.

March On Linch, longest price on the board at 12 to 1, rallied to finish second under Jose Zunino while Forty Smooches, ridden by Leslie Mawing, finished third. Ethan’s Animal, Harbor Outlaw, and Tig completed the order of finish.

NOTES: Total mutuel handle was $885,036 on Saturday’s eight-race card. . .Gilker saddled B.C.-bred Herbie D to a victory in the 2013 Longacres Mile. . .With three wins Saturday, Kevin Radke is now sixth in all-time in Emerald Downs’ wins with 583, two ahead of Rocco Bowen. . .Alex Cruz also had three wins Saturday—his second straight three-bagger—and leads Radke 42-35 atop the riders’ standings. . .In the trainers race, Jorge Rosales and Blaine Wright each had a win and Rosales maintains a one-win lead, 14-13, in the standings. . .2017 Longacres Mile winner Gold Rush Dancer sired his first Emerald Downs winner as 2-year-old filly Fly Patti Fly ($15.60) prevailed as the longest shot on the board in the Saturday opener. . .8-year-old gelding Rocky Tough rallied under Javier Matias for a $23.80 upset in race six for owner/trainer Jim Gilmour. . .Indian Rule, third at 49 to 1 in race eight, returned a season-high $15.40 to show. . .Live racing continues Sunday with the $50,000 Angie C Stakes for 2-year-old fillies and $50,000 King County Express for 2-year-olds colts and geldings. First post 2:15 p.m.
–##–