AUBURN, Wash. (August 4, 2018) – Brilliant Bird powered past the leaders and drew clear for a 6 ½-length victory Saturday in the featured $18,500 Muckleshoot Casino Purse for 3-year-old fillies.

A Washington-bred by Einstein-Clever Bird, Brilliant Bird had been winless in four previous starts this year, including a third and fifth in the Seattle Stakes and Kent Stakes. Saturday’s victory, worth $10,175, improved her ledger to 2-2-1 in six career starts with earnings of $36,737.

Dontkissntell, with Eswan Flores aboard, edged Oh Yes I Did in the final stride for second place, and paid $3.40 and $3.

Oh Yes I Did, with Gary Wales riding, held third and paid $6.80 to show, while Sea Basket, Assemble, Spot On, Fortune’s Freud, and Glitter and Gold completed the order of finish.

Brilliant Bird sat off the pace, as Oh Yes I Did and Sea Basket vied for command through fractions of :22.33 and :44.84 for the quarter and half-mile. The winner rallied three wide into the lane, surged to the fore past mid-stretch, and drew off to win with complete authority. 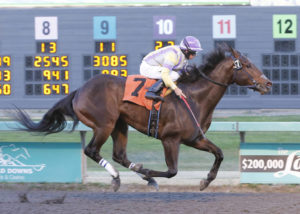 NOTES: Owners’ Prestige ($10.60) produced one of the most unusual storylines of the season in Saturday’s fifth race, rolling to an impressive 6 ½-length victory in 1:09.31 for six furlongs. Owned by Wing “Peter” Ho and trained by Blaine Wright, the winner is a 5-year-old Australian-bred whose two previous starts were in Hong Kong in 2017. . .Kaabraaj breezed five furlongs in :59 2/5 under Jose Zunino in preparation for the $200,000 Longacres Mile (G3) on Sunday, August 12. . . Assemble was claimed for a meet-high $32,000 Saturday by trainer Dan Markle and owner Jeff Stoddard. . .Eswan Flores and Gary Wales rode two winners each Saturday, while Terry Gillihan was the only trainer with two wins. . .Owner Ron Crockett also had two wins, upping his all-time Emerald Downs’ leading total to 255 wins. . . Washington-bred Psycho Sister (Freud-Melba Jewel) finished second in the $50,000 Luther Burbank Handicap for fillies and mares on the turf at Santa Rosa. The Tulip ($7) prevailed in 1:43.68 for 1 1/16 miles, while Emerald Distaff nominee Eccentric Spinster finished sixth. . .Live racing continues Sunday with first post 2 p.m.