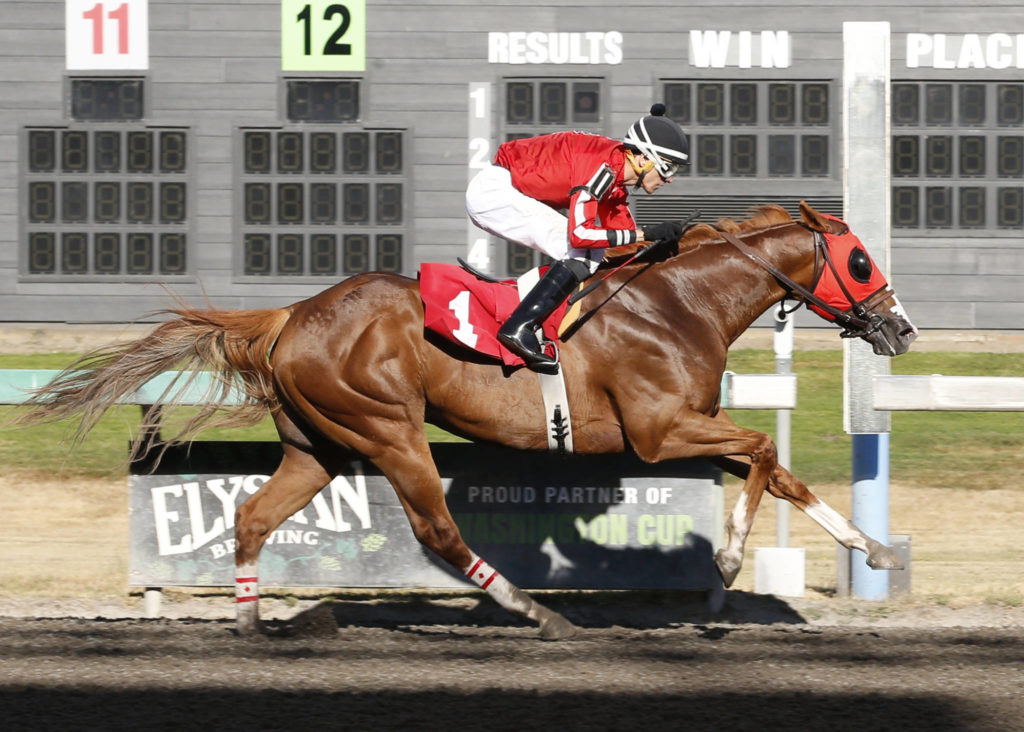 AUBURN, Wash. (Aug. 13, 2022) – Mr. Mischief shook clear in mid-stretch and powered to a 1 ¼-length victory over Toil and Trouble in Saturday’s $20,000 Muckleshoot Casino Purse for 3-year-olds and up at Emerald Downs.

With Alex Cruz riding his third straight winner on the card, Mr. Mischief zipped six furlongs in 1:08.47 and paid $8.40 as second choice in the wagering. Sergio Perez is the winning owner and trainer.

Claimed for $12,500 in California two months ago, Mr. Mischief finished off the board in his first three Emerald Downs’ starts including a fifth in the Irish Day Stakes. Lowered in class Saturday, Mr. Mischief moved through inside to take a short lead into the stretch and drew clear late to win convincingly.

The lone 3-year-old in the race, Mr. Mischief improved to 3-0-0 in seven starts with earnings of $34,300 including $11,000 for Saturday’s victory. The winner is a California-bred colt by Curlin to Mischief.

Toil and Trouble, with Eddie Martinez riding, rallied from last to finish second and Harbor Outlaw, ridden by Jake Samuels, finished third. Muncey, the 6 to 5 favorite, finished fourth and Rings of Saturn and Democrat closed out the order of finish.

Ididntseethatcomin and Hungry Henry were scratched earlier in the day.

NOTES: Total mutuel handle was $888,235 on an eight-race card. . .With three more wins Saturday, Alex Cruz leads Kevin Radke 67-56 in the riders’ standings. . .Radke had two wins Saturday. . .Trainer Sergio Perez had his first two-win day at Emerald Downs, including his feature race victory with Mr. Mischief. . .Bernalinho ($3.60) prevailed in the meet’s 1 1/16-mile race, covering the distance in 1:42.70 while edging 18-time Emerald Downs’ winner Wine At Nine for the victory. . .Mischief Road ($3.20) gave owner John Parker his meet-leading18th win, rallying from off the pace to score under Cruz for trainer Candi Cryderman. With an 11-win lead over Paddock Partners Ltd. and Chad and Josh, Parker is closing in on a fifth leading owner title at Emerald Downs. . .The $0.20 Jackpot Pick 6 was hit Saturday for $10,845.54. . . Live racing continues Sunday with Championship Sunday featuring the 87th renewal of the $150,000 Longacres Mile, along with the $75,000 Emerald Distaff, $75,000 Muckleshoot Derby, and $75,000 Washington Oaks. First post 2:15 p.m.