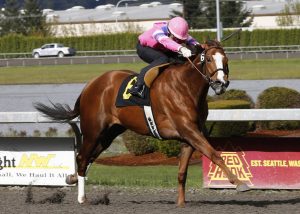 PRIME ENGINE PUTS ON A SHOW IN SATURDAY FEATURE

Barkley, the track’s champion 3-year-old of 2016, overcame a rough start to edge Mach One Rules for second place, paying $3.80 and $2.20, while Mach One Rules finished third and paid $2.20. The Press, Trick Or Retreat and Viwingthegold completed the order of finish.

Winner of the Gottstein Futurity as a 2-year-old and Emerald Downs Derby as a 3-year-old, Prime Engine could be even better as a 5-year-old. Racing for the first time as a gelding, the chestnut son of Northern Afleet rocketed through fractions of :21.29, :42.89 and :54.68, shaking off The Press at the head of the lane and scoring a convincing victory.

“This is probably one of my favorite horses I’ve trained,” Puhich said. “He’s also the most talented horse I’ve trained. He’s had a few little issues, but he’s a good horse.”
Saturday’s race was a prep for the $50,000 Governor’s Stakes on Sunday, May 21. At six furlongs, the Governor’s is first stop on the road to the $200,000 Longacres Mile (G3) on Sunday, August 13.

Barkley did well to finish second Saturday. Bumped and squeezed at the start, he dropped eight lengths behind Prime Engine early, moved five wide on the turn and closed steadily through the lane.

NOTES: Trainer Mary Tate notched her first two Emerald Downs victories Saturday, sweeping the early daily double with Manyshadesofgray ($12) and Papa Frank ($12.60), the latter promoted to first via Big Hat Charlie’s disqualification for interference entering the stretch. Eliska Kubinova rode both of Tate’s winners, both went off at odds of 5-to-1, and both are California-breds out of the same dam, Tialinga. . .In addition to Prime Engine, Dedomenico, Puhich and Flores also clicked with Rio Norte ($12), a first-time starter by Harbor the Gold out of 2003 Emerald Downs Horse of the Meeting Youcan’ttakemethat led gate-to-wire in race three. . .Puhich’s two wins move him into a three-way tie with Blaine Wright and Frank Lucarelli atop the trainers’ standings with four wins each. . .Live racing continues Sunday at 2:15 p.m. In the $21,500 feature race for older fillies and mares, Invested Prospect is 9-to-5 in her season debut for Wright and owners John and Janene Maryanski and Riverbend Farm.
–##–