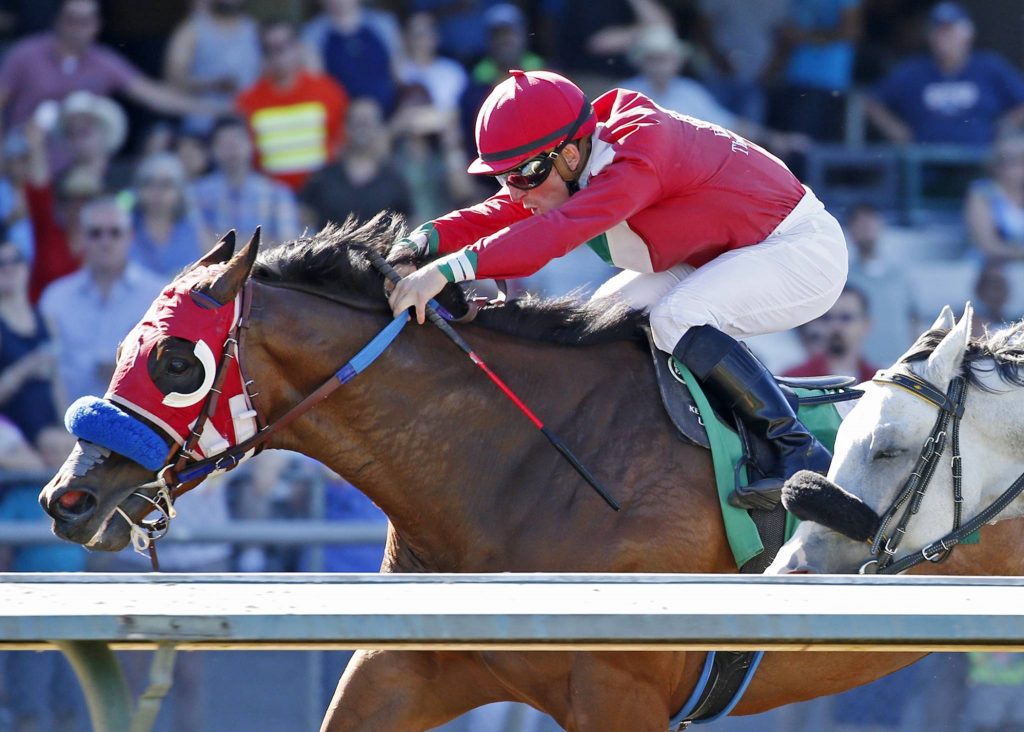 Blame It On Royce

BLAME IT ON ROYCE ALL THE WAY IN FEATURE

Ridden by Julien Couton, Blame It On Royce ran 6 ½ furlongs in 1:14.69 and paid $4.40, $2.60 and $2.10 as the betting favorite. Blaine Wright is the winning trainer for owners Luigi DiPietro of Seattle and Diana DiPietro of Tukwila.

Hustled to the early lead, Blame It On Royce set fractions of :22.52 and :44.93, shook off First Thought into the lane, and held off a surging Blue Law in the final sixteenth for the victory.

A 5-year-old Kentucky-bred by Blame-Bisbee’s Prospect, Blame It On Royce was purchased at the Northwest Farms Dispersal Sale by the DiPietros, and has won three of his last four starts. Undefeated in two starts in 2016, Blame It On Royce has a 3-1-2 record in seven lifetime starts with earnings of $33,665 including $6,215 for Saturday’s triumph.

Blue Law, with Rocco Bowen riding, mounted a steady challenge inside but was a neck short at the wire. The runner-up paid $3.80 and $2.60. First Thought, ridden by Juan Gutierrez, held third and paid $2.40 to show.

NOTES: Julien Couton has made an immediate impact at Emerald Downs, scoring his second straight riding double Saturday including a sharp ride on Blame It On Royce in the feature. . .Eswan Flores and Isaias Enriquez also had riding doubles Saturday. . .With the win in the feature race, Blaine Wright extended his lead to 21-16 over Frank Lucarelli atop the trainers’ standings. . .Trainer Joe Toye remained red hot with two more wins and is 11-for-35 at the meet. . .Rosie’s Reward ($5.40) rallied to win Saturday’s maiden claiming race for 2-year-old fillies in :51.95 for 4 ½ furlongs. A Kentucky-bred by Warrior’s Reward, Rosie’s Reward is owned by Art McFadden and gave trainer Jonathan Nance his second win in two days. . .Class Won ($3.60), younger brother of Barkley, broke his maiden in his fourth career start Saturday at Emerald Downs. The winner is a 3-year-old Kentucky-bred by Caleb’s Posse-Numero d’Oro. . .With a victory on Excess R E in the Saturday finale, Leonel Camacho-Flores overtook Geoffrey Cooper for No. 19 all-time with 262 wins at Emerald Downs. . .Live racing continues Sunday with the $50,000 Irish Day Stakes for 3-year-old fillies at one mile. First post is 2 p.m.
–##–