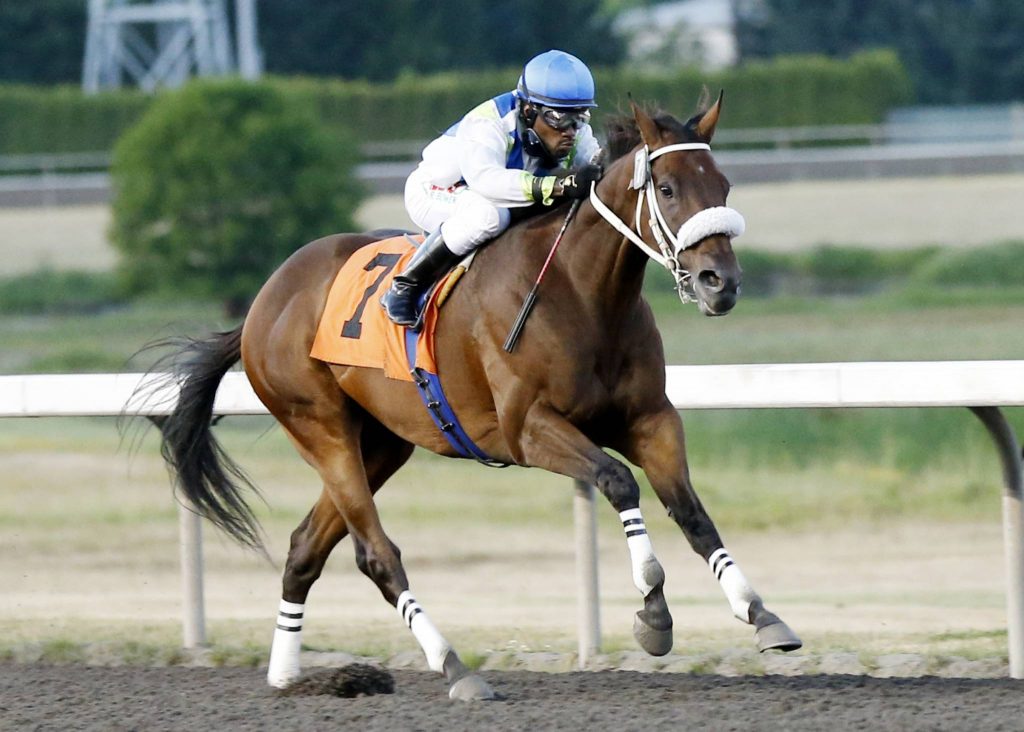 Mike Man’s Gold is now three-for-three this season, and the 7-year-old gelding ranks No. 1 among active horses with 15 career wins at Emerald Downs. A Washington-bred by Liberty Gold, Mike Man’s Gold has an overall mark of 15-5-5 in 44 starts with earnings of $268,092.

Remembertobreathe, ridden by Julien Couton, emerged from the pack to finish second and paid $3.80 and $2.80, while Archie Graham, with Javier Matias riding, closed from last to finish third and paid $3.40 to show.

Oldtimers Vision, Hoody and Commander Lute rounded out the order of finish; He’s Cagey was scratched earlier in the day.

NOTES: Aqua Frio with a 1:34.82 in the Seattle Slew Stakes ran the previous fastest mile of the meet. . .Mike Man’s Gold is the eighth horse with three wins at the meet, joining Wine At Nine, Heroes for Ghosts, Hello Brown, Oh Marvelous Me, Rockport Birdie, Jerre to Carrie and Exit Sixty Slew. . . Mike Man’s Gold is tied for No. 6 in all-time wins at Emerald Downs. He’s six behind West Seattle Boy, who won 21 races before retiring in 2012. . .Trainer Sam Dronen enjoyed a two-for-two evening including a $62.60 upset by Captain Shaddock in the fourth race. . .Bowen and Juan Gutierrez each rode two winners on the seven-race program. . .5-year-old Party Pooper ($7.20) was back in form with a head victory over Ready Set Jet in race three for $15,000 claimers. Trained by Tim McCanna and ridden by Eswan Flores for Royal Victory Thoroughbreds, Party Pooper ran 6 ½ furlongs in 1:14.84. . .Gold Rush Dancer looks to rebound Saturday in the $100,000 Bertrando Stakes for California-breds at Los Alamitos. With Evan Roman riding for the first time, Gold Rush Dancer is 8-1 on the morning line. . .Angelofmontgomery, the second most expensive horse sold at the March Pegasus Sale, debuts Saturday in a $26,000 maiden special weight for 2-year-old fillies at Pleasanton. A Kentucky-bred by Candy Ride-Sex Appeal, Angelofmontgomery (2-1) sold for $75,000 to owner Peter Redekop and trainer Blaine Wright. Wright and Redekop actually have two Pegasus purchases in the race; Assemble, by Bodemeister-Changing Plans, sold for $32,000 at the March Sale and is second choice at 3-1. . .Live racing continues Saturday with the first of four Saturday evening racing cards in July. First post is 6:30 p.m.
–##–