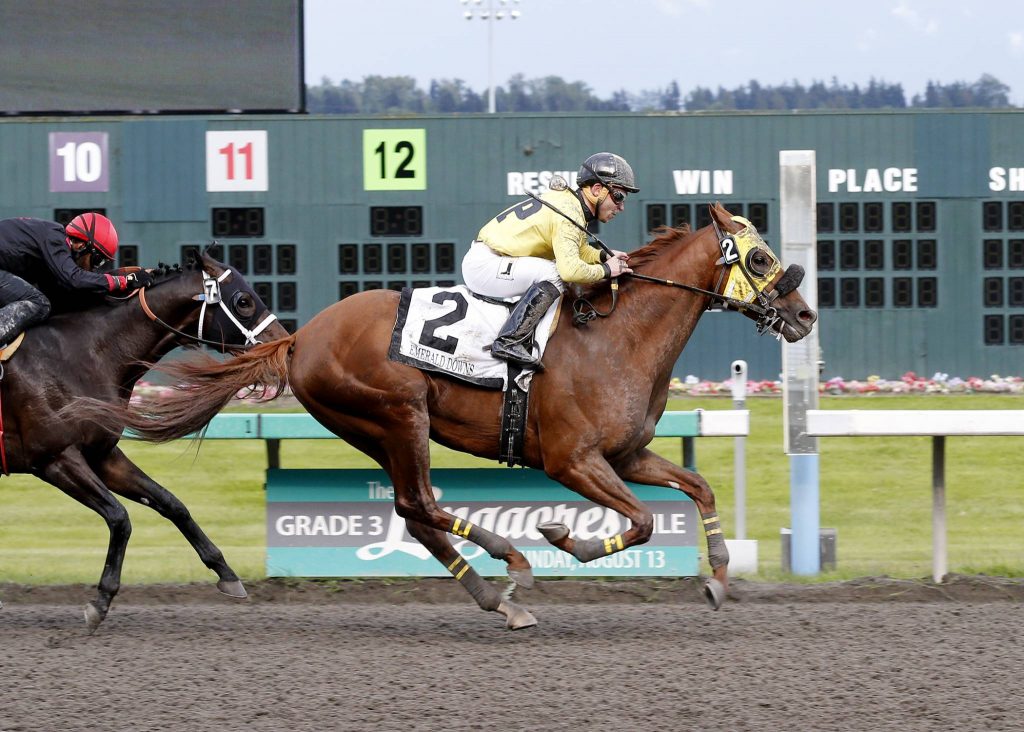 Sharkzilla, upset winner of the Auburn Stakes last month, heads the local contingent while Strate Remark invades from Canada to add international intrigue to the lineup.

Unraced since a 5 1/2-length rout in the $75,000 Ascot Graduation last August, Strate Remark was among the top juveniles at Hastings Racecourse last year, compiling a 3-1-0 record in five starts and earnings of $77,410. A British Columbia-bred by Sungold-Remarkable Gal, Strate Remark is younger brother of Hastings stakes winners Sunnyside Gal, Remarkable Miss and Trick of the North.

Trained by Cindy Krasner and owned by Riversedge Racing Stables, Strate Remark worked six furlongs in 1:11 4/5 at Hastings on May 22, and with So Lucky out of action gets Rocco Bowen to ride.

Sharkzilla won’t pay $37 if he wins the Coca-Cola. In one of the most exciting stretch runs of the season, the Distorted Reality colt passed all seven rivals in the stretch to capture the Auburn under Erick Lopez in 1:08.92 for six furlongs.

Owned by John Parker, Sharkzilla is 2-2-2 in six starts with earnings of $70,134. If Sunday’s workout–five furlongs in :59 flat–is any indication, the chestnut colt appears to be on edge for another big effort

“Sharkzilla is training awesome,” trainer Candi Tollett said. “But this race is definitely another step up for him.”

Riser, whose 86 Beyer in a 5 1/2 furlong allowance race last Month is tops of any horse in the field, and Sure Sweet, a solid third at 43-to-1 in the Auburn, also will have backers Sunday. 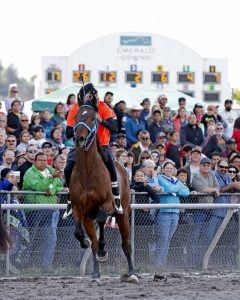 The countdown is on for one of the season’s biggest events. Indian Relay Racing returns for its annual three-day competition—Friday, June 9 though Sunday, June 11—featuring many of the world’s best relay teams competing in the $50,000 Muckleshoot Gold Cup.

Tribes from Idaho, Montana, South Dakota, Oregon and Washington will be represented as Emerald Downs hosts the nation’s oldest sport with a history that goes back 500 years. In Indian Relay Racing, competing teams race twice around the one-mile track and exchange horses every half-mile. Each team’s rider must leap from one galloping horse to another in their assigned exchange box while other team members assist in handling the horses.

Carlson Relay from Browning, Montana is the defending champion. 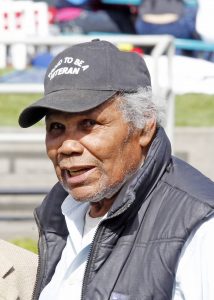 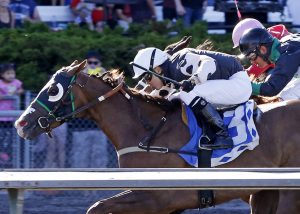 FINISH LINES: With 40 wins in the first 23 days, Rocco Bowen is on pace to top last year’s total of 110 wins in 70 days. Bowen has wins on 12 straight cards and hasn’t blanked since May 5. . .Boundary Bay, full brother to O B Harbor, debuted with a head victory Sunday in a $20,000 maiden special weight for 2-year-olds at Hastings Racecourse. A Washington-bred by Harbor the Gold-Flying Memo, Boundary Babe sold for $32,000 at the 2016 WTBOA Summer Yearling Sale. . .John Parker tops the Emerald Downs’ owners’ standings with five wins and reports Gold Rush Dancer makes his 2017 debut in the $100,000 Thor’s Echo Stakes on Sunday, June 11 at Santa Anita. The Thor’s Echo is six furlongs on dirt for California-breds 3-year-olds and up. . .At Hastings Racecourse, Dear Lilly, co-owned by Dr. Mark Dedomenico and Glen Todd, goes for her third stakes score of the meet in Saturday’s $50,000 Strawberry Morn Handicap for older fillies and mares at 1 1/16 miles. And on Sunday, defending champion Modern heads a field of 12 in the John Longden 6000 at 1 1/16 miles . .Santa Anita offers two Grade 1 events Saturday—the $400,000 Shoemaker Mile at one mile on turf and $400,000 Beholder Mile Stakes for older fillies and mares with Stellar Wind the 3-to-5 morning line favorite. . .2016 Emerald Downs Bank of America Emerald Championship Challenge winner Sorelli makes her 2017 local debut in Sunday’s first race, a $5,000 allowance for 3-year-olds and up at 350 yards. . .Friday night is Brewers Night at Emerald Downs with special prices on craft beers from Northwest Brewing Company and a live DJ by the winner’s circle. . .Also Friday, instructor Andy Smallman and 21 Puget Sound Community School students make their annual trek to Emerald Downs’ for a night of fun and handicapping. This is the 14th year Smallman has taught horseracing handicapping at PSCS. . .In last Saturday’s 4th race at Emerald Downs, 2-to-1 betting favorite Nice Guys Finish finished last.