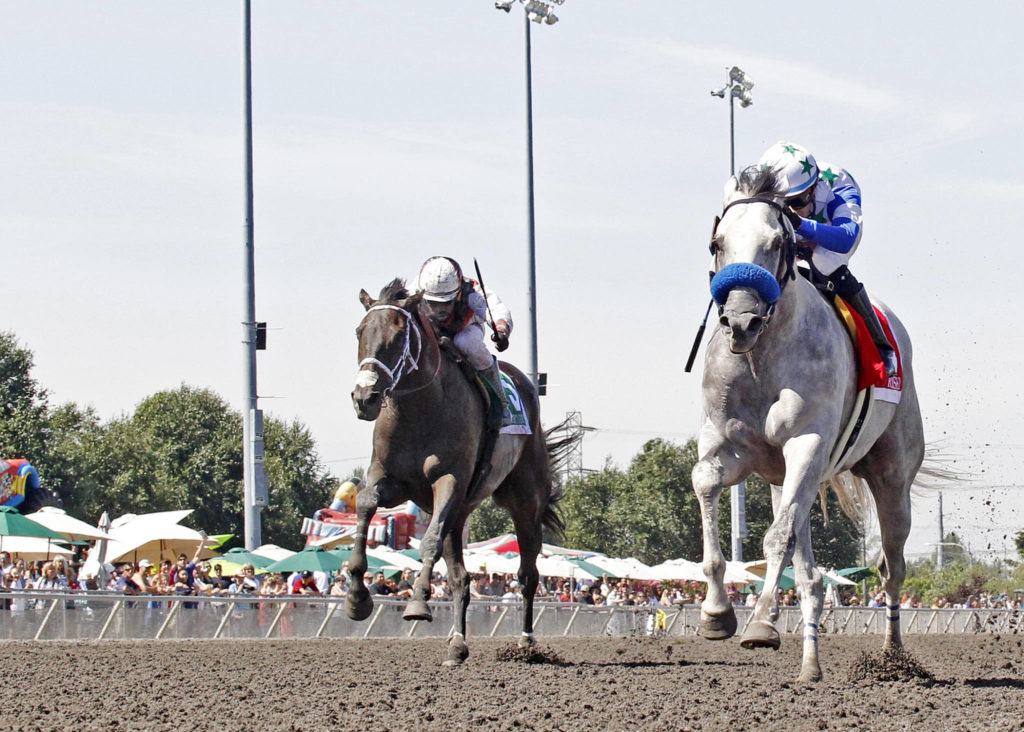 Dedicated to You (left) promoted to first in the Budweiser

DEDICATED TO YOU TAKES BUDWEISER VIA DQ

AUBURN, Wash. (June 24, 2018) – Dedicated to You collected an overdue stakes victory Sunday in the $50,000 Budweiser Stakes for 3-year-olds and up at Emerald Downs.

But it took a disqualification to get the 6-year-old gelding into the winner’s circle.

Riser, the 2-5 betting favorite, led all the way for an apparent 2 ¾-length victory in 1:15.65 for 6 ½ furlongs. But following a stewards’ inquiry and an objection by trainer Howard Belvoir, Riser was disqualified and placed fifth (last) for interfering with Barkley at the break.

The stewards’ statement: “After reviewing the videos and taking testimony from the riders involved the stewards determined that #1 Riser came out sharply at the start of the race causing interference with #2 Barkley. The stewards decision was that the incident cost #2 Barkley the opportunity of a better placing and disqualified Riser from first place and placed him last.”

Dedicated to You, longest shot on the board at 11-1, was elevated from second to first place, Mach One Rules from third to second, Mah Gellin from fourth to third, and Barkley from fifth to fourth.

Dedicated to You, who closed strongly in the stretch to finish second, gained his first stakes victory of his 15-race career. A Washington-bred by Purim-One for You, he had several excellent races on his resume—third in the 2017 Longacres Mile, seconds in the 2016 Mt. Rainier Stakes and 2017 Muckleshoot Tribal Classic—but this was his first stakes win.

“(Dedicated to You) always gives everything he has,” said owner/breeder Barbara Ratcliff of Bellevue, Wash. “Some people might say that’s not the way to win a stakes race. But I’ve had the same thing happen to me. This is horse racing.”

“The plan was to be more patient today,” Bowen said. “We got sacrificed last time chasing Riser, and we didn’t want that to happen again today. This horse has a bright future.”

Mach One Rules, ridden by Kevin Orozco at 122 lbs, chased Riser from flag fall to mid-stretch before weakening in the final furlong. Mach One Rules paid $4.60 and $5.20, while Gellin, with Austin Solis riding 120 lbs, paid $10 to show.

Riser, undefeated in three Emerald Downs’ sprints before Sunday, ran a virtual repeat of his 4 ¼-length victory in the June 3 Governor’s Stakes. With Juan Hernandez aboard at 124 lbs, the gray 4-year-old colt was in complete control throughout the race, setting fractions of :22.15, :44.19 and 1:08.97, and was three lengths clear into the lane.

NOTES: The DQ was the first in a stakes here since Rainier Ice was disqualified and placed sixth in the 2011 Coca-Cola Handicap. . .Riser accounted for $13,764 of $24,487 in the win pool. . .Bowen has three stakes wins this season and is No. 6 all-time with 28 stakes wins at Emerald Downs. . .Anne Sanguinetti rode back-to-back long shot winners—Tesla ($22.40) and Endangered ($20.80)—her seventh and eighth $20 or higher winners at the meet. . . Curious Rumor ($3.60) became the meet’s third triple winner with an easy victory in race nine for 3-year-old fillies. Frank Lucarelli is the trainer and co-owner with Chris Randall and Nick Rossi. . .Former Emerald Downs’ rider Jorge Rosales notched his first win here as a trainer with Beefcake ($8.40) in the Sunday nightcap. . .Classic Leah, a filly racing against colts, debuted with a $27.20 victory in Sunday’s third race for $15,000 maiden claiming 2-year-olds. With Patrick Henry Jr. riding for trainer Vince Gibson and owner Paul Johnson, Classic Leah ran 4 ½ furlongs in :53.03. . .Live racing resumes Friday with a twilight card at 6:30 p.m.