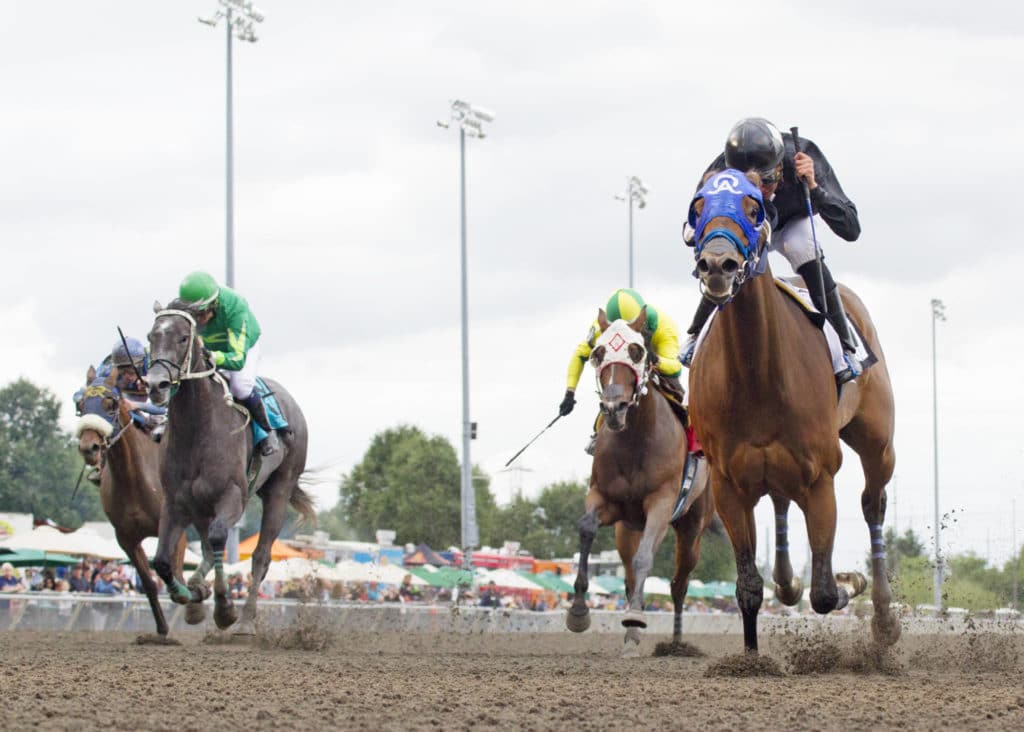 BEST OF ME PREVAILS IN WASH STATE LEGISLATORS

AUBURN, Wash. (June 23, 2019) – Best of Me took control into the turn and romped to an impressive three-length victory over stable mate Bella Mia in Sunday’s $50,000 Washington State Legislators Stakes for older fillies and mares.

A Kentucky-bred 4-year-old by Super Saver, Best of Me is two for three at the meet, and atoned for a fourth as the betting favorite month last month’s Hastings Stakes. In the latter, Best of Me was bumped off stride late and lost her best chance.

Best of Me enjoyed clear sailing Sunday. Ceballos guided the bay filly through an opening inside and gained command into the turn, wresting the lead from Ima Happy Cat, and that pretty much was it. She Me was two lengths clear into the lane, running the half in :44.17, and drew off to win with complete authority.

Bella Mia, ridden by Juan Gutierrez, edged Dontkissntell for second to complete the Wright exacta and paid $3.80 and $2.60. A 4-year-old Washington-bred by Harbor the Gold, Bella Mia is 5-4-2 in 12 starts lifetime with $160,923 in earnings for John and Janene Maryanski. Bella Mia finished second in both stakes this season, although she was placed fifth for interference in the Hastings.

“I’m very proud of both fillies, and super happy for Shawn, Todd and Ethan,” Wright said. “And Ceballos rode a helluva race today.”

Wright has now won five of the first seven stakes this season, and 25 since the start of the 2017 meeting—18 more then any other trainer.

Dontkissntell, ridden by Ryan Barber at 119 lbs finished third and paid $2.60. A 4-year-old Rosberg filly, Dontkissntell is 1-1-1 in three starts at the meet including a pair of stakes placings. No Talking Back, Paddy’s Secret, Foggia and Ima Happy Cat rounded out the order of finish.

Ceballos has three stakes wins this season, all riding for Wright, including two aboard unbeaten 3-year-old Baja Sur.

Diamonds R, Always Enuff and Summer Storm were scratched earlier in the day. 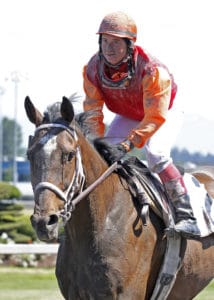 NOTES: Jennifer Whitaker celebrated her 48th birthday Sunday and was victorious with her only mount, guiding Perfect Blossom ($3.80) to a maiden triumph in the sixth racefor owner/trainer Howard Belvoir. . .Sunday’s 10th race was the Bob Whitaker Memorial Purse in honor of Jennifer’s father, who passed away at age 79 in March. . .4-year-old filly Rosso’s Gatto ($14.20) and 3-year-old filly All Star Allie ($5.40) became the meet’s third and fourth triple winners with victories Sunday, both with Eddie Martinez riding for trainer Jorge Rosales and owner Marjorie Avery. . .Gary Wales rode three more winners Sunday and now leads Martinez and Kevin Orozco 40-22 atop the riders’ standings. . .Wales has at least one win 16 straight racing days. . .Wright has wins on seven straight cards and is second overall with 19 wins. . . Windy Point ($18.20) debuted with a gate to wire victory under Juan Gutierrez in Sunday’s $18,500 maiden special weight for 2-year-old fillies. . . Staracrossthewater ($22.80) led gate to wire to give jockey Francisco Diaz-Lopez and trainer Elodio Madrigal their first wins of the meet. . .What are the odds two New York-breds sired by Courageous Cat would win the same day at Emerald Downs? It happened Sunday, as Rosso’s Gatto and seventh race winner Kalla Kab ($29.80) both scored victories. . .At Santa Anita, Washington-bred Pas de Panique ($5.80) prevailed in a $65,000 maiden special weight for 2-year-olds. Trained by Mark Glatt for Where We At, Pas de Panique is out of multiple Emerald Downs’ stakes winner Carrabelle Harbor. . .Congratulations to John Lindley, co-owner of Majestic Eagle ($20), upset winner of Sunday’s $100,000 American Stakes (G3) at Santa Anita. Lindley is the long-time publisher of Parker’s Picks and also provides excellent trip notes for emeralddowns.com. . .At Grants Pass, Idaho-bred 7-year-old Wild Derby Daze scored a $40.20 upset in the $3,500 Southern Belle Stakes for older fillies and mares. . .Live racing resumes Friday with first post 6:30 p.m.
–##–