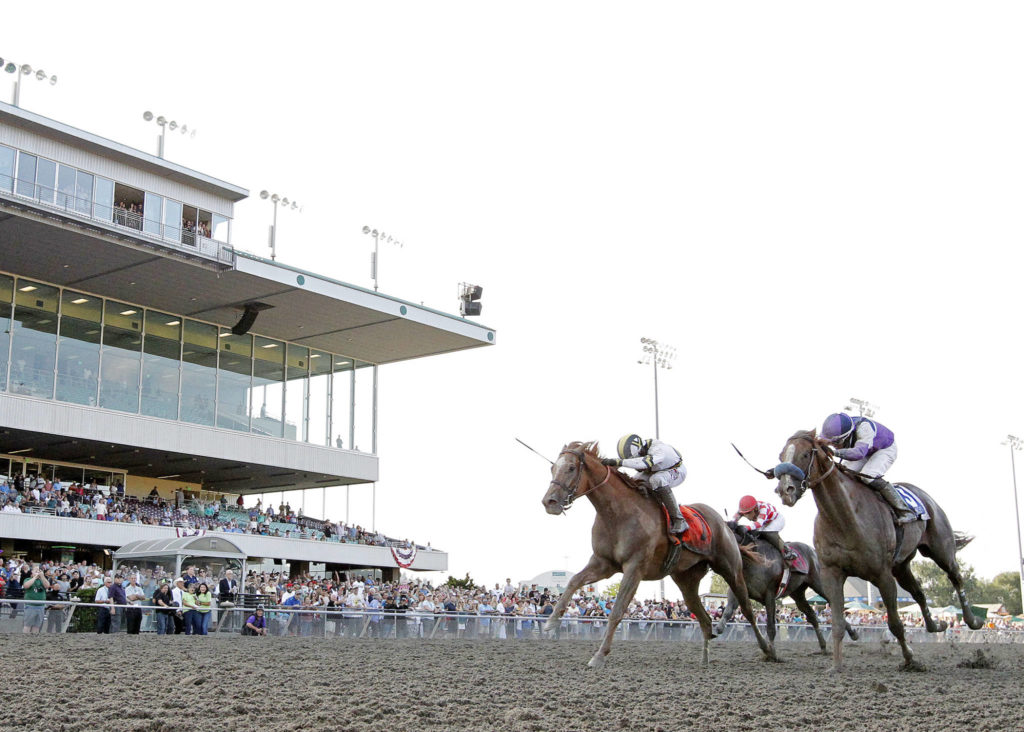 Background (No. 7) catches Windribbon in the 2021 Longacres Mile

Background drew the No. 4 post-position and was made a 2 to 1 morning line favorite in his bid to become the fifth two-time Mile winner, and just the second at Emerald Downs. Trained by Mike Puhich for Bob and Molly Rondeau of Normandy Park, the 5-year-old Florida-bred is 6-3-4 in 20 career starts with earnings of $430,488 including a 4-1-1 record in six starts at a mile.

“He’s had a bit of a gap between races, and he runs really well fresh,” Puhich said of Background. “Unfortunately, Rocco Bowen won’t be here to ride him, but Rocco breezed him last week and was really pleased with the work.

“If (Background’s) as good on Sunday as he is this morning, he’s going to be a tough customer.”

A three-time Emerald Downs’ riding champion, Bowen guided Background to an emotional come from behind victory in the 2021 Mile but was injured Monday at Presque Isle Downs and underwent surgery Wednesday for a broken clavicle and is sidelined indefinitely.

Geovanni Franco, who rode Background to victories at Oaklawn Park and Churchill Downs this spring, rides Background along with probable favorite Princess of Cairo in the $75,000 Emerald Distaff and Big Java in the $75,000 Washington Oaks.

Trainer Blaine Wright has been in the thick of the Longacres Mile the last four years, compiling a win and three seconds since 2018, and saddles Top Executive, Huge Bigly, and Torpedo Away in this year’s race. The reigning Emerald Downs’ Horse of the Meeting, John and Janene Maryanski and Riverbend Stable’s Top Executive is 6-1-0 in 11 career starts including a sparkling 5-1-0 from eight starts at Emerald Downs with four stakes wins. A 4-year-old Street Boss gelding, Top Executive is one for one routing on dirt, capturing the 2021 Muckleshoot Derby at a mile and one-sixteenth.

Todd and Shawn Hansen’s Huge Bigly is one of six Washington-breds in this year’s Mile (Huge Bigly, Papa’s Golden Boy, Slew’s Tiz Whiz, Spittin Image, Torpedo, Away Unmachable). A 5-year-old by Midshipman out of the Emerald Downs’ stakes winning mare Gadget Queen, Huge Bigly earned over $140,000 in 2021 and showed versatility in winning on synthetic at Golden Gate, turf at Colonial Downs, and dirt at Churchill Downs.

Slew’s Tiz Whiz enters the Mile in peak form for trainer Tom Wenzel. The 4-year-old Slew’s Tiznow gelding has won consecutive sprints including a come from behind score in the Governor’s Stakes at 6 ½ furlongs. He won a one-mile allowance last year at age 3.

Lusk Racing’s Papa’s Golden Boy, the dominant sprinter at Emerald Downs the last two years, drew the No. 12 post-position and figures to be flying early under jockey Kevin Radke. The 6-year-old Harbor the Gold gelding held on well last year and was beaten just 2 ¼ lengths while finishing fourth to Background.

Elttaes Stable’s Five Star General has figured prominently the last two years, finishing second to Anothertwistafate in 2020 and third to background in 2021. His jockey, Leslie Mawing, and trainer, Doris Harwood, have both previously won the Mile.

Spittin Image hails from the barn of the meet’s leading owner, John Parker, and comes off a third in the Governor’s Stakes. Unamachable, a stakes winner here at ages 2 and 3, is two for two this year with both wins in Arizona.

Torpedo Away is winless in two tries around two turns, but the 6-year-old Jake La Gold gelding ran the meet’s fastest 6 ½ furlongs, 1:14.26, two weeks ago. Hard to Deny finished eighth in the 2021 Mile and is 3-1-1 in six starts at a flat mile. Kingmeister, a recent $50,000 claim at Churchill Downs, gives 94-year-old trainer Bob Meeking his first Mile starter since 1979.

Entries also were drawn Wednesday for the $75,000 Emerald Distaff, $75,000 Muckleshoot Derby, and $75,000 Washington Oaks. A special $0.50 Pick 4 will be offered on the four Championship Sunday stakes with ideal racing conditions—78 degrees and clear—forecast.