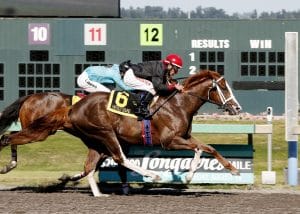 Barkley (No. 6) edges Mach One Rules in the Coca-Cola Stakes

At 1 1/16 miles, the Seattle Slew is the final steppingstone to next month’s $75,000 Emerald Downs Derby, and highlights a special twilight card of racing that features the annual Fireworks Spectacular Presented by Carl’s Jr.

A Kentucky-bred by Munnings, Barkley has performed spectacularly in three starts this season for trainer Howard Belvoir and jockey Javier Matias, rallying from slightly off the pace to win, in order, a $20,700 allowance race, the $50,000 Auburn Stakes and the $50,000 Coca-Cola Stakes. In the latter, Barkley passed his first route test with flying colors, tagging a loose-on-the-lead mach One Rules late for a neck victory in 1:35.88 for one mile.

A close second to Barkley in the Auburn and Coca-Cola, Mach One Rules looks to turn the tables in the Seattle Slew Stakes. A Washington-bred by Harbor the Gold, Mach One Rules has four wins and two seconds in six career starts and also ran well in his route debut, just failing to last in a hotly contested stretch duel.

Allaboutaction would be a factor if he runs in the Seattle Slew. Conditioned by Jerry Hollendorfer, the $200,000 Candy Ride gelding earned an 86 Beyer finishing runner-up to He’s a Tiger in a $29,000 allowance sprint June 16 at Pleasanton.

The Seattle Slew Stakes has been a graveyard for favorites with no less than 11 straight betting favorites going down the tubes in the meet’s second two-turn test for sophomores. Last year, Betrbegone produced a $68.60 shocker over Prime Engine and O B Harbor.