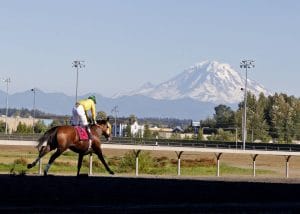 SUNNY DAYS AT EMERALD DOWNS IN 2016

AUBURN, Wash. (September 14, 2016) – For the second straight year sunny skies, larger fields and a higher daily average handle were the stories of the 70-day Emerald Downs’ meeting that concluded September 11.

On track attendance was steady this season with the highlight being a crowd of 13,328 on July 3rd, the largest in the past five years. Other highlights of the meet included the track’s 20th Anniversary celebration and the renaming of Emerald Downs Drive to Ron Crockett Drive. Said Ziegler, “Ron Crockett and his partners built this beautiful track 20 years ago and made a commitment to live horse racing. Ron continues to play an integral role at Emerald Downs. The Muckleshoot Tribe, who now own the facility, have continued the commitment and have invested approximately $15 million in purses since 2004.”

Emerald Downs experienced great weather for the season.   There was sunshine for 51 of the 70 race days, clouds for 14 days, and it rained during portions of just 5 days.   The average temperature for the 70 days was 72 degrees. Director of Media Relations Vince Bruun expanded on the great weather, “We have some of the best spring and summer weather in the country. It’s perfect for the horses, our fans, and for folks who are handicapping and wagering on our races. We had a fast track all but one day this entire season!”

On the track jockey Rocco Bowen and trainer Blaine Wright captured their first titles and O B Harbor, who won four of five starts including three stakes, was voted Horse of the Meeting. For a complete list of season awards and more information on Emerald Downs visit www.emeralddowns.com.