KAABRAAJ TOO FAST AT TURF PARADISE

Kaabraaj continued his eventful 2016 campaign for trainer Jeff Metz with a sharp performance in the $35,000 Bienvenidos Stakes on opening day Saturday at Turf Paradise.

Ridden by Eswan Flores, the 4-year-old Washington-bred gelding led gate-to-wire for a 2 ¼-length triumph in 1:15.81 for 6½ furlongs and paid $7 as the second choice in the wagering. Kaabraaj earned an 87 Beyer and $18,228 for owners Warlock Stables and Horse Players Racing Club.

Kaabraaj has two wins in 2016, the Bienvenidos and an April 23 allowance race in which he set an Emerald Downs record 1:06.86 for 6 furlongs. Kaabraaj also finished second to Emerald Downs’ Horse of the Meeting O B Harbor in a 5½-furlong allowance race, and third to O B Harbor in the $50,000 Governor’s Stakes. There also was a trip to California for three very tough stakes engagements, the best result being a fourth in the Grade 1 Bing Crosby at Del Mar.

Gunned to the lead by Flores—who led all riders with five wins opening week at Turf Paradise—Kaabraaj set fractions of :22.95, :44.93 and 1:09.14, and repelled 3-to-5 favorite Storm Power in the lane.

Absolutely Cool edged Storm Power for second to make it an all Washington-bred exacta. State champion sprinter the last three years, Absolutely Cool earned $5,880 and pushed his lifetime total to $406,982 for owner/breeder Karl Krieg. The 9-year-old Absolute Harmony gelding is the 27th Washington-bred to surpass the $400,000 mark. 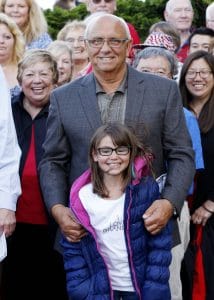 After leading all trainers with seven stakes wins at Emerald Downs in 2016, Washington Hall of Fame trainer Howard Belvoir is continuing his winning ways at Portland Meadows.

Tuesday, Belvoir was the training star as Mary Lois and My Chief both posted stakes wins as PM featured a stakes triple-header over a wet-fast racing strip.

In the day’s third stakes, Washington-bred Keller’s Gold ($2.20) cruised to an 8½-length victory over Kota Copy in the $11,000 Willamette River Stakes for 2-year-old colts & geldings. Ridden by Matias, Keller’s Gold ran 5½ furlongs in 1:04.88 and earned $6,078 for owner/breeder Keith Swagerty. By Liberty Gold, Keller’s Gold won two races and over $30,000 at Emerald Downs this year.

Rocco Bowen, meanwhile, has 12 calls the first three days at Golden Gate, two Thursday and five both Friday and Saturday, as the 2016 Emerald Downs champion attempts to gain a foothold in California. 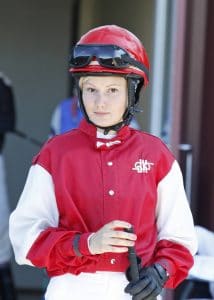 Kubinova back in the saddle

Gordy Jarnig says 2009 Washington Horse of the Year Reba Is Tops has a four-month old foal by Acclamation and plans to breed the 12-year-old mare to Harbor the Gold in 2017. . .Tilltheluvrunsout turned in one of the biggest upset in Northwest history October 11, scoring a two-length victory at odds of 152-to-1 in the third race at Portland Meadows. The 3-year-old Rallying Cry filly paid $306.40 to her scattered backers; she had a mere $36 in the win pool. . .Sneakin Cat, a 4-year-old Parker’s Storm Cat gelding that begin his career at Emerald Downs in 2015, has piled up nine wins this year at a pair of Alberta tracks, Lethbridge and Grand Prairie. Sneakin Cat had a six-race win streak snapped with a neck defeat in Sunday’s $11,000 Farewell Sprint Stakes. . .Eliska Kubinova, back riding after taking a year off for childbirth, has eight wins in her first 32 mounts (25%) and is tied with Nathan Haar for first place in the Portland Meadows’ riders’ standings. Haar, who rode three winners Tuesday, is a 21-year-old native of North Dakota and rode 23 winners this summer at Colorado’s Arapahoe Park. . .Mach One Rules worked 6 furlongs in 1:14 3/5 Sunday for trainer Frank Lucarelli at Golden Gate and is on course for the $100,000 Damascus Stakes at Santa Anita on November 4. At 7 furlongs, the Damascus is part of the Friday Breeders’ Cup under card that culminates with the $2 million Breeders’ Cup Distaff featuring undefeated Songbird. . .Lucarelli also sends out Washington-bred gelding Mana Strike in Saturday’s $100,000 California Flag Handicap for 3-year-olds and up at about 6½ furlongs on Santa Anita’s downhill turf course. . .Gold Rush Dancer continues to train well for Vann Belvoir at Santa Anita, posting a 5-furlong drill in 1:02 flat Wednesday, and also could be in action in a Breeders’ Cup under card race. Although he finished 12th in the Del Mar Derby (G2), Gold Rush Dancer was beaten only 4¼ lengths and earned a career-high 91 Beyer. . .Mike Man’s Gold, scratched from the Bienvenidos Stakes, is entered in a $25,000 allowance./optional claimer at 7½ furlongs on turf Saturday at Turf Paradise. . .Also Saturday at Turf Paradise, Washington State Legislators Stakes winner B C Z Middleton and Washington-bred Dance With Effie compete in the $30,000 Princess of Palms Stakes for older fillies and mares at 6 furlongs.
-##-