Auburn, WA – Washington breds were on center stage today as the Washington Cup held its first two races, both for 2-year-olds while Wiener dogs and Wannabes raced between the Thoroughbred races.

Chuckanut Bay and Runnin Out of Days turned the $50,000 WA Cup Juvenile Colts and Geldings into a thrilling match race the entire 6-1/2 furlong distance.

The big favorite Runnin Out of Days (1/5), who is trained by Blaine Wright, was a step slow from the inside post draw while Alex Cruz, the tracks leader rider, sent Chuckanut Bay (5/1) to the lead and after a quarter mile they were head and head.

The two 2-year-olds raced together through the turn distancing themselves from the other four runners. 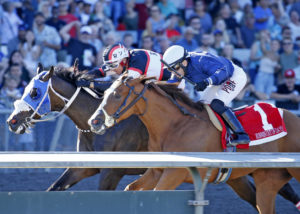 They turned for home right next to one another with Chuckanut Bay (#4) on the outside and Juan Gutierrez and Runnin Out of Days (#1) right near the inside fence.

The two WA-breds slugged it out down the stretch exchanging bumps at the 1/16th pole and with 70 yards remaining until the wire.

Chuckanut Bay, who is trained by the tracks leading trainer Jorge Rosales, crossed the finish line first, a head better then his rival.

A stewards inquiry ensued and a jockey objection. After roughly five minutes, the stewards after review disqualified Chuckanut Bay for alleged Interference in the stretch and placed him second while moving Runnin Out of Days to first place.

“It’s hard to lose that way and hard to win this way,” said Wright after his horse was moved up to first for owners BDW Racing LLC, Abel Pulver and Shawn Sudo. 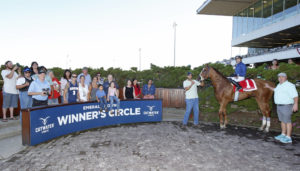 Annette Marie flashed good early speed with Kevin Radke aboard and led basically wire-to-wire around the Emerald oval winning the $50,000 WA Cup Juvenile Fillies Stakes. She ran the 6 1/2 furlongs in 1:18 2/5 winning by 3/4th of a length. “She ran a great race,” said Radke. 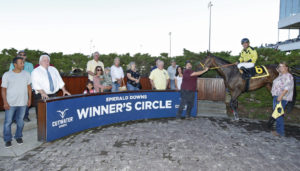 The winner, who paid 13/1, was trained by Candice Cryderman. “Thank our team at the barn for where she is today.”

Annette Marie is by Gold Rush Dancer and that was his first stakes victory. Annette Marie is named after owner John Parker’s late niece. “Thank you Emerald Downs and the Muckleshoot Tribe for continuing putting on the Washington Cup races,” Parker said in the Winner’s Circle.

Driveway finished second for trainer Jose Navarro and the big favorite Miss Dynamic (3/10), who took a brief lead faded to third in the nine-horse field.