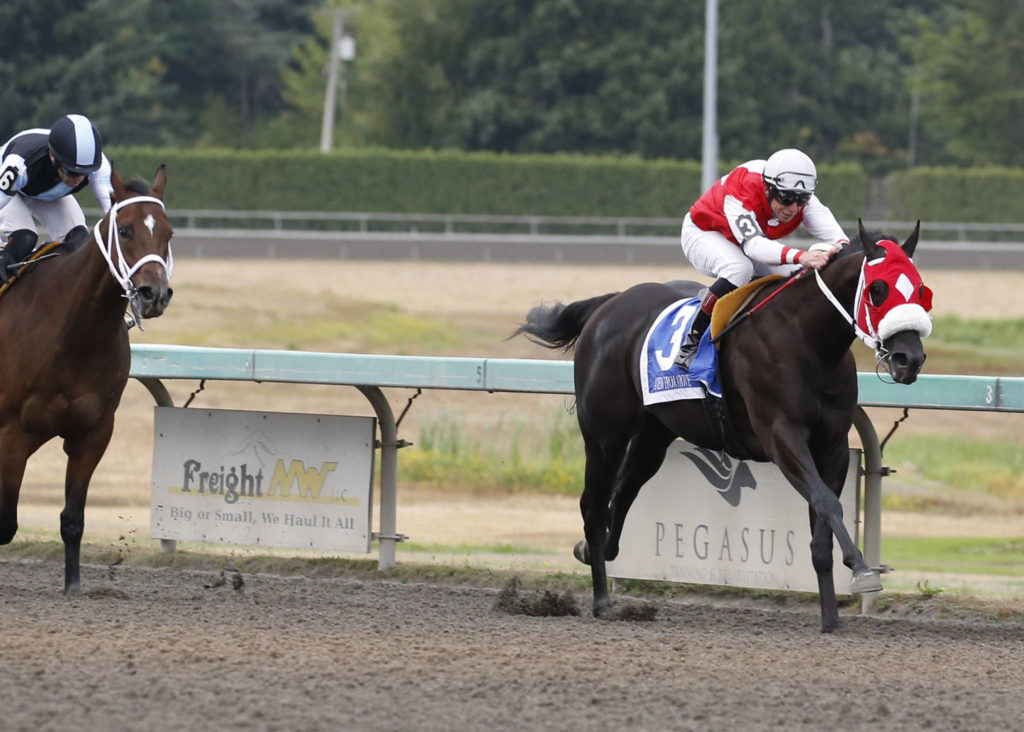 A View From Above

AUBURN, Wash. (Aug. 22, 2021) – A View From Above showed resilience in the stretch, turning back previously unbeaten Cobra Jet and racing to a 1 ¼-length victory in Sunday’s $50,000 WTBOA Lads Stakes for 2-year-old colts and geldings.

“He had a lot of speed, same as first out,” Couton said. “When he got challenged, he fought hard. He found another gear.”

Trained by Kay Cooper, A View From Above races for owners Paul and Lori Heist of Auburn (Grasshoppers Racing Stable) and Doug Stenberg of Renton. Bred by Rick and Debbie Pabst,

In fact, it was a sensational day for Cooper and the Pabsts. Forty minutes after the victory in the Lads, Koron—trained by Cooper, bred by the Pabsts, and owned by a syndication headed by Debbie Pabst—romped by 5 ½-lengths in the $50,000 Barbara Shinpoch Stakes to also remain unbeaten.

A View From Above becomes a top contender for the $70,000 Gottstein Futurity on closing day, September 26. His older brother, Time ’n Time Again finished second in the 2018 Gottstein but was disqualified for interference in the stretch.

Cobra Jet, the 8 to 5 favorite ridden by Juan Gutierrez at 121 lbs., stalked the leader from the opening bell and loomed menacingly into the stretch, but was outfinished in the final furlong and settled for second. A Washington-bred by Curlin to Mischief, Cobra Jet won his first two starts by a combined 20 ¼ lengths

It was a long way back—10 ¾ lengths—Sargent Kline, who rallied from last to pick off third place. Check the Gear, Firing Pin, Decimate and Thunder Music completed the order of finish.

Cooper previously won the Lads Stakes with Brent Goes in 1985 and her late father Jim Penney won the race three times, most recently with Chu and I in 2011. 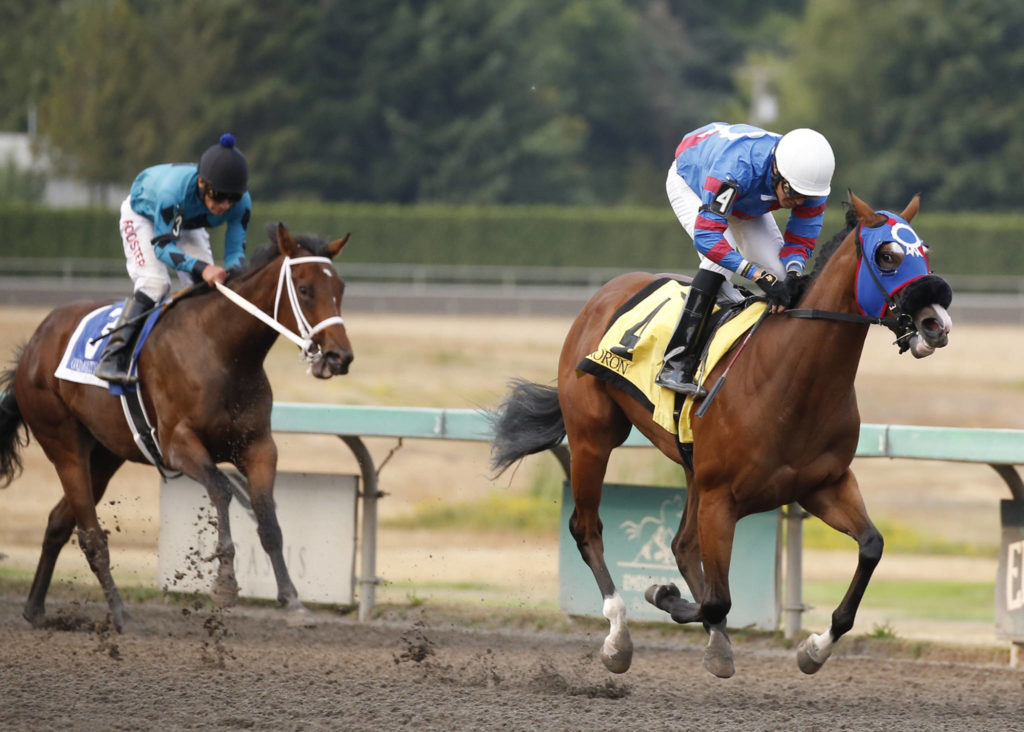 Koron took command on the turn and drew off through the lane for a convincing 5 ½-length victory over Gold N Glitter in the $50,000 Barbara Shinpoch Stakes for 2-year-old fillies.

Ridden by Kevin Orozco at 120 lbs., Koron covered 6 ½ furlongs in 1:19.04 and paid $30 as fourth choice in a field of seven. The victory gave trainer Kay Cooper a sweep of Sunday’s stakes double-header for 2-year-olds.

A Washington-bred by Nationhood-Muchas Coronas, Koron earned $27,225 to boost her total to $38,418. Rick and Debbie Pabst are winning the breeders while Debbie Pabst heads the syndicate—Blue Ribbon Racing Ladies—that owns the bay filly.

Koron is two for two lifetime; she debuted August 7 with a gate to wire victory at 4 ½ furlongs.

As in her debut, Koron showed speed from the gate, but was sandwiched between Gold N Glitter and Pontiffany through opening fractions of :22.98 and :45.93. Letting out a notch around the turn, Koron spurted clear by 3 ½ lengths and sailed uncontested through the stretch to victory.

“I worked her once and I knew she had plenty of speed,” Orozco said. “She ran her heart out today. She won pretty well.”

Gold N Glitter, the 2 to 5 favorite ridden by Javier Matias at 120 lbs., was clearly second best. Although no match for the winner, she was 3 ¾ lengths clear of third place finisher Wegottodrinking.

A $5,000 supplemental nomination, Wegottodrinking closed from last under Alex Anaya to finish third while Pontiffany, Smiling Salsa, Cadillac Margarita and first-time starter Hells Crossing rounded out the order of finish. Akasi and Tyche Awaits You were late scratches. 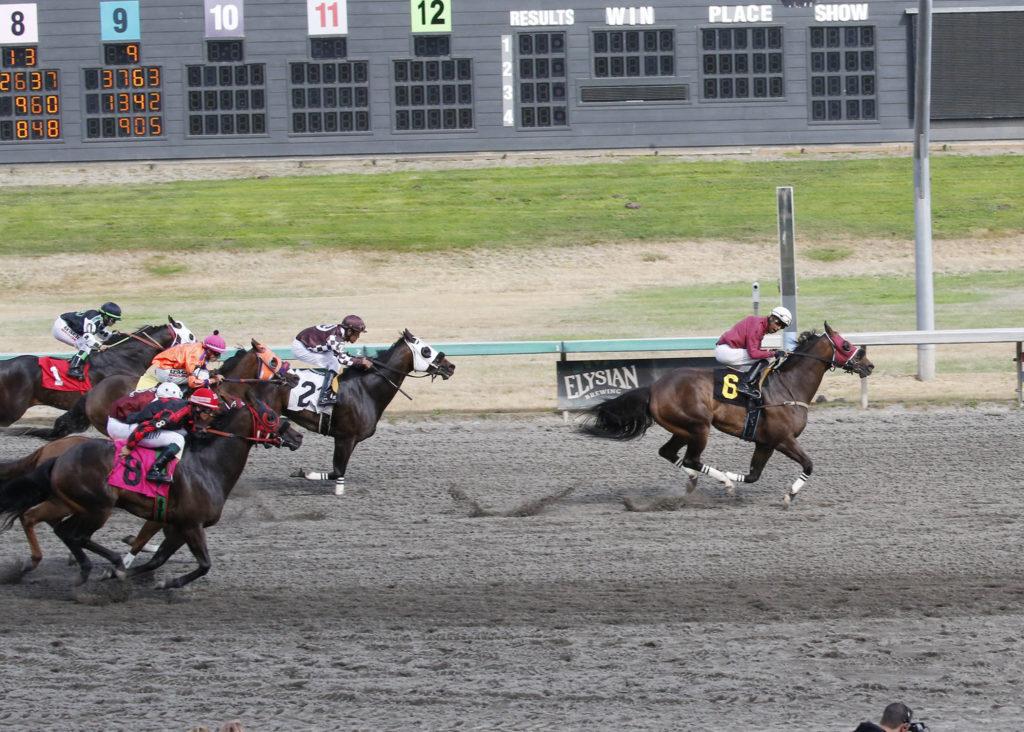 Cm Once Ina Bluemoon delivered a 22 to 1 upset, defeating defending champion and 4 to 5 favorite Cm Boom Shakalaka by 1 ½ lengths while running 440 yards in 22.765 seconds.

Cm Once Ina Bluemoon is four for four at Emerald Downs including wins in the 2019 and 2020 Emerald Downs Distance Challenge at 870 yards.

“When we were close early, I knew we would win today,” Wooten said. “He has a lot of guts, he ran great.”

A seven-time stakes winner for Lowe and Sutton, Cm Boom Shakalaka is 15-4-3 in 34 starts with earnings of $198,235. The 6-year-old Oregon-bred by Carters Cartel had won three of his four previous starts at Emerald Downs.

“A little bit, but (Cm Once Ina Bluemoon) can close,” Lowe said. “He’s a strong horse.” 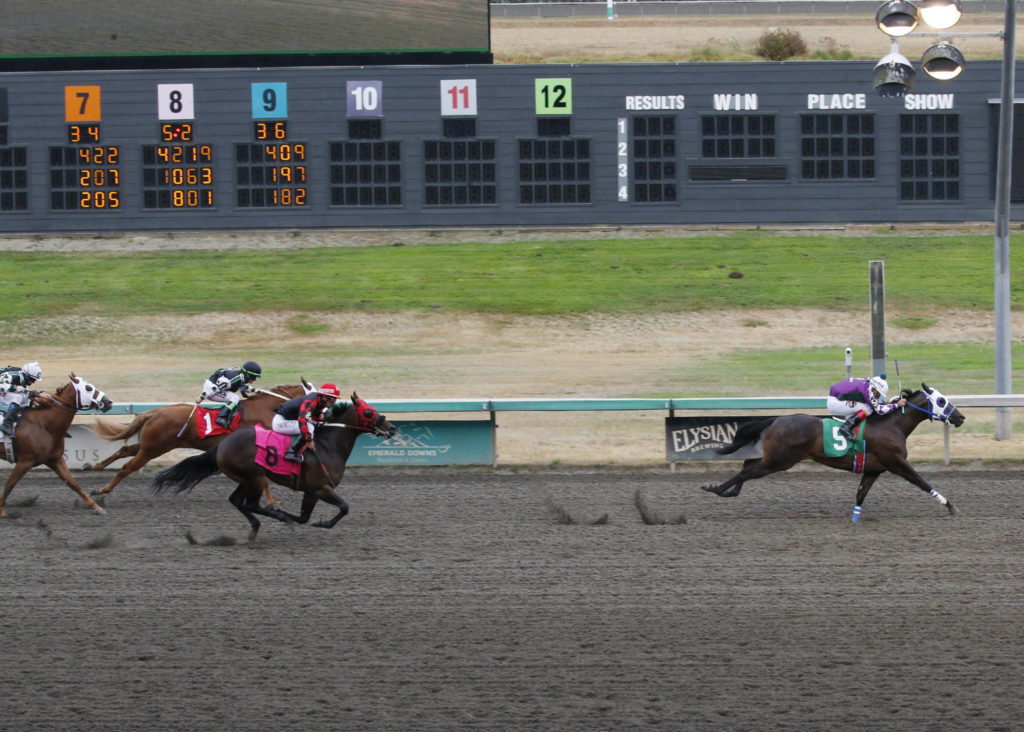 In the $51,519 John Deere Juvenile Challenge for 2-year-old Quarter Horses, Apolinaria Prize turned in a dominating performance, leading gate to wire for a two-length victory in 18.351 seconds for 350 yards. Cesar Moreno was up for trainer Jose Rosales Gomez and owner Juan Manuel Marquez.

A California-bred filly by Fast Prize Cartel, Apolinaria Prize paid $4.40 as the public choice in a field of eight. The fastest qualifier two weeks ago, Apolinaria Prize improved to 3-0-2 from five career starts with earnings of $39,014 including $24,214 for Sunday’s triumph.

“She stood really good in the gate and she flew out of there,” Moreno said. “She was much the best today.”

Leaving Angelz held second by a neck over third place Empowered to Prosper while Eagle Assault, Sonoras Death Row, Cm Rosie At Ta Bar, Uncle Shine and and Like Da Boss competed the order of finish.

NOTES: Mutuel handle totaled $2,147,115 on a 10-race card. . .Kay Cooper is the ninth trainer to win two stakes on the same card at Emerald Downs. Blaine Wright is the only trainer to win three stakes in one day, accomplishing the feat in 2017 and 2018. . . Christine’s Jack ($2.60) won Sunday’s second race by 20 ¾ lengths, the second largest winning margin in track history. Fantastic Day won by 22 ½ lengths on August 5, 2020. . .One winning ticket in the $0.20 Jackpot Pick Six returned $30,384. . .Trainer Rigoberto Velasquez had won with four consecutive starters, including El Maestro ($4.60) and Turnaround ($4.80) in races five and six, before Choteau finished out of the money in race nine. . .Julien Couton rode three winners and is closing in on top spot in the riders’ standings. Through 37 days of racing Alex Cruz leads Couton 61-59, with Juan Gutierrez third with 52 wins. . .Couton leads in stakes wins with four. . .Kevin Orozco has five wins at the meet—three of them stakes including two on Top Executive. . .Finished My P H D (Nationhood-Deja Views), older brother of A View From Above, won Saturday’s sixth race. . . Sherm ($9) scored in the nightcap to give trainer Ken Mathews his first Emerald Downs victory. . .Live racing resumes Thursday with first post 6 p.m.