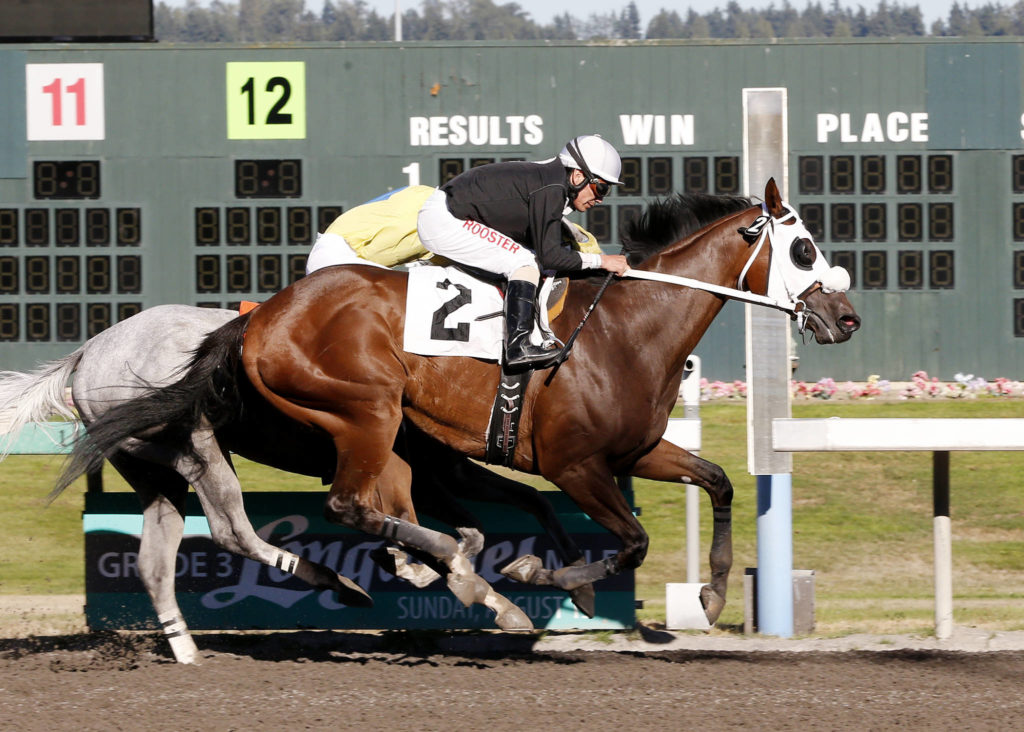 AUBURN, Wash. (Sept. 2, 2017) – There’s No Doubt held off Thorn Legacy in the final strides for a neck victory in Saturday’s $11,300 Muckleshoot Casino Purse for 3-year-olds and up at Emerald Downs.

A 4-year-old homebred by Harbor the Gold-Arco Iris,  There’s no Doubt has won two straight and has an overall mark of 2-1-1 in four starts with earnings of $16,900. He earned the win Saturday, shaking off Salty Minnow after six furlongs in 1:10.64, and then holding off an inside challenge by Thorn Legacy for the victory.

Thorn Legacy, ridden by apprentice David Martin, has run a series of good races for trainer Roy Lumm and nearly got there Saturday. The runner-up paid $4.40 and $2.40.

Cross Creek, the 3-5 favorite ridden by Julien Couton, finished third and paid $2.20 to show, while Salty Minnow, Sneaky Meek, Warspite and One Macho Gambler completed the order of finish.

NOTES: Veteran rider Nathan Haar collected his first Emerald Downs’ victory Saturday with a gate-to-wire score aboard first-time starter Part of the Plan ($16) for trainer Vince Gibson in the fourth race. A 2-year-old Kentucky-bred by Morning Line, Part of the Plan ran six furlongs in 1:10.91. . .Leonel Camacho-Flores rode two double-digit winners—Pre Mo Diamond ($22.60) in race three and Cats Champ ($13.20) in race seven. . .Kay Cooper was the lone trainer with two winners Saturday and is 17-for-75 (22.6 percent) for the meet. . .Jennifer Whitaker and Howard Belvoir combined for their 330th Emerald Downs’ victory as Don’tbeshywillie ($7.20) scored a gate-to-wire victory in the second race. . .Live racing continues Sunday with a nine-race program on Italian Day. First post is 2 p.m. and includes a $1,049 carryover in the $0.20 Pick 7.