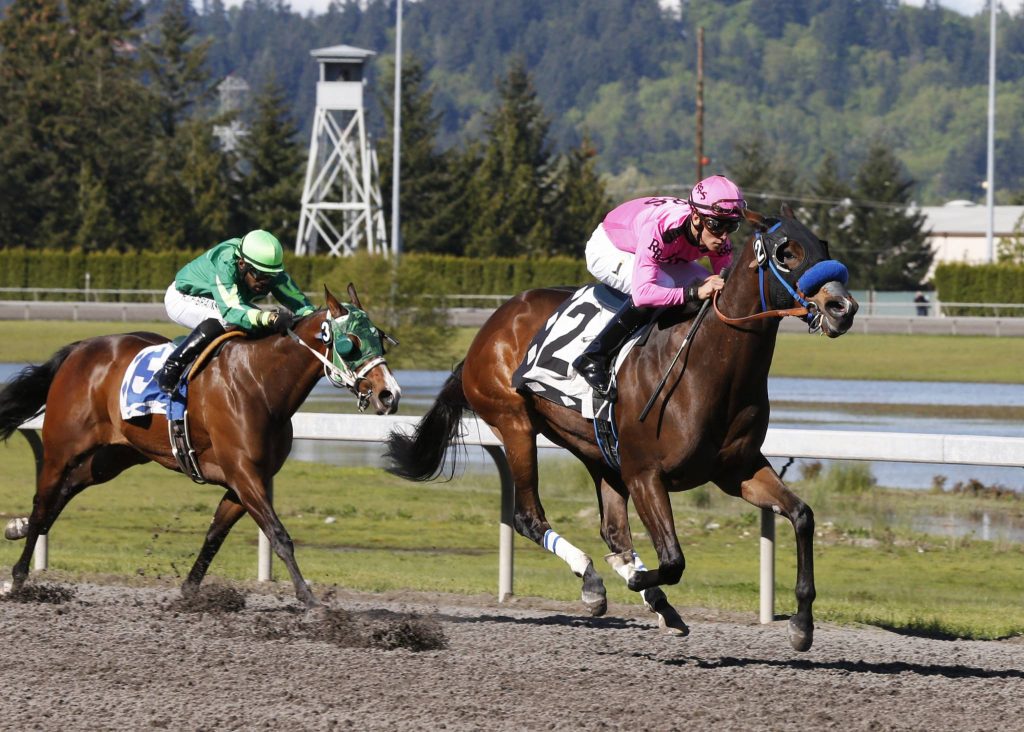 AUBURN, Wash. (May 7, 2017) – Trainer Blaine Wright, who has enjoyed tremendous success with equine millionaire Alert Bay, appears to have another star runner sired by City Zip.

Her name is Alliford Bay, and based on Sunday’s performance at Emerald Downs, the future is bright indeed. Bet down to 3-to-5 favoritism, Alliford Bay shook off a persistent Risque’s Legacy past mid-stretch and drew clear for a 3 1/4-length victory in the $50,000 Seattle Stakes for 3-year-old fillies.

Breaking alertly from the No. 2 post-position, Alliford Bay tussled with Risque’s Legacy through fractions of :21.85 and :44.46, kicked clear a furlong from the wire, and poured it on late for the victory.

A Kentucky-bred by City Zip-Valentine Fever, Alliford Bay cost $150,000 as a 2-year-old in 2016, but she missed an extended period of training with an illness and finally debuted March 25 with a 2 ¼-length on the synthetic racing surface at Golden Gate.

“Blaine did a good job taking her time with this filly, and it’s really paying off,” Orozco said. “She’s the best horse I’ve been on this year.”

Blazinbeauty, last year’s Gottstein Futurity winner, finished well in her season debut to take third and paid $2.60 to show. Isaias Enriquez was aboard at 120 lbs.

Retreat Yourself, Reginella and Getting Joellenned completed the order of finish; Always Enuff was scratched earlier in the day.

NOTES: Trainer Frank Lucarelli saddled two more winners Sunday and leads Blaine Wright 11-10 atop the trainers’ standings. Lucarelli has win on six straight cards and is 10-for-20 this season with apprentice Kevin Orozco. . .Speaking of streaks, Orozco has wins on eight straight cards and is battling defending champion Rocco Bowen for leading rider. Through 13 days of racing Bowen leads Orozco 18-15, with Eswan Flores third with 12 wins. . .Orozco’s older brother Kevin made a successful Emerald Downs debut Sunday with the stakes win aboard Alliford Bay. . .Kevin Orozco will return to California where he is dueling with Abel Cedillo for leading rider at Golden Gate Fields. . .Little Dancer ($40.60) came off the bench to score a 19-1 upset in her 2017 season debut for owner Ron Schmid and trainer Doris Harwood. A Kentucky-bred by Successful Appeal, Little Dancer finished sixth as the 2-1 favorite in her lone start as a 2-yeart-old. . .The previous high for a $2 win payout this year was $38.20 by Keller’s Gold on April 16. . .Jerre to Carrie ($5.40) improved to 2-for-2 this season and 2-for-2 vs. the Emerald Racing Club with a 2 ¼-length victory in race four as the ERC’s Distinguishable finished. On April 22, Jerre to Carrie defeated McDove—also owned by Emerald Racing Club—and was claimed for $15,000 by owner Richard Caswell and trainer Kay Cooper. . .Washington-bred Squeeze Me ($2.20) raced to an easy gate-to-wire victory in the $30,000 Turf Paradise Open Spring Futurity on closing day at the Phoenix track. Purchased for $12,000 by owner/trainer Kevin Eikleberry at the 2016 WTBOA Summer Yearling Sale, the 2-year-old Papa Clem filly covered five furlongs in :58.09. . .In the $30,000 Hasta La Vista Handicap—final race of the season at Turf Paradise—defending champion Blue Bomber and Natasha Coddington finished second as Go Max ($25.80) and Scott Stevens prevailed in 3:11.42 for 1 7/8 miles on turf. Stevens won the riding title with 107 wins while Robertino Diodoro dominated the trainers’ standings with 84 wins. . .Live racing resumes Friday with first post 6:30 p.m.
–##–